(Sacred flower of the Incas) Instead of red flowers, this variety of Cantua buxifolia features long tubular blossoms that are medium yellow with white, trumpet-like corollas. They hang upside down in clusters of 12 or more from mid-green foliage. This long blooming, water-loving South American shrub is popular with hummingbirds and butterflies.

When planted in ground where winters are mild, Sacred Flower of the Incas is a short and sprawling evergreen. In its native lands, this heat tolerant plant is found on the margins of forests. In contrast, it's a favorite for container planting in North America. For best results, give it rich, well-drained soil, regular watering, and a setting from full sun to partial shade.

Mostly known as "Kantu" or "Cantuta" in Peru and Bolivia where it is considered a national flower, Cantua buxifolia also grows in the Yungas mountains of Northern Argentina. Aside from reds and bicolor flowers like White Lightning, some varieties are pink or yellow. Cantua is a Latinization of qantu -- the species' original name from the native Quechuan people of the Andes. Buxifolia refers to the shrub's boxwood-style foliage. Considered sacred in Andean cultures, reddish Kantu flowers often are used decoratively during holy days. Kantu is a word also used to describe musical groups that play Andean flutes similar to pan pipes. 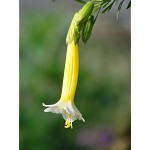 (Sacred flower of the Incas) Instead of red flowers, this variety of Cantua buxifolia features long tubular blossoms that are medium yellow with white, trumpet-like corollas. They hang upside down in clusters of 12 or more from mid-green foliage. This long blooming, water-loving South American shrub is popular with hummingbirds and butterflies.