(Chiapas Golden Fuchsia) Cool, moist and partially shady -- those are the conditions that this tall, rare shrub loves. Once native to the mountain cloud forests of Mexico's southernmost state, Chiapas, Golden Fuchsia in 1986 became extinct in the wild and now is primarily grown by botanical gardens.

Flowers by the Sea is one of the few commercial sources for this plant.

The glowing, yellow-to-orange trumpet flowers sometimes grow more than 2 inches long. They dangle in clusters from long, wiry, burgundy peduncles -- the stemlets that attach the flower clusters to the shrub's branches. The clusters look a bit like modern, chandelier-style lights. As the shape of the flowers indicates, this is a hummingbird favorite.

In the April-June 2000 issue of Pacific Horticulture, Huntington Gardens Curator Kathy Musial says that botanist Dr. Dennis Breedlove in 1972 discovered what would be identified more than a decade later as member of the shrub and tree genus Deppea. Breedlove found his mystery plant in a canyon on the south slope of Cerro Mozotal, a mountain in southern Chiapas.

Musial notes that Breedlove never found the plant elsewhere in the wild. Luckily, he and Brad Bartholomew were able to collect seed in 1981, because the stand of Golden Fuchsia disappeared within five years when the land was cleared for farming.

Although the foggy summers of San Francisco's climate appeal to Golden Fuchsia, a partially shady environment helps it to thrive at Southern California's Huntington, which aided the original distribution of the plant. Our plants are from a variety at San Francisco's Strybing Arboretum.

Golden Fuchsia isn't a member of the Fuchsia genus, which is a member of the evening primrose family (Onagraceae). Deppea species are members of the coffee family (Rubiaceae). Give it rich, well-drained soil and plenty of water.

This is a challenging plant to cultivate, but it is beautiful and in danger of totally disappearing. Helping it to survive is rewarding. 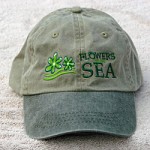 If you love the plants grown at Flowers by the Sea Farm and Online Nursery, share your opinion by wearing an FBTS Garden Cap featuring our logo and a soft vintage look in 100% cotton. Shipping is free with any plant order. 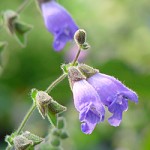 (Himalayan Sage or Kashmir Sage) The word "hians" in Salvia hians means "gaping" and refers to the hanging lip of this sage's flowers, which bloom from late spring through early fall.  This may or may not the "true" species as it is described, hence the term aff or affnis in the name, which indicates that this plant is related to, has an affinity to, but is not identical to Salvia hians. 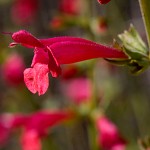 (Crimson Sage) Abundant and long blooming, the bright pink to red tubular flowers of Salvia henryi attract hummingbirds and form a pretty contrast with fuzzy, silvery foliage. This is a long blooming sage that is made for gritty soils, such as sandy loam.

(Blue Black Mexican Sage) This spectacular and hardy native of Central Mexico is exciting to watch as new growth shoots upward rapidly from its root stock in spring. Its large, vibrant, purple-blue flowers bloom for about 10 months and are profuse from late autumn through winter on flower spikes up to 20 inches long.

This plant flowers throughout Winter.

Many winter-blooming Salvias begin flowering in late Fall and continue on into Spring; there is a lot of overlap in blooming seasons for Salvias. Winter bloomers include evergreen as well as deciduous perennial Salvias.

Depending on type, they grow well in USDA Zones ranging from 8 to 11 with some tolerating the chill of Zone 7.