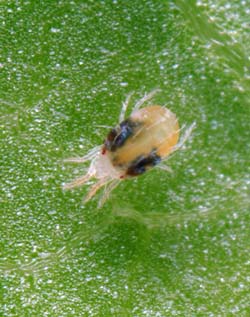 Pollinators lose important food sources when Salvias and other nectar-rich flowering plants are destroyed by spider mites. This is Part 2 of a two-part series about understanding and overcoming these dangerous pests.

Favorite plants are like family members; it breaks a gardener's heart to see them wither and die from spider mite damage. Spider mites are a serious threat to the foliage of flowering plants, particularly in hot, dry climates.

When the leaves of an infested plant touch those of a healthy one, a bridge forms over which these almost microscopically small arachnids walk. Spider mites may also drift through the air on webs they spin.

A vigorous water shower often is all that is needed to knock spider mites off foliage. So we pull out our garden hoses -- water cannons from a spider mite's perspective -- and take aim at their webs as well as their lodging (mostly on the undersides of leaves). But if spider mites persevere despite many watery assaults, it may be time for biological and chemical controls.

Along with the non-chemical interventions described in Part 1 of this series, you may need the help of predatory insects and mites, insecticidal soaps and horticultural oils. Pesticides called miticides may also eventually be necessary, but should be the last resort and the kinds that minimize negative environmental effects.

The use of all these tools requires careful selection and timing. You also need to test chemical substances, both homemade and commercial, before applying them to an entire plant.  Not all sprays are safe for all plants.

Similar to soaps, horticultural oils -- also known as mineral oils -- are old-fashioned weapons for battling garden pests. Some types are refined petroleum products; others, such as Neem oil, come from plants. All are applied as sprays. Horticultural oils are added to water along with an emulsifier that keeps the fluids from separating.

The main way in which petroleum-based horticultural oils kill soft-bodied pests, such as spider mites, is by smothering them. In contrast, Neem oil repels pests, makes it difficult for them to feed and harms their reproductive systems

Less is known about why insecticidal soaps succeed. However, Colorado State University (CSU) reports that these substances may kill spider mites and other soft-bodied pests in two ways -- by removal of protective skin waxes (death through water loss) and by injury to cell membranes.

Soap and oil sprays have to cover spider mites to work. They don't generally harm people or large animals. However, these products can also be deadly for beneficial predatory mites, which are one of the best controls for spider mites. If you plan on releasing predators, don't do so until after you spray. Waiting a day after you spray is a good idea and allows you to monitor success.

Horticultural Oils. These are also 2-percent dilutions mixed with water. Some people make their own with cooking oils of which CSU says cottonseed is the "most insecticidal." Here are more tips:

Finally, if the sprays don't do the job, it may be time to call in the warriors of spider mite removal -- beneficial mites and insects. Remember that although horticultural soaps and oils are considered "soft pesticides" -- ones that don't leave lingering residues harming beneficial insects and mites -- you shouldn't release predatory mites and insects just before, during or shortly after spraying.

Before placing new plants in your garden, it's always wise to let them rest in a partially shady spot in your yard for a week or so before planting. If the plant has been growing in a greenhouse, this process is called "hardening off".  This allows it to transition between its previous growing conditions and those of your garden.

Consider this time a quarantine period as well. Keep plants well spaced in their hardening-off location and monitor them for spider mites and other pests.

Sometimes problems hitch a ride from another environment -- a nursery, your friend's yard, wherever -- to your own yard. Good spacing in the hardening/quarantine area helps to keep pests from moving from one plant to another.

Quarantining is a process that should also occur when you add plants to your indoor collection.

Although we rely on a variety of biological predators to help us with our work, our spider mite experts are Phtyoseiulus persimilis and Amblyseius fallacis, which are commonly known as persimilis and fallacis.

Depending on the company from which you purchase predator mites, it may take about a week for your package to arrive. You need to keep them cool until release.

One important characteristic of persimilis is that it reproduces more quickly than do TSSM. Rincon-Vitova estimates that you need from one to 14 persimilis to consume the spider mites in an average 10-square-foot garden sector. If you have a major infestation, you'll need more.  Multiple introdutions over a course of several weeks are required to quell major problems.

Persimilis are not as cold tolerant or diverse in their eating habits as fallacis, which can handle temperatures down to 48 degrees F and also have a more varied diet, being willing to consume Pacific, European red and Bank's grass spider mites. You'll need about three fallacis for every 10 square feet of garden; more for problem areas.

We buy these predators in trays layered in the bean leaves used to culture their food source - destructive mites. Both persimilis and fallacis need humidity to survive, so it is important to release them on moist foliage. We monitor our plants to look for what Rincon-Vitova calls "pest hot spots".  If we discover one we particularly concentrate the predators in these locations.  Full instructions are included with every order.

Part 1 of this series includes details about monitoring, which involves dividing the garden into sections (let's say divisions of 10 square feet) and methodically sampling a few leaves on each plant in each section to assess the spread and concentration of spider mites. Using a magnifying glass, you view the undersides of leaves and count the pests.

If spider mites are evenly distributed throughout a garden, you space the predator-toting bean leaves evenly throughout the area, placing the leaves on foliage so the predators can easily navigate from leaf to leaf and reach their prey.

One thing you should never do is release a bunch of persimilis and fallacis into your garden if there are few spider mites on which to munch. Doing so might seem proactive, but you waste your money. It will either kill the predators (insufficient food) or cause them to go hunting elsewhere. Also, expect the predators to disperse as they do their job and spider mites diminish in your garden.

What if the spider mites keep returning in force despite repeated releases of predator mites? It may be time to use miticides. However, remember that these poisons kill predators as well, which makes it difficult to balance predator and prey.

This article first appeared in summer 2015, a bit more than two years after the European Union banned use of Neonicotinoid pesticides (neonics) on a limited range of crops due to concerns about the pesticides contributing to honeybee colony collapse. Neonics are broad spectrum products, which means that they kill a wide array of organisms harmful to plants. However, they may also harm beneficial pollinators.

A February 2018 EU research reported on by the UK newspaper The Guardian shows that any outdoor use of neonics poses a “high risk to both honeybees and wild bees” due to subsequent soil and water pollution tainting wildflowers and crops. Consequently, the newspaper stated, the EU plans to expand its ban to all outdoor use (greenhouses will be exempt) by the end of 2018.

Reporting on the expanded EU ban, National Geographic noted that the U.S. Environmental Protection Agency has stopped approving “new outdoor uses” for neonics while it re-evaluates them. Some U.S. cities -- Portland, Oregon, and Seattle and Spokane, Washington -- and the State of Maryland now have varying bans on use of these pesticides.

Aside from damage to honeybees and other members of the bee family (Hymenoptera), here are some important reasons why Salvia gardeners should avoid these long-lingering poisons:

Here are some of the most important rules about using pesticides in an ecofriendly garden:

Pyrethrum and Other Miticides. Anything that kills spider mites commits miticide. But the term is mostly applied to chemical products that target mites but often are broad-spectrum pesticides. Many kill a wide variety of beneficial insects, as well as pests, and persist for a long time in the garden. One example is the family of Pyrethroids.

"Now wait a second," you might say. "Aren't pyrethroids natural pesticides made from chrysanthemums?"

The confusion is understandable. Pyrethrum is an organic product made primarily from the flowers of the Pyrethrum Daisy ( Chrysanthemum cinerariaefoli). In contrast, Pyrethroids -- such as Permethrin -- are synthetic insecticides based on the chemical structure of derivatives from the flower. Both products are highly toxic to insects, but Pyrethrum dissipates rapidly in sunlight. Whereas Pyrethrum causes a highly limited period of damage to good and bad mites, pyrethroids persist in the environment for a longer time.

One word of warning when buying Pyrethrum: If you want an natural product, avoid products containing synergistic chemicals, such as PBO ( Piperonyl butoxide), which makes Pyrethrum's poison more potent.

Spider mites can quickly -- in two or three generations -- become resistant to a particular class of chemical agents. So the more you rely on broad-spectrum miticides, the more different classes you'll have to introduce into your home environment and the more beneficial insects and mites you'll destroy. Increased use of pesticides also causes worries about small children and pets being adversely affected.

Decreasing this resistance requires use of a variety of pesticides in rotation. Our experience tells us that it is better, safer and more efficient to practice an IPM rotation of vigilant monitoring, cultural practices that minimize these pests, biological controls and minimal use of pesticides.

Being Patient and Persistent

When trying to solve any difficult problem, patience and persistence must go hand in hand. Don't scream about the mites in your garden; keep battling them in the greenest way you can.

When you need a boost, email or give us a call. We'll be here to listen to your frustrations, provide advice and encourage you to persist.

Spider mites, known scientifically as Tetranychidae, are stealthy robbers that strike and ruin foliage during hot, dry weather. Even drought-tolerant plants are susceptible to their attacks.

Drought-resistant plants aren't necessarily resistant to spider mites. Hot, dusty conditions make it easy for mites to proliferate. You may have spider mites if you see the following signs:

During prolonged drought and in naturally dry climates, drought-friendly plants may also be mite friendly if the plants become unhealthy. Even the least thirsty plants become limp if their minimal needs for water aren't met on time. Keeping plants healthy with limited but timely watering is the first early defense against mites.

Although you may water with a drip system, sometimes it's necessary to spray plant foliage and soil. This is a powerful defense against mites.

When healthy, foliage stabilizes leaf moisture through tiny, valve-like stomata on the bottom sides of leaves. The stomata open to release excess moisture and plant waste products; they close when water conservation is necessary.

However, spider mites pierce leaf surfaces to extract plant fluid and tissue. These holes make it difficult for plants to control water loss. Spraying the tops and bottoms of leaves starves mites by knocking them off their food source -- your beloved drought-tolerant flowering plants.

Please contact us at FBTS if you need more advice.