Salvia spathacea 'Topanga'
(Topanga Hummingbird Sage or Pitcher Sage) Rich pink flowers surrounded by fuzzy, burgundy and green bracts are two of the reasons why this is one of our favorite kinds of Hummingbird Sage. We also love its vigorous, wide-spreading growth.
Rated:

(Sao Borja Scarlet Sage) Three-inch-long, smokey purple blossoms that bloom from spring to fall are a major clue that this heat-tolerant perennial is not your grandmother's Scarlet Sage.

(Burgundy Scarlet Sage) Blood red to burgundy, the drooping blossoms of this sturdy, long flowering Salvia are the first that anyone comments on in a mixed planting. Use it singly as a dramatic garden accent or container plant; mass it for a stunning effect.

(Faye Chapel Scarlet Sage) A vivid red, the drooping blossoms of this sturdy, long flowering Salvia are large and numerous. Use it singly as a dramatic garden accent or container plant; mass it for a stunning effect. This is an heirloom plant from the Atlantic Coast, where it has been grown as a hummingbird plant for decades.

(Tubular Chilean Sage) Foggy days and moderate temperatures are the norm for this low-altitude, coastal mountain sage from northern Chile and Peru. It is grown as much for its handsome foliage as for the deep cranberry of its tiny, tubular flowers. 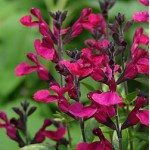 Salvia VIBE 'Ignition Fuchsia'
(VIBE® Ignition Fuchsia Sage) A perfect companion to our Best of Breed 'Ignition Purple', Ignition Fuschia has velvety deep fuschia pink flowers that are rare in a Jame Sage hybrid. They bloom spring to fall for your enjoyment.
Rated:

(Pink & White Wagner's Sage) Instead of pink, leaf-life bracts, this variety of Wagner's Sage has white bracts surrounding the hot pink flowers. It blooms from November to March on our coastal Northern California farm where it feeds Anna's hummingbirds all winter long. 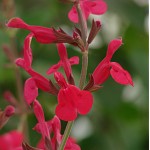 (Light Pink Joy Sage) Salvia x 'Alegr­a Light Pink' is one of the most vigorous new plants at Flowers by the Sea.  It is a South American introduction from Roland Uria, an agronomy professor and plant researcher from Buenos Aires, Argentina. This select clone is a soft light pink shade.

(Anthony Parker Bush Sage) Floriferous spikes of dark blue to purple flowers bloom midsummer to fall on this tidy, mid-height subshrub that grows as wide as it is tall. 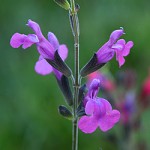 Salvia x 'Arctic Blaze'
(Arctic Blaze® Purple Sage) Bred to be a strong grower while remaining hardy, this new hybrid Sage has some of the best characteristics of both of it's famous parents. Pollen from Salvia microphylla 'San Carlos Festival' was used on flowers of Salvia lycioides x greggii 'Ultra Violet' and one of the resultant seedlings became Arctic Blaze Purple.
Rated: 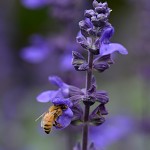 (Big Blue Sage) This new seed-grown strain can best be described as a much improved Indigo Spires Sage. It has deep blue-green, corrugated leaves and lots of deep blue flower spikes that bloom from summer till the end of the growing season. 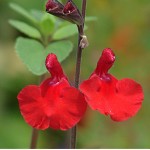 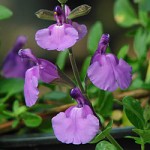 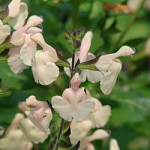 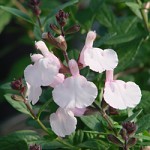 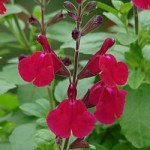 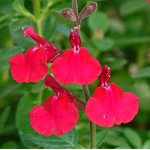 Salvia x 'Elk Screamin' Scarlet'
(Elk Screamin' Scarlet Sage) Wow. No, double wow. This brilliantly colored new variety is nothing short of stunning. The glossy green leaves are the perfect foil for the flowers, which at times are so numerous that the are all you can see.
Rated:
Show
Sort by
4 5 6 7 8
145 to 168 of 191
Refine Results