As the stems grow taller, more whorls appear. In contrast to Leonotis menthifolia, this variety of Mint Lion's Ear has heart-shaped leaves. The forest green of the foliage quiets the floral heat.

Although native to Africa, this fragrant member of the mint family has naturalized in the American South where it grows easily in weak soils, such as along gravelly road shoulders. In Afrikaans, a klippie is a small stone, so that may be where this long-blooming plant gained the "Klipp" portion of its South African common name.

Historically, Africans have used Lion's Ear species medicinally to sooth coughs, dysentery, fevers and headaches. Although some Africans smoke various forms of Leonotis and call it Dagga -- also slang for marijuana -- the Cannabis genus is unrelated and contains different chemicals.

As to the scientific appellation nepetifolia, it indicates that the plant's foliage is similar to that of Nepeta or Catnip, another mint family plant.

Mint Lion's Ear grows easily and tolerates both heat and drought. It is a tall, wide subshrub, which means that it combines soft herbaceous perennial growth with some woodiness. Use it as a screen or background planting in full sun locations. 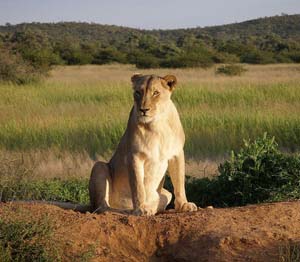 Orange is an aggressive color in the garden. It doesn't purr. The fuzzy, shaggy, hot orange flowers of Lion's Ear (Leonotis) growl for attention. Their stems are so tall that they may reach up to 6 feet, towering over the foliage like gawky Dr. Seuss blossoms. You'll find them at Flowers by the Sea Online Nursery.

This herbaceous plant is known for its use in folk remedies.

Salvias have been used as healing herbs by a wide variety of cultures in the Americas, Europe and Asia. The genus name is from the Latin term “salvare,” which means to save.

When considering application of an herbal remedy to treat a medical problem, be sure to consult a physician first.

When growing a fragrance garden, this is a good selection.

Most Salvias have pleasant scents, but some are intoxicatingly fragrant. Some are short enough for border plantings that release a heady perfume as you brush against them when strolling along a path. Other taller types make good landscape highlights, particularly by doors where their scent can be enjoyed on entry and exit.