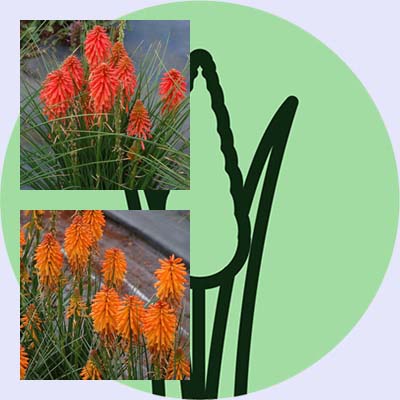 Poco means "little" in Spanish. However, perennial Poco Kniphofias pack plenty of punch in the garden, because these clumping perennials tolerate summer heat, survive winter chill, are long blooming and have foliage that stays attractive despite wind.

Flowers by the Sea is one of the first nurseries to grow both these short, tidy and powerfully hot-colored Kniphofias -- solid-colored red and orange hybrids -- from the dwarf Poco Series developed by Terra Nova Nurseries of Canby, Oregon.

Aside from the Pocos, Terra Nova's innovations include its dwarf Popsicle Series of bicolored hybrid Kniphofias, which have been a big hit with FBTS customers.

Similar to the genus overall, the Pocos and Popsicle Kniphofias are full sun plants that aren't picky about soil type but appreciate supplemental watering if rainfall is in short supply.

Surviving Cold and Heat
Both the Pocos and the Popsicles resist heat and are reliably cold tolerant to USDA Plant Hardiness Zone 6 where the average minimum winter temperature is -10 F.

Heims notes that Terra Nova is conservative in predicting winter hardiness. Based on field-testing of products by nurseries and gardeners worldwide, he says, the company knows that its plants sometimes withstand colder winters than those specified.

For example, he says that Terra Nova has successfully tested a number of its Zone 6 plants in Alberta, Canada, which is rated as Zone 3 but has a long lasting layer of winter snow to insulate soil.

FBTS also grows a number of Terra Nova hybrid Agastaches -- including the Kudos Series -- that are similarly adaptable to a variety of growing conditions, including heat and cold. Their rainbow of colors --including coral, orange, pink, and yellow -- works well with the Poco and Popsicle Hot Pokers.

Listening to Gardeners' Complaints
Heims studied broadcast communications in college while also developing a passion for plants. By graduation, he had amassed 1,200 tropical houseplants and established a houseplant retail/wholesale company in Portland, Oregon.

By 1995, he and Terra Nova co-founder Ken Brown, were accomplished hybridists of outdoor as well as indoor plants when they purchased their Canby nursery.

Heims became comfortable giving presentations about horticulture. To gather information for future plant development projects, he says, he would always ask his audience for feedback about any negative aspects of plants he discussed.

This caused him to discover that growers and gardeners disliked the short growing season and "haggard" foliage of full-sized Kniphofias tattered by wind. Consequently, Terra Nova focused on creating longer blooming Hot Pokers that would be shorter and have foliage less likely to fold and tear.

Whereas K. uvaria blooms May to June, the Popsicle Series blooms spring to fall and the Pocos flower summer to fall. Their shorter foliage suffers less damage from wind and weather. Adaptable both to dry and wet conditions, they are popular in xeriscaping, which is the art of waterwise gardening that responds to changeable conditions.

Burning But Never Flaming Out
When first introduced to horticulture in England in the 1700s, Kniphofias surprised gardeners with their tall flower spikes ending in elliptical globes of blossoms so hot colored they practically seemed to burn.

So the genus inspired common names related to fire. By 1897, Harvard University published Favorite Flowers of Garden and Greenhouse in which Kniphofias were referred to as "Flame Flowers." Nowadays, we mostly call them "Poker Plants" -- as in fireplace pokers -- or "Torch Lilies."

As to the scientific name, German botanist Conrad Moench (l745-1805) named the genus for German botanist Johann Hieronymus Kniphof (1704-1763), a professor at the University of Erfurt who established a large herbarium.

Feeding Wildlife and Answering Questions
At Flowers by the Sea, we love the color, form and function of Poco and Popsicle Hot Poker plants. By function, we aren't simply referring to how well they work in borders or containers. We appreciate the way they attract and feed butterflies and hummingbirds.

If you have questions about Kniphofias or any of the many excellent wildlife garden plants grown at FBTS, please call or email us. We're glad to help you create a flaming beautiful landscape to feed the eye as well as hardworking pollinators.