Your cart is empty.
You are here    Flowers by the Sea / Everything Else / Tweedia caerulea
Details
Ratings & Reviews
Cultural Icons
Related Products
Send to friend

(Blue Milkweed) It's not unusual to see the sky-blue, star-shaped flowers of Tweedia caerulea tucked into bridal bouquets. Yet they are members of the humble milkweed family Asclepiadaceae.

Blue Milkweed is a heat-loving species that grows best in a location with full sun and access to a bit of shade. It is native to Uruguay and Southern Brazil and can be planted as a perennial in USDA Cold Hardiness Zones with moderate winter weather. However, it works well as an annual in other zones. You can encourage branching by pinching the flower buds back when growth is young.

Other common names for Blue Milkweed include Southern Star, Star of the Argentine, Silkpods and Star Flower. Another scientific synonym is Oxypetalum coeruleum. Sometimes its petals have lovely purple speckles.

This milkweed is widely grown in New Zealand to provide nectar and host caterpillars for Monarch butterflies.

Caerulea is Latin for blue. In contrast, the genus name honors James Tweedie (1775-1862), the Scottish gardener and plant explorer who found the species in South America during the first half of the 19th century. At the age of 50, Tweedie immigrated to South America and traveled throughout the continent collecting plants to send back to Scotland. He is best known for introducing wild petunias to Europe, which became wildly popular hybrids worldwide.

From short perennials that form dense mats spread by underground stoloniferous roots to thickets of medium-size shrubs, many Salvias are efficient ground covers.

(Caucasus Sage) This hardy ground cover sage grows 4 to 12 inches tall and 12 inches wide. The velvety white fur of its foliage aids moisture retention. Its soft, royal purple flowers make it stand out. We think this Salvia deserves to spread far and wide.

(Scorching Pink Mountain Sage) Compact and small, this Mountain Sage is another fine groundcover for Southern California, the Southwest and Texas. Similar to Salvia microphylla 'Heatwave Glimmer', it not only survives but thrives in extreme heat. 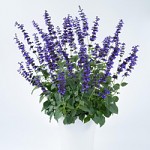 Pure Joy!!! I've enjoyed watching this burgundy salvia develop across the summer-- continuously getting taller and bushier. Now that August has arrived, there are dozens of blooms springing forth from the plant, which has spread nearly 4 feet and is 3 feet tall. Day by day the exact colors...

Lee Burns
Flowers by the Sea is one of my favorite nurseries; buying plants from them reminds me of kennels that raise puppies in the house as family dogs until they are old enough to sell: these are well loved plants: well grown, well documented, well shipped. Pop them in the ground and stand back. I...
Katie Percy
I received my second order of great looking plants - they were sent on Monday and didn't arrive until Friday - only slightly limp; I said \"great looking\" because they were thick, bushy and very healthy looking.
Doris Wilkinson

bought 12 salvia plants, mostly salvia leucantha. was delightfully surprised at the size and quality of my plants. if these do well in the southern california desert sun, i'll be back for more...lost more.

Yesterday was like Christmas morning and Independence Day rolled into one! My plants arrived from Flowers By The Sea. As I unwrapped each carefully wrapped plant, I found myself "oohing" and "awing" as I saw each plant. I've been a customer for many years, and I will...

Melissa P
I was very impressed with the careful packing when I opened the box with my blue anise sage! 4 out of the 6 plants already had beautiful flowers! One stem had completely broken off at the base. I emailed fbts and got a prompt reply that it would be replaced. I will order from them in the future!
Shelly Hales
The Salvia \"Anthony Parker\" that I received were big, healthy, blooming and multi-stemmed! My only suggestion would be for the plants to be a little less root-bound when shipped, as it makes roughing them out for transplanting stressful for me -- and the plant? The Puya alpestris are...
dave sherron
Submit a Testimonial
Read More