Your cart is empty.
You are here    Flowers by the Sea / / A Gardeners Guide to Hummingbird Sage...

A Gardeners Guide to Hummingbird Sage 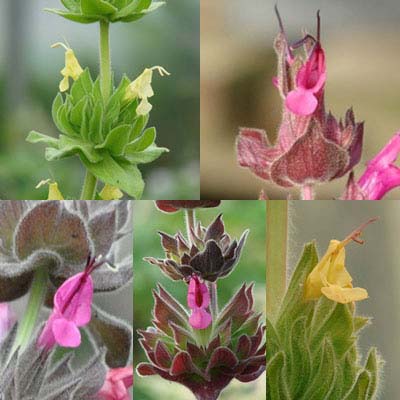 Imagine: You're outside in the garden on a quiet summer morning. The sun has just began to warm the earth in your beds when a bright flash catches your eye, accompanied by the whirring of wings moving almost too fast to see. A sparkling iridescence glints in the morning sun, jewel-like colors winking as a tiny head dips in and out of a nearby blossom.

As any gardener knows, there's nothing quite like observing hummingbirds zipping from flower to flower. But these gorgeous little creatures aren't just fascinating to watch; they're also beneficial pollinators. In fact, about 150 species of North American plants rely on hummingbirds for pollination, according to Purdue University. The most effective way to attract hummingbirds to your yard is by planting the flowering varieties that they love.

Among the hummers' favorites: Salvia spathacea, commonly known as Hummingbird Sage. As it's name suggests, this California native produces a hummingbird's flower of choice. It blooms from late winter through summer -- and sometimes again in Fall -- usually with rose-pink to magenta blossoms, but sometimes yellow or apricot gold. Available in a number of varieties at Flowers by the Sea, this robust perennial not only attracts hummers with its abundant nectar but also by being easy to grow and enhancing landscapes with its aromatic blooms and fragrant evergreen foliage.

Also known as Pitcher Sage, Saliva spathacea is endemic to the California coast, with a range that stretches from Orange County to the Napa Valley. One of 18 sage species native to California, this drought- and salt-tolerant plant often grows wild on bluffs overlooking the Pacific Ocean.

Salvia spathacea also flourishes in the dry duff underneath strands of coast live oaks (Quercus agrifolia). In these dappled-to-shady woodland conditions, S. spathacea spreads by underground runners or rhizomes, forming a dense mat of dark green, arrow-shaped, pubescent foliage that can reach up to 100 feet in diameter. Though this salvia also thrives in full sun, its drought-tolerant nature allows it to succeed where most other shade plants would wilt due to lack of water.

When in bloom from February to July, S. spathacea forms 3- to 4-foot-tall spikes covered with clusters of 10 to 20 brilliant rose-red blossoms atop magenta-to-brown bracts. Hummingbirds flock to these fragrant flowers, drawn by their bright color and tubular shape that's a perfect match for their tiny, slightly curved beaks. Once discovered, these nectar-rich blossoms bring out the hummers' territorial instincts; it's not uncommon to see several of the little birds laying claim to – and then battling it out over -- a particularly desirable patch.

S.spathacea was first introduced into cultivation in the early twentieth century by Thomas Payne, a British horticulturalist who was committed to preserving California's native flora. Payne's 1941 seed catalog describes hummingbird sage as “a robust growing plant with large handsome leaves and spikes of red flowers.”

S. spathacea is still a popular landscape choice almost a century later; in fact, it might just be our favorite member of the Salvia genus! In the home garden, it spreads slowly to form a colony of gently mounded foliage. Under favorable conditions, S. spathacea can grow to about 4 feet wide topped by flower spikes of similar height.

Salvia spathacea is hardy to at least 20 degrees Fahrenheit, or USDA zones 8 to 11. It thrives in full sun to partial shade exposures and tolerates a range of soil types, though it prefers rich, well-drained humus. As with other native California Salvias, fall is the best time to plant S. spathacea. The warm soil and milder weather allow plants to develop a strong, deep root system.

Water your S. spathacea deeply every two to four days for the first month after planting, then decrease to once every two to four weeks, depending on soil type and natural rainfall. Once established, this sage tolerates drought, though it flourishes with regular irrigation during the dry season.

S. spathacea doesn't require much maintenance, but you can prune back to new growth in late winter or early spring. Year-round pinching or light pruning helps to keep this sage looking neat and tidy. As for feeding, a shovelful of organic compost helps Salvias through the winter.

S. spathacea is a perfect choice for rock gardens, borders, beds or anywhere you want to attract hummingbirds and other beneficial pollinating species. Its aromatic, deer-resistant foliage make it a desirable addition anywhere you want texture and scent, while its spreading form is an effective control against erosion and run-off. Plus, even after its bright blooms are gone, S. spathacea's calyxes remain a deep red, providing long-lasting color to the garden.

In addition to the pure species, we also offer select varieties in a range of sizes and colors. Here are some examples.

This selection is so large it commonly is known as Giant Hummingbird Sage and makes a spectacular accent plant. Powerline Pink was selected in 1993 by horticulturalist Burt Wilson. It stands up to 4 feet high before it even flowers, but this super-sized sage adds another 3 feet of height when it produces its flower spikes!

Speaking of flowers, 'Powerline Pink' produces gigantic, lustrous deep-pink blossoms that grow in clusters atop its dramatic spikes. The hummers can't resist these highly scented, tube-shaped blooms; bees and butterflies will also frequent them, if the hummingbirds let them. Under optimal conditions, this salvia blooms in Fall and winter.

'Powerline Pink' is hardy in USDA zones 8 to 11. It thrives in full to partial shade and rich, loamy soil and requires low to moderate irrigation once established.

'Las Pilitas' thrives in less-than-ideal conditions; it tolerates drought, heat, clay soil, and even seasonal flooding. It prefers full to partial shade and is hardy in USDA zones 8 to 11.

Salvia spathacea 'Topanga' is a naturally occurring selection from the Santa Monica Mountains just north of Los Angeles. Named for the canyon in which it was discovered, this fast-growing variety can spread into a mounding mat up to 18 inches tall and 12 feet across.

Perfect for use as a ground cover, Topanga blooms in spring with large clusters of pink blossoms atop 3-foot-tall spikes that act as hummingbird magnets. This variety grows best in full to partial shade and rich, well-drained soil. Like the species, it's hardy in USDA zones 8 to 11 and requires low to moderate irrigation once established.

If you're looking for something a bit different, Salvia spathacea 'Avis Keedy' adds a flash of canary yellow to the landscape. With its broad, fruit-scented foliage and bright blossoms, this variety is the perfect choice for dry, shaded planting sites.

Like the species, Avis Keedy attracts hummingbirds and other pollinators. It spreads to 2 feet wide with a similar height, and its spikes add another 2 feet of height. This sage's clear, lemon-yellow blossoms, cradled by lime-green bracts, fade to cream as they age, creating a gentle palette through the season.

Avis Keedy grows well in sunny coastal gardens and thrives in light to partial shade inland. It prefers low to moderate irrigation and rich, well-drained soil and is hardy in USDA zones 8 to 11.

Commonly known as Apricot Hummingbird Sage, Salvia spathacea 'Cerro Alto' attracts hummers with its lustrous blossoms in a warm, golden orange. This clone – one of the most vigorous growers we've seen – spreads up to 3 feet wide and 2 feet tall, while its flower spikes add another 2 feet of height.

With its large blooms and aromatic leaves, Cerro Alto is a welcome addition to any hummingbird garden. For the best results, plant it in sunny to partially shaded sites with rich, loamy yet well-drained soil. It's hardy in USDA zones 8 to 11.

When it comes to Hummingbird Sage, it may be true that “if you plant them, they will come.” But we offer many hummingbird favorites to help you can make your garden an inviting destination for these amazing little creatures. Hummers are attracted to landscapes that include a variety of welcoming components, such as: trees for nesting and resting; gardens that incorporate a mix of native plants; a source of drinking water; and flowering plants that bloom with brightly colored, tube-shaped blossoms.

If you have questions about S. spathacea, other hummingbird plants, or developing a wildscape for many kinds of pollinators, we have information to share. Please call or write to us at FBTS.

We ordered plants from Flowers by the Sea and are very happy. Except for one, they arrived in good condition. The service and attention to detail was excellent and we highly recommend. Waiting now for the rainy season to kick it into high gear. I think that will really push them forward.
Susan Miller
Have been ordering plants for 3 years and have never received an improperly packaged plant or had a plant die. Love their instructions and information about each plant. Have had to call on two occasions and talked to a real person who answered my questions. Love their website.
Sharon
I received my first order (of salvias) three days ago - they came to North Texas via regular mail and look great. They are large, no leaf drop, and are already over the 'not so perky' phase that comes with being shipped; several have open blooms already. I appreciate the very reasonable prices...
Doris Wilkinson
All of the plants arrived in excellent condition and are thriving beautifully in my South Carolina garden
Hutchinson D. Cummin
My plants arrived in excellent condition! They are bigger and better than any plant I've ever ordered, by far. One plant could not be shipped so I called, and their customer service rep was SO polite and helpful. I'll definitely place more orders with them!
Kathy Gill
Purchased plants as part of \"grew too much\" sale; plants arrived in good condition, and are adjusting well to the new home.
Linus

Dear customers, I have been purchasing from flowers by the sea for years know and I am very pleased . A great company to deal with on any issue , the customers comes first! Great job

Terry heslin
What beautiful, tenderly cared for plants, and so carefully packed. I've never seen anything quite like it. Your love for your plants is contagious. Now I love them too. Thank you.
Ann

Randy Collins
I cannot rate this company highly enough! Wonderful web site, endless interesting varieties, excellent service, and strong, healthy plants which arrive ready to grow practically right out of the box. I wholeheartedly recommend Flowers by the Sea to all my gardening friends, and only wish I'd...
Mary Jo Ballator
Submit a Testimonial
Read More