Ask Mr. Sage: When Is It Too Late for Autumn Planting? 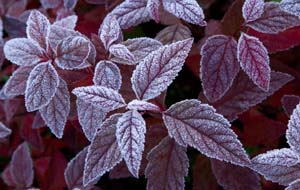 Dear Mr. Sage,
When is the best time for planting in autumn? How do you know when it's too early or too late for putting plants in the ground? My brother and I disagree about timing even though we both live in USDA Zone 7. He's in Albuquerque and says it's okay to plant throughout the month of November. I live in Richmond, Virginia, and think the best window is from the last week of September through the first week of October.

Can you help us settle this argument?

Sincerely,
Riled Up in Richmond

Dear Riled Up,
Both arguments have their points, but neither is quite on target. First, remember that although you both live in roughly the same USDA Cold Hardiness Zones — Richmond is 7a and Albuquerque is 7a and 7b — those classifications only govern average winter low temperatures.

Our guideline is to wait until daytime temperatures have cooled and are less than 80 degrees F before beginning to plant. Then we stop planting about a month before first frost or first freeze usually occurs. For our mild, coastal area, the National Oceanic and Atmospheric Administration predicts a 50 percent chance of first frost by the end of the first week of November, which means that we likely would quit planting by early October depending on local conditions.

Instead of state lists of data for communities with NOAA climate stations, the agency now provides nationwide maps estimating regional dates for first freeze at the end of the growing season and last spring freeze based on historical data. It's difficult to isolate and size up localities on the maps, which are identified by dots that are color coded to represent different date ranges. An easier way of getting to the federal data is via the homesteading lifestyle website Morning Chores, which suggests two ways to estimate frost dates.

One estimation method is based on USDA Plant Hardiness Zones, which range from Zone 1 (coldest winters) to Zones 10 to 13 (warmest winters). According to the USDA data, if you garden in a Zone 7 area, your first frost date range likely is October 29 to November 15. But as Morning Chores notes, the Hardiness Zone Method is less precise than the NOAA Climate Station method, which is based on historical data and three predicted levels of risk — 90, 50 and 10 percent. (Our comments in this article are based on NOAA's dates for 50 percent chance of a 36 degree F first frost versus a colder hard frost.)

To access the NOAA estimates, all you have to do is input your zip code, city, or state in a search bar at Morning Chores. For example, Albuquerque has 37 zip codes, the first of which is 87101. Inputting that zip in the search tool results in a first frost estimate of October 28. Richmond has 36 zip codes, and the first is 23173, which brings up a first frost date of October 22.

Giving plants at least a month to establish roots before first frost helps anchor them so they aren't damaged by frost heave during freeze-thaw cycles. As water in the soil freezes, it causes the ground to expand. Poorly rooted plants may rise up during freezes and not settle back into the ground when it warms. Exposed roots become damaged.

As the ground freezes —something that usually doesn't happen until well after first frost — it becomes difficult to dig soil and replant what has heaved up. The National Snow and Ice Data Center provides an excellent explanation of how ground freezes.

Based on NOAA first frost predictions for both Albuquerque and Richmond, it would seem that the best cut-off time for planting in both your cities would be during the last week of September. That would give plants in both locations at least four weeks for root stabilization. However, you also need to consider predictions of daily temperatures, because — as already indicated — it's best to wait for temperatures to decrease to the 70 degree range before planting in autumn. One major weather reporting website we accessed estimates that for 2020, daytime temperatures in both Albuquerque and Richmond will consistently be less than 80 degrees by the last week of September so that's good for both of you.

Although your brother likely will have good planting temperatures in Albuquerque until the end of October, his plants won't be well established to withstand heave if he waits that long to plant them. He has a shorter window of opportunity than he realizes, but please try not to get too uppity with him about being right.

Thanks for your question. It helps gardeners nationwide, who can use the links and process provided here for determining their windows of opportunity for planting. If you need more advice, please feel free to email or call us at Flowers by the Sea.

Note: Adjustments to this article are due to changes in temperature and frost data since first publication in 2014.

I'm very impressed with the quality of you're plants. The five or six I've ordered the past two years are thriving . I will continue to order from you as long as I have room in my garden. Just a great website to have discovered ! Thanks, Spencer
spencer cornish
Clearly I am addicted to Flowers by the Sea! I think I've just about ordered at least one of everything! The plants are all super healthy, and arrive in great shape owing to the (patented?) packing method. The hummingbirds, bees and butterflies are in 7th heaven. I HIGHLY recommend FBTS...
Laurel Burik
From Coast to Coast in 3 days!So happily excited I was to receive my order Wed. Oct. 23, Charleston, SC.I placed my order on 10/19 & was notified of tracking # as expected but sometimes don't get. I knew UPS would have it here, SC by Thursday but it arrived early by a day. Yippy. The pkg....
Marie Lewis
Incredible customer service attended to by Kermit himself!Carole - Taylors/Greenville, SC
Carole Harrison
This was my first order with Flowers By The Sea. I purchased two of the Salvia vitiifolia plants. Even though it took a while for the plants to be ready for shipment, it was well worth the wait. My first move was to transplant them into larger pots until I can make up my mind where I want them in...
Roy Belletto

Deborah Garcia
I recently bought 5 salvias in two varieties. I was impressed on how quickly they came and how carefully packaged they were. I cant wait to watch them mature, and will defiantly be buying more from you in the future! Thanks!
Elizabeth Thompson

Laura D Alexander
Thank you, thank you, thank you! I love my Echium 'blue steeple'! I received the plants healthy and ready to transplant. I will definitely be a repeat customer...
Nancy Barsotti
I just received another order of BeautifulSalvias from Flowers By The Sea. The plants are large and healthy in perfect condition. I really can not say enough positive things about Kermit and Vikki!You will not find better salvias or better service anywhere.I have ordered a number of thimes since...
Rose Hodges
Submit a Testimonial
Read More