Your cart is empty.
You are here    Flowers by the Sea / / Bedding Plant Royalty: Splendid Salvia Splendens... 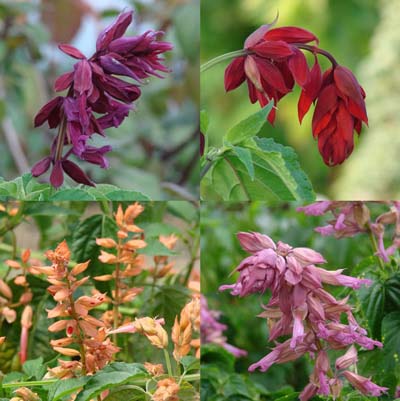 Very well grown healthy plants. The best mail order plants I have received from numerous growers. For the size of the plants they were priced appropriately.
Jerald Basham
The Salvia I ordered came in great shape, the size of the plants were large too. They are doing very well in new pots and I'll continue growing them in my green house for the winter. Love the rare salvias FBTS offers. Thank you.
Helena Hartje
Thank You for the Great Service and 5 Beautiful Cherry Chief Sage plants. All arrived safe and sound because of the Great detail of packing them! The Plants spent 4 days under Grow Lights because of the threat of hail and damaging winds in my part of Texas. Been in-ground now approx. 3 weeks and...
Patrick Abdo
Thank you, thank you, thank you! I love my Echium 'blue steeple'! I received the plants healthy and ready to transplant. I will definitely be a repeat customer...
Nancy Barsotti
I received my most recent shipment last week. I'm always amazed to see how fresh and fluffy the plants arrive. I always have excellent results with your plants. The quality is delightful. Thankyou for such good service.
ZoeAnna Hall
The plants arrived beautifully packed, in lovely condition, and I followed the very clear instructions for unpacking, getting them accustomed to the growing conditions here, hardening them off and planting them in my garden. They are doing beautifully and I love the complete descriptions of how...
Nancy Ann Page
Amistad is THE perfect salvia--just a wonderful size, and it blooms like crazy, even here in Iowa! Now, if only my ruby-throated hummies would find it. Buying them later in the season, they didn't get the prime pieces of real estate, but I'm sure the little hummingbirds will love it as much as...
Linda
Bought three plants and they are doing great. One salvia that was only in the ground two weeks is already in bloom. The other two plants are doing very well. They are rooting real good before it starts to really freeze in the next week. Plants arrived in excellent condition and I plan on buying...
Mr G
My plants arrived quickly and they were in excellent health. So far, they are doing well in my yard despite the unusually dry weather we've had on the Monterey Peninsula this winter. I will definitely order from fbts again!
S. Morrow
I'm in love with your plants and look forward to their arrival every year! They are always beautiful and healthy! Few people offer the selection that you have and I'm thankful for your website!
Jasmine
Submit a Testimonial
Read More