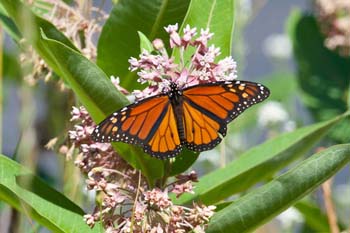 Milkweed is the homely common name for many pretty plants in the Asclepias genus. Butterflies, bees and beetles rely on their nectar, pollen and foliage as a food source. Monarch butterflies (Danaus plexippus) especially need milkweeds as host plants for their caterpillar babies.

Numbers of milkweed species vary, but the U.S. Forest Service cites more than 130 species as being native to North America from Mexico to Canada.

Three Tough Superstars
At Flowers by the Sea, we're serious about wildlife gardening, which is one reason why we grow a number of milkweed species considered to be among the best for supporting Monarch butterflies. They include:

All are full sun perennials, reaching no taller than 48 inches when in bloom with lots of tiny flowers in globe-like umbels that make it easy for butterflies to perch and take a drink.

Tolerant of both heat and cold, all grow well in U.S. Department of Agriculture Plant Hardiness Zones 4 to 9. Swamp Milkweed will even tolerate zone 3 winters. As to water needs, both A. eriocarpa and A. speciosa are drought-tolerant species whereas A. incarnata needs more water. This makes sense when you consider the amount of rainfall in their respective regions.

Which Kind of Milkweed to Grow
Here's a fun plant geek thing to do: Visit the U.S. Department of Agriculture Plants Database page for the Asclepias genus and click on the "Subordinate Taxa" tab to reach maps showing the native areas of more than 70 milkweeds. You'll find that Indian Milkweed is indigenous only to California whereas Showy Milkweed is native to much of the nation from the Great Lakes to the West Coast, including western Canada.

Except for Oregon and Montana, the West isn't home on the range, or anywhere, to Common Milkweed, which stretches from Saskatchewan south through the Midwest and Texas, then continues on to all of the East Coast except Florida.

If you choose to grow milkweeds in your garden, ones that are native to your region usually are the best choice for feeding native butterflies. For example, Indian Milkweed is an excellent choice if you live in the Monarch's western flyway from Mexico northward through California and the Pacific Northwest. 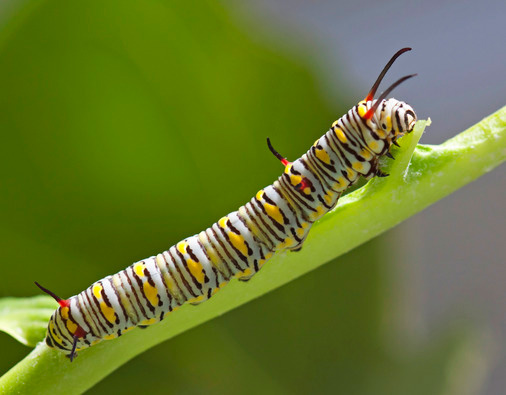 However, Indian Milkweed's chemicals aren't as protective for Monarchs traveling the eastern flyway, which includes Texas, the Midwest, the South and the East Coast.

Monarchs migrating through the Rocky Mountain West may be strays from either the western or eastern groups. Showy Milkweed and other mountain-states natives, such as Hall's Milkweed (S. Hallii), are good choices for serving Monarchs from both migratory routes. Hall's is a species that we hope to offer in the near future.

Intentionally growing milkweeds from seeds is a lengthy process to achieve vigorous plants, so quantities often are limited at FBTS. This may seem ironic considering that, given the right circumstances, milkweeds allowed to grow unrestrained can become a vigorous nuisance.

Uncontrolled, they may naturalize in parts of your yard where you don't want them. To manage this tendency, simply snip off the seedpods before they ripen and pop open.

If some of the seed escapes, dig up errant plants and place them where they are welcome. Then pat yourself on the back for helping Monarchs and other tiny wildlife.

Yes, some of its species are pesky in agricultural fields, but the reality is that without milkweeds there are no Monarchs, and without pollinators there is no agriculture. How many wildflowers can we afford to lose to pesticides?

A Bit of Naming History
Early native peoples of North America used milkweed fiber to make cord that they often wove into clothing. But many milkweeds were primarily important to tribes as ingredients in folk remedies.

Canada's first pharmacist, Louis Hébert, sent milkweed seeds home to France in the early 17th century, a time when Europe was deeply interested in the medical properties more than the ornamental qualities of colonial plants.

In his 1635 publication Canadensium plantarum aliarumque nondum editarum Historia (roughly "A History of Not Yet Published Canadian Plants"), French physician and botanist Jacques-Philippe Cornut identified two of the plants he grew from Hébert's seeds as being part of the dogbane genus (Apocynum) of the family Apocynaceae.

Although closely related to the dogbanes, the plants gained a family of their own, Asclepiadaceae. In 1753, Carl Linnaeus, the father of modern nomenclature, named the family and the plants' genus for Asklepios, the Greek god of medicine and healing.

One key difference between milkweeds and dogbanes, according to the Lady Bird Johnson Wildflower Center, is that although Monarch butterflies occasionally lay eggs on Dogbane (Apocynum cannabinum), "their offspring will not mature on it."

Milkweeds in Native American Medicine
Aside from their crucial role in supporting Monarchs and other pollinators, milkweeds have a deep history of use as Native American herbal remedies. According to the USDA Natural Resources Conservation Service (NRCS), a number of tribes used Common Milkweed to treat ailments ranging from backaches to warts. Other more dramatic applications included prevention or termination of pregnancy.

NRCS fact sheets about milkweeds note that to treat coughs and measles, some tribes drank tea made of Showy Milkweed rhizomes. Others inhaled the smoke of Indian Milkweed for asthma. Sap from more than one species was cooked into chewing gum.

Another common name for both A. incarnata and A. tuberosa is Pleurisy Root, because Native Americans and colonists created medicines from them to treat chest inflammation.

Modern research shows that milkweeds contain powerful glycosides (sugars), which make the heart contract disruptively. It's no surprise that NRCS warns readers -- in bright red type at the beginning of its factsheets -- that Asclepias species may be toxic if consumed.

How did Native Americans prepare milkweeds in order to consume them safely? We don't know. What we do know is that, although milkweeds are worthy of scientific investigation, DIY experimentation with their sap is dangerous.

We also know that the Asclepias genus is finally getting some respect.

Although the chemicals in milkweed sap can be dangerous for people and other mammals, these substances -- consumed only at the larval stage -- protect Monarchs and other butterflies throughout all stages of their lives.

Also, butterflies aren't the only kinds of insects that eat milkweeds and defend themselves against predators by doing so.

In the spring 2011 issue of Wings, a publication of The Xerxes Society for Conservation of Insects, ecologist Brianna Borders and conservationist Matthew Shepherd noted that many insects eat milkweed foliage or its nectar, including bees, beetles and species that are "natural predators of crop and garden pests."

Agricultural aversion to milkweeds arose, in part, due to the plants' chemicals making horses and livestock ill. Yet Borders and Shepherd point out that animals typically dislike the bitter flavor of milkweed and only eat it if other forage is insufficient.

Also, milkweeds were considered the bane of row cropping until the advent of bioengineered crops resistant to glyphosate herbicides that kill weeds, including Asclepias species.

For example, when allowed to proliferate in agricultural fields, milkweed causes difficulties such as emerging earlier and growing faster than seeded crops. 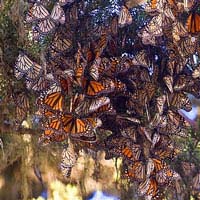 Yet the use of glyphosates has led to major shortages of milkweed, and this has contributed to the decline of Monarchs and other Lepidoptera.

In her 2015 report Milkweed and Monarch Concerns, garden writer Pat Sutton notes that the population of Monarch's overwintering in Mexico last December numbered 57 million. However, she says that figure is "80% below the long-term average of 300 million Monarchs."

What can we do in our home gardens to help turn around this dire situation? The answer is to provide habitat for Monarchs by planting milkweeds and avoiding use of pesticides and herbicides. Every plant counts.

Some Commercial and Governmental Solutions
Milkweed is made for sweet dreams. Historically, many North Americans used the silky seed threads of milkweed pods to stuff pillows and mattresses. This includes Native Americans who used it to soften baby bedding. (An interesting aside: During World War II when kapok wasn't available for pilots' flak jackets, American children gathered milkweed pods to provide substitute filler.)

Nowadays, milkweed silk is combined with goose down as "hypodown" in comforters designed to minimize allergic response to bedding. You may wonder where all the fluff is coming from.

Milkweed is becoming what Farm Show Magazine calls "a serious crop." In addition to bedding, the magazine cites commercial uses for milkweed silk and sap such as oil absorption, insulation, ceiling tiles and moisturizers rich in vitamin E.

What was once primarily considered a weed is now the poster plant of nationwide alertness to a larger movement aimed at protecting all pollinators.

Farm Journal's AgWeb reports that federal efforts to increase the supply of milkweed include seeding government lands managed by the U.S. Fish and Wildlife Service.

According to Iowa State, the USDA Farm Service Agency is encouraging CRP participants to plant part of their set-aside lands with milkweed.

Feeding Butterflies and Curiosity
Monarchs rule, butterflies matter and customers count at Flowers by the Sea Farm and Online Plant Nursery. We want to do all that we can to help you help Monarchs and other pollinators. We work hard to grow quality plants, provide excellent shipping and give you in-depth information that is easy to access at our website.

For example, if you scan our product menu atop the FBTS homepage, you'll find a link to many Butterfly Plants. If you are curious about any of our plants or have questions about wildlife gardening, please call or email us. We're here to listen and help.

Butterflies and Neonics
It's dangerous to grow milkweeds near plants, such as rose bushes, that have been treated with nicotine-derived neonicotinoid (neonics) pesticides. Recent research shows that although untreated with neonics,  milkweeds may absorb them from other treated plants close by. In February, Minnesota Public Radio reported that neonics don't kill Monarch butterflies, but may cause their larvae to die.

Flowers by the Sea relies on biocontrols, such as beneficial predatory insects, to control pests. Except in extreme circumstances calling for the mildest pesticides possible, such as insecticidal soap sprays, we avoid chemical interventions. We have never used neonics and never will. We also don't use glyphosate herbicides that eradicate milkweeds.

If you have questions about our biocontrol practices, please contact us for more information. 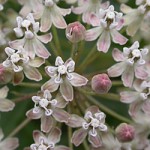