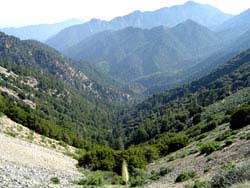 Small acts of kindness can begin in the garden after gaining new insights into the wildlife residing around you, such as the 170 species of butterflies that call California home for at least part of the year.

Let’s say you live in or near the foothills of Santa Barbara or Los Angeles where shrubby coastal sage and chaparral plants thrive. Maybe you think these native plants are nuisances to remove before planting your butterfly garden. Think twice.

Just hold it a minute or a day or a week if you are thinking about clearing any of these plants from your yard. They are home to some of the butterflies you want to attract.

In particular, we want to introduce you to the Hermes Copper butterfly, which is so tiny that its wingspan is no broader than the first joint of your thumb. If you plant the groundcover Spiny Redberry among your Salvias along with some of the other chaparral plants mentioned, you may be doing a great kindness. The Hermes Copper won’t lay its eggs on any plant other than Spiny Redberry, much of which has disappeared due to wildfires.

If you have no coastal sage or chaparral species in your yard, consider creating a grouping. As you choose plants, remember that butterflies are attracted to areas where they can find appropriate host plants for their caterpillar babies as well as nectar-rich species.

What Is Southern California?
Southern California has many micro-climates, which can make it puzzling trying to find a good mix of nectar and caterpillar food plants for your area. Fortunately, the North American Butterfly Association, better known as NABA, posts a number of informational websites for the region.

This leads to the logical question of what we mean by “the region.” No, it’s not just Hollywood or a state of mind. But good try. Also, let’s cut the formality and call it SoCal.

Back in the 1980s, an advertising campaign deftly divided the state into numerous geographical regions, which it referred to as "the Californias." This caused people to begin thinking about the coastline being split into northern, central and southern regions with the southern area beginning roughly at Santa Barbara.

For purposes of this article, we’ll consider the favorite plants of a broad range of butterflies from Santa Barbara down to greater Los Angeles. But first, here is a quick look at the entire state’s population of butterflies.

A Butterfly Celebrity and Other Species
Lots of southern butterfly websites mention the Gulf Fritillary, a Longwing (Heliconae) member of SoCal’s largest butterfly family, the Brushfoots (Nymphalidae). All the Latin names can get a bit boggling, but they are helpful in guiding decisions about what to plant to attract particular butterflies.

For example, Gulf Fritillaries love sipping nectar from the wide-open blossoms of Passion Vine (Passiflora incarnata), Impatiens (Impatiens Walleriana) and Salvias that have flowers with short throats, such as Cleveland Sage (S. clevelandii) and its hybrids.

After viewing a Gulf Fritillary, it is easy to see why some people talk about them as if they were movie stars. They are butterfly beauties. The tops of their wings are a rusty red-orange with fancy black markings. The undersides have a splash of rust and lots of elongated white dots surrounded by black.

Other California butterfly families -- all of which have species in SoCal except for the Metalmarks -- include Gossamer Wings (Lycaenidae), Skippers (Hesperidae) which love flowering grasses, Swallowtails (Papilionidae) and the Whites and bright yellow Sulphurs (Pieridae). One lone species of Metalmark (Riodinidae) called the Mormon Metalmark (Apodemia mormo) makes appearances in Central California.

For detailed descriptions and photos of the many species in these families, visit Art Shapiro’s Butterfly Site at the University of California, Davis, website. We also included some thumbnail descriptions of the families in our article about Texas butterfly gardening.

SoCal Lepidoptera Food Favorites
Some butterfly plants that grow well in one part of Los Angeles County can be a poor choice for another part of the metro region. The butterflies that hang out in Malibu or further north in Santa Barbara enjoy the nectar of various kinds of Pitcher Sage (Salvia spathacea) and California Purple Sage (S. leucophylla). However, NABA gardeners further south along what is called the LA Basin say that neither species does well in their foggy microclimate.

Here are four SoCal areas for which NABA provides detailed lists of nectar plants for adult butterflies and host plants for foliage-munching caterpillars:

Finding plants that work well both as nectar providers and caterpillar hosts is economical in a butterfly garden. Mexican Milkweed or Golden Bloodflower (Asclepias curassavica) is cited as a good nectar and caterpillar food plant in all four locales. Some other plants that commonly do double duty in SoCal butterfly gardens are California Lilac (Ceanothus spp.) Hibiscus (Hibiscus rosa-sinensis), Impatiens (Impatiens walleriana), Passionvine (Passaflora incarnata) and Sticky Monkeyflower (Mimulus aurantiacus).

You don’t find Sages in that list because it their nectar appeals to butterflies, but they aren't a host plant for caterpillars. Consequently, SoCal Salvia lovers beware: If you want butterflies to stay awhile in your garden, include plants they consider appropriate for their eggs. They are just trying to be good parents. To meet this need, we grow a number of milkweeds (Asclepias) among our many butterfly plants at FBTS. Questions? Please give us a buzz.