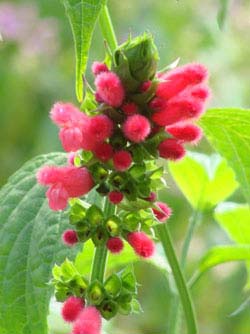 A bright, cherry-licorice red, the large, fuzzy blossoms of Salvia oxyphora would make anyone stop and pay attention. Commonly known as Fuzzy Bolivian Sage or Bolivian Spearhead Sage, S. oxyphora has equally unusual foliage that fools the eye. At a distance, the plant’s lance-shaped leaves appear to be a smooth, glossy green. However, they are covered with tiny clear-to-white hairs. They’re also large -- growing up to 5 inches long and 2 inches wide at maturity -- and taper to long, sharp points.

It’s the extreme sharpness, or drip tips, of the leaves that likely give this plant its Latin appellation “oxyphora.” Roughly translated, “phora” means “bearing” and “oxy” means “sharpness.”

Maybe it was the plant’s combination of surprising color, texture and leaf shape that led to its first collection by a botanist.

Early Plant Exploration in Bolivia
On a southern hemisphere autumn day in April 1892, S. oxyphora grabbed the attention of 19th century plant explorer Otto Kuntze of Germany as he searched South America for species not yet introduced to horticulture.

Kuntze began work life as a business clerk and spent all his free time studying Berlin’s flora. At 25, he established a factory to refine volatile plant oils. His business was so successful that he was able to retire five years later and devote the rest of his life to botanical studies and exploration.

Writing in the April 2012 issue of Curtis’s Botanical Magazine, British botanists John Wood and Ray Harley note that Kuntze traveled by boat to South America and then by train and horseback from Argentina to Brazil. Along the way, Kuntze encountered S. oxyphora near the city of Cochabamba while venturing through the ferny jungle lands of Central Bolivia’s Los Yungas forest in the Andes Mountains.

Striving for Survival
Fuzzy Bolivian Sage is endemic to Bolivia, which means it occurs naturally in the wild nowhere else in the world. According to Wood and Harley, it isn’t prolific because it is generally unsuccessful at producing viable seeds.

Yet it grows in widely distributed patches on the lower altitude edges of Andean forests. Wood and Harley theorize that it may have been more abundant in the past. They speculate that “the hummingbird that used to pollinate it is now rare or extinct” and suggest monitoring of the “vulnerable” wild stands.

Luckily, it is easy to propagate the shrubby S. oxyphora from cuttings. This may be why Wood and Harley saw it cultivated in Bolivian home gardens although they never found it in the country’s commercial nurseries.

If a traveler to Bolivia does see S. oxyphora in the wild, this rhizomatous, mat-forming perennial most likely will be in open, disturbed ground -- the kind that has been farmed, logged or otherwise altered – at altitudes from about 1,000 to 6,500 feet. This indicates a certain kind of toughness although the species doesn't tolerate frost.


Also, unless visiting Bolivia during the southern hemisphere’s winter, our imaginary traveler has a good chance of seeing the plant in flower, because bloom time for S. oxyphora stretches from spring through fall.

Growing Fuzzy Bolivian Sage and the Warm Fuzzies
In America, S. oxyphora grows well in USDA Zones 7 to 9, but winter mulching is a good idea in the coldest part of this range. It needs full sun to partial shade and loamy, fertile, well-drained soil to reach about 36 to 48 inches tall and 36 inches wide - more in perfect growing conditions.

Although Fuzzy Bolivian Sage starts growing slowly, it takes off when weather gets warmer. Pinching its tips to encourage branching also discourages brittle growth that can break stems in heavy wind. Select a setting offering protection from wind is also a good idea.

Regular watering is sufficient. However, this sage loves moisture. It is a good solution for partially shady, moist areas of the yard. It is attractive in perennial borders, patio containers, cut flower beds and woodland gardens. For close-up views, use it to edge a walkway.

Be aware that you might get a case of the warm fuzzies when you plant Fuzzy Bolivian Sage. Wherever you plant it, hummingbirds are likely to find it. They love red and the rich nectar inside the tubular flowers that are just right for their beaks. Providing wildlife habitat and protecting vulnerable species is gratifying. Don’t hesitate to write or call us if you have any questions; it’s gratifying to be helpful.

I recently received my very first order from Flowers by the Sea Nursery in Northern California. It won't be my last. I had researched a lot online about Salivas and although many of the more exciting varieties seemed suitable for my climate -- I knew no nursery that grew them -- meaning I...
Dan Tyson
Ordered three pink mexican bush sage. Had to wait due to my late order but they arrived yesterday. They were much bigger than I expected. They were still moist, no broken foliage and lovely green leaves. I was very happy since I cannot get these anywhere here.
Patrice Gregory
I purchased an order of 30 salvias, milkweeds and agastache from FBTS. The plants were packaged well and arrived large and healthy, with the exception of two plants whose branches had snapped during shipping. The plants that were not damaged in shipping were surprisingly large, with the largest...
Saumitra Kelkar
FBTS offers and delivers fantastic products. I purchase high-end plants from plugs to full grown, specimen tree cultivars. FBTS has been a very welcome addition to my Maryland business. They have filled an important niche in my plant material supply chain, and I cannot recommend them enough....
Eric Wittman
I love the plants I have ordered! They are so healthy and very strong stemmed. They are doing very well in my garden. Highly recommend ordering from this nursery.
Debbie Platt
Plants arrived in good condition Dug hole and planted salvias. Weeks later had new flowers on them Seem to be thriving. Will be anxious to see how they look next year Will definitely order more plants.
Timothy blosser
I placed my order of 6 Salvia Buchananii with Flowers by the Sea in February 2017 for arrival in early to mid March. During the first weeks of March we here in Coastal South Carolina were warned of hard freeze potential. Flowers by the Sea contacted me via telephone to discuss the shipping of...
Janis Proctor

Wendy's Wish is very happy here in Central Florida. It has flourished. It has micro irrigation and morning sun. High heat 90's plus, not a problem.

Gloria Brooke
Was more than satisfied with my well packed and large plants delivered on time. Healthy and in bud and in flower.Pleasure dealing with you.
Rich

bought 12 salvia plants, mostly salvia leucantha. was delightfully surprised at the size and quality of my plants. if these do well in the southern california desert sun, i'll be back for more...lots more.