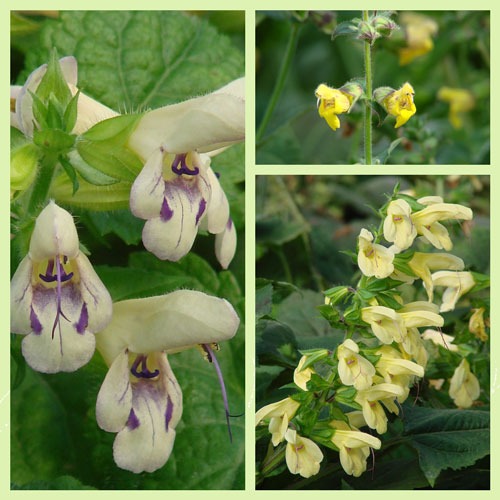 In Imperial China, it symbolized growth and was worn only by emperors. In Japan, it has conveyed a number of meanings, including courage. Yellow is a color with many interpretations.

Among Salvias, one might say yellow represents rarity because, overall, it’s an uncommon flower color for sages. But China and Japan are home to a number of yellow-flowered species, especially shade-loving sages such as Mount Emei Sage (Salvia omeiana) and two Japanese native plants — Japanese Yellow Sage or Shinano-akigiri (Salvia koyamae) and our Flowers by the Sea variety of Makino (Salvia glabrescens 'Elk Yellow and Purple').

Why So Few Yellows?

Although not quantified, yellow seems more prevalent among Eastern rather than Western Hemisphere sages. We don’t know why this is, but a sensible guess might be that it’s due to nature helping plants adapt to available pollinators.

Hummingbirds, which particularly love red, only live in the Western Hemisphere where they are major pollinators. Asia does have nectar-drinking sunbirds, but their sharp beaks are much shorter than those of hummingbirds. Consequently, they puncture the nectar-filled bases of flowers and obtain a drink without gathering pollen.

Bees, on the other hand, live worldwide and are mightily attracted to yellow flowers. And, in general, they can’t see red.

In recent decades, research has shown that the colors and shapes of flowers have evolved to appeal to local pollinators. So maybe the greater abundance of yellow SaIvias in Asia has something to do with nature adjusting its wares for local honeybees, wild bees, and other insect pollinators.

Salvia glabrescens, S. koyamae, and S. omeiana have much in common other than their flower color. All three are woodland plants, which share being:

Some key differences include height and season when in bloom. For example, S. omeiana rises up to 72 inches tall when flowering in summer. In contrast, S. glabrescens and S. koyamae remain short when blooming in fall.

S. glabrescens and S. koyamae grow well in containers or as groundcovers that spread gradually, forming loose, rounded clumps of large, arrow-shaped leaves. S. omeiana doesn’t fit either of those roles but adds vertical drama to a garden with its cloud of small flowers that rise up from elongated, heart-shaped foliage.

What’s in a Name?

Salvia omeiana. Although information online about this easy-to-grow, long blooming sage is scarce, there are even fewer details available about the German botanist, Elfriede Peter-Stibal (1905-?), who published its botanical name in 1934. The appellation she selected, omeiana, translates to “of Emei.”

Mount Emei, or Emei Shan (shan means mountain), is in Sichuan Province on the eastern border of Tibet and is one of China’s four sacred Buddhist mountains. It was home to China’s first Buddhist temple, which was built in the 1st century A.D.

UNESCO named the Mount Emei Scenic Area a World Heritage Site in 1996 due to its history, biodiversity, and cultural treasures. The massif’s diverse vegetation ranges from subtropical to alpine. It’s also home to the Leshan Giant Buddha, which is carved into the mountain. At roughly 233 feet tall and 33 feet wide, it’s the world’s largest representation of the Indian philosopher, who lived sometime between the 5th and 4th centuries B.C.

Makino was orphaned when young and was frail during his youth. He found solace in nature and trained himself as a naturalist and botanical illustrator before receiving formal education. He persevered through a lifetime of great political upheaval.

Often called the father of Japanese botany, Makino was one of the first botanists in his nation to adopt the Linnean system of plant classification in which each plant has a unique, two-part botanical name of genus and species.

When exploring our Japanese sages, you’ll find that we grow three varieties of S. glabrescens and that each includes “Makino” in its common name. The species is one of thousands of Japanese plants that Makino classified. A botanical garden in Kochi Prefecture (similar to a state) is named for the botanist as is Tokyo’s Tomitaro Makino Memorial Garden and Museum.

Every plant has a story. Learning about that tale takes you on a virtual journey destined to arrive in your own yard when you grow the plant. It’s a fun way to travel.

All of us at Flowers by the Sea wish you great adventures in your garden. Along the way, you may have questions or stories of your own to share. Please contact us; we’re glad to provide answers and to listen. 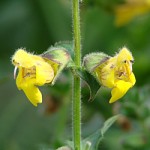