Your cart is empty.
You are here    Flowers by the Sea / / Drought-Resistant Beauties: A Guide to the Salvia greggii and S. microphylla...

Drought-Resistant Beauties: A Guide to the Salvia greggii and S. microphylla Group 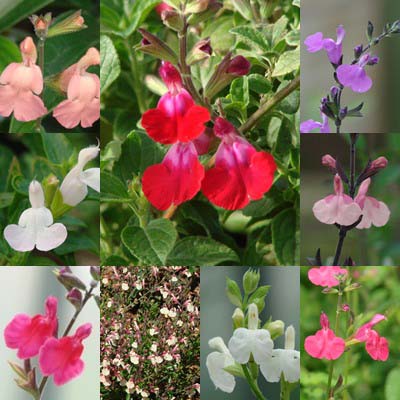 It can be a long journey from discovery to popularity for a plant. Currently, the most widely sought group of Salvias is the one encompassing Salvia greggii and Salvia microphylla, which are commonly known as Autumn Sage and Mountain Sage. They caught the eye of naturalists traveling the American Southwest and Mexico's Sierra Madre mountains in the mid-to-late 1800s. However, they didn't take root in garden catalogs for well over 100 years.

These woody perennials are native to high elevations and warm, dry, rocky lands. Their homelands in the Sierra Madres arc from the Mexican state of Chihuahua south to the the state of San Luis Potosi. While Autumn Sage is also native to parts of Texas, such as the El Paso area, Mountain Sage's homelands include Southern Arizona.

Despite their origins in semi-arid lands, S. greggii and S. microphylla now are widely cultivated across the United States, especially along the West and East coasts, and overseas in countries such as Australia and Britain. Their adaptability to different climates is part of their appeal.

Many Autumn and Mountain sages are hardy to 10° F or less. In cold-winter areas, dieback to ground level may occur, but these sages usually burst back with new, vigorous growth in spring.

The drought tolerance of these species and their hybrids are appealing along with their abundant flowers that blossom vividly for months in a wide palate of colors. With their long skinny beaks, hummingbirds are particularly drawn to the nectar of the tubular, double-lipped flowers.

Short height -- neither species grows more than about 3 feet high -- and heady fragrance make Autumn and Mountain sages a favorite for lining walkways or enhancing building entries. Brush next to one and you can smell why they are intoxicating to so many gardeners.

Due to sharing native lands and many characteristics, S. greggii and S. microphylla are often mistaken for each other. To further this confusion, Salvias, in general, are well known for cross-pollinating within their genus. That is why there are some 900 species.

S. microphylla is particularly likely to cross with other species of Salvia, especially S. greggii. While this may bother some gardeners, it can lead to beautiful offspring that become popular cultivars on their own.

Despite being called Autumn Sage, S. greggii generally begins flowering in early summer and then continues blooming abundantly through autumn. In extremely hot climates, it appreciates occasional shade. However, S. greggii is most accustomed to dry, open locations in full sun.

Mountain Sage is also commonly called Littleleaf, Baby or Graham's sage, but is best known as S. microphylla. It tolerates more shade, moisture and growing conditions than S. greggii, thriving in containers and meadows as well as rocky lands.

Similar to S. greggii, S. microphylla is ideal for sunny borders. However, in hot climates, it doesn't mind being a bit tucked away from sun when temperatures peak. In the wild, it can sometimes be found growing along lightly shaded road banks. Due to being a little less comfortable with intense sun, S. microphylla mostly flowers in spring and autumn.

Mountain Sage varieties are a bit larger than S. greggii cultivars, such as S. microphylla 'Orange Door', or Big Orange Mountain Sage, which grows up to 48 inches tall. For example, a number of Autumn Sage cultivars top out at 36 inches, but some are quite a bit shorter, such as the 24-inch Playa Rosa cultivar, which is known for small leaves as well as compact growth.

It's easiest to view the differences between the two species in side-by-side plantings. Similar to the foliage of most S. greggii varieties, the deep green, tiny, spear-shaped leaves of Elk Pomegranate Autumn Sage (S. greggii 'Elk Pomegranate') -- which has raspberry colored flowers -- are smooth overall including their edges. It forms a lively contrast with the deep red-orange blossoms of Big Orange Mountain Sage, which has larger, veined leaves with serrated edges.

Puzzling out the parentage of the various S. greggii and S. microphylla hybrids relies, in part, on these differences as well as the characteristics of other woody perennial Salvias that have crossed with either of the species.

The western and eastern Sierra Madre Mountains begin converging in the central Mexican states of Coahuila, San Luis Potosi and Nuevo Leon. This is where the territories of S. greggii and S. microphylla  come together, resulting in the lovely pastel bicolors of the species S. x jamensis, which shares characteristics with both parents. It is named for the village of Jame in Coahuila.

For example, S. x 'Elk Twilight's Rosy Glow' has bicolor flowers of rosy pink and creamy yellow. Similar to some of its shorter S. greggii relatives, it only grows to 24 inches tall. Elk Twilight's Rosy Glow Mountain Sage also has tiny, smooth foliage. However, like its S. microphylla relatives, it can handle humidity and cooler temperatures. It thrives along the Northern California coast.

Unwinding the genetic histories of many Salvia species can be daunting. When definite parentage is unknown, botanists consider clues too numerous to detail here. That's a story for another day.

However, at Flowers by the Sea, we include some glorious and carefully identified close relatives in our Autumn and Mountain Sage Group. Coahuila Sage (S. coahuilensis) is an excellent example. It contributes the rare color of deep beet-purple blossoms to what appears to be the Autumn Sage family. The genius of the Salvia genus is its creation of such serendipitous surprises. We're thankful for the work of naturalists, both past and present, and we're glad to help spread their beautiful discoveries. If you have questions about these mint family (Laminaceae) sages or any other plants in our catalog, please contact us.

This spring I ordered from 5 different plant sites. FBTS was by far the best. The plants were larger and better branched. Your packaging was superb! Each plant was still moist around its roots and the dirt was held in each pot so none was shaken loose. Your service is the best! Thanks.
Linda DeRoze
It was a pleasure shopping here at Flowers by the Sea. I received my Salvia plants timely and the quality has been the best i have received from any online delivery. I will continue to shop here comftrably
Art
My last plants were broken on arrival.I called and was told to wait a month.Yup! They are dead as doornails.
patricia small
We ordered 15 plants. All arrived in excellent condition. If our local nurseries offered these plants, which they don't, 14 of the 15 would have already been in 2-gallon or larger containers and priced considerably higher. These are by far the best-grown, healthiest, and largest Salvias...
Louis Fry

This was my first order with Flowers By The Sea. I purchased two of the Salvia vitiifolia plants. Even though it took a while for the plants to be ready for shipment, it was well worth the wait. My first move was to transplant them into larger pots until I can make up my mind where I want them...

Roy Belletto
I received my second order of great looking plants - they were sent on Monday and didn't arrive until Friday - only slightly limp; I said \"great looking\" because they were thick, bushy and very healthy looking.
Doris Wilkinson
Great company. Large variety of salvias!
Susanna Askins
I'm in love with your plants and look forward to their arrival every year! They are always beautiful and healthy! Few people offer the selection that you have and I'm thankful for your website!
Jasmine
I am a first time customer and had reviewed this site's selection several times before buying. I hesitated because I thought the plants were a little pricy and shipping costs were higher than I was expecting. I found the money was well spent. The plants arrived quickly and were absolutely...
Kristine A Smith
I ordered Wendy's Wish salvia and Elk white ice salvia. I was thrilled to find the Wendy's Wish. It is one of my favorite salvias. I had never had a truly white salvia and it is stunning. The plants were in great shape after traveling from California all the way to Georgia. They are thriving in...
Dianne Davis
Submit a Testimonial
Read More