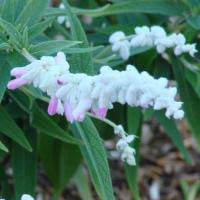 Very satisfying service. Plants arrived as promised, though one was damaged. I notified fbts and received a refund. Plants are doing well, as they were healthy and we followed the complete and understandable instructions for preparation and planting. Many thanks. I have recommended this company...
Carol Sherrill
Ordered a dozen assorted salvia, all arrived in great shape, plus the website has plenty if guidNce for where to site the plants and how to care for. Great company's, gorgeous plants, great packing job. So excited for these new additions to my garden.
Judy Potwora
I always await my Flowers by the Sea order like a child awaiting Christmas! Even though I know the plants I ordered and I know every plant will be perfect, it is exciting just to open the box and experience the love and care that goes into every shipment. Then to await the show in my garden!...
Nancy L Newfield
Never have gotten a delivery so quickly of mail-order plants and what's more, the plants were superior in quality to anything I've seen before. We have great nurseries in Berkeley and nearby but I must say, these were spectacular!
TG
This is the third year I have ordered plants from FBTS. All plants have arrived healthy with most blooming plants in bud or bloom. Plants are packed with great care and after a couple days to recover from shipment are ready to be planted. I've gardened for over 50 years and FBTS is without any...
Jan Stedke
Plants arrived as described and in excellent condition! Very high quality material and the best selection of Salvia anywhere.
GAIL SHAFER
Purchased plants as part of \"grew too much\" sale; plants arrived in good condition, and are adjusting well to the new home.
Linus
This was my first order with Flowers By The Sea. I purchased two of the Salvia vitiifolia plants. Even though it took a while for the plants to be ready for shipment, it was well worth the wait. My first move was to transplant them into larger pots until I can make up my mind where I want them in...
Roy Belletto
I have ordered plants from FBTS for the last 4 years, 17 plants in spring 2014. They are the most impressive plants in health and size that I have received from any mail order company. These are not little cuttings, but rather large bushy plants, typically 8-10 or more inches tall, full of buds...
Leslie MacGregor Levine

bought 12 salvia plants, mostly salvia leucantha. was delightfully surprised at the size and quality of my plants. if these do well in the southern california desert sun, i'll be back for more...lots more.