How to Defend Homes Against Wildfires & Firescape with Salvias 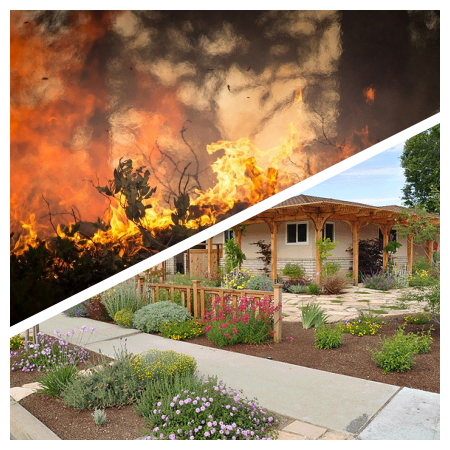 Home improvement, including landscaping, involves lots of decisions. This is especially true when modifying your property to protect against wildfires. Flammability is usually the last thought on a gardener's mind when planning what flowers, shrubs, and trees to purchase. But if you live in wildfire country and are a Salvia lover, you may have noticed that some lists of fire-resistant plants include Salvias without identifying specific types. This can be confusing, because there are more than 1,000 species of which dozens are commonly sold commercially.

Before going further, we need to say there is no such thing as a fireproof plant. Resistant, yes; fireproof, no.

At Flowers by the Sea Farm and Online Nursery, we specialize in growing a wide variety of Salvias and companion plants for customers nationwide. We know what kinds of sages grow well in different regions of our nation. Yet just because a sage is lovely and resilient in one area doesn’t mean that it thrives everywhere.

We live in a wildfire region but don’t specialize in firescaping — a term used to describe landscaping practices decreasing your home’s vulnerability to wildfires. However, we’re glad to share what we have learned from living in one of America’s major wildfire states and from preparedness organizations.

Ready for Wildfire is an education-focused organization that is part of CalFire (the California Department of Forestry and Fire Protection). Ready for Wildfire defines firescaping as the creation of defensible space. It’s the  process of designing yard layout, hardscaping, and plant choices to resist flames. In contrast, the organization refers to modification of structures — including house, fence, and deck — as hardening your home. Designing defensible space and hardening your home work together to minimize damage.

In addition to linking you to wildfire preparedness organizations and fire-resistant plant lists in this article, FBTS has gathered tips about hardening your home and developing a defensible yard. Also, please see our sidebar below, “Wildfire Country Coast to Coast,” to learn where wildfires occur. They aren’t limited to the West or to rural areas.

Ready for Wildfire offers many tips for hardening a house, like switching to fireproof siding and roofing (composition shingles, metal, and clay tiles), and retrofitting with double-paned windows. But it also includes many low-cost suggestions, such as:

Regarding the last item in that list, clearing almost all plantings within five feet of your home’s foundation is the first step in creating defensible space. Some organizations, such as Idaho Firewise, Inc, state that low-growing succulents, such as sedums and sempervivums (hens and chicks), are okay foundation plantings due to their fleshy, water-filled leaves. But keep in mind that any plants immediately next to your house need to be watered regularly. Also, consider switching to gravel mulch throughout your yard.

Preparedness plans recommend creating two to three landscaping zones around a house with the least flammable plants being in Zone 1. Depending on the organization making the recommendations, Zone 1 may be described as stretching from the foundation to 5 feet away (Idaho Firewise, Inc.), 10 feet away (Washington State University Extension) or 30 feet away (Ready for Wildfire).

The zoning can get a bit confusing, because not every fire preparedness organization sets the same perimeters. For example:

But the key ideas of all these plans are to (1) grow only the least flammable plants with high moisture foliage near structures and (2) grow the most flammable plants, such as fir trees, at the furthest edge of a property's perimeter.

If you want to retain a tree or two within 30 feet of your house, choose a hardwood and keep its branches well-trimmed so they don’t overhang the roof. According to Ready for Wildfire, the lowest branches of trees throughout the yard should be pruned to at least 6 feet above ground.

Also, trees and shrubs should be well spaced. Ready for Wildfire recommends spacing trees 10 feet apart on flat ground and 20 on slopes, because fire spreads rapidly down inclines. For shrubs, maintain a distance of two times a shrub’s width between the plant and its neighbor on flat ground. Double that distance on a slope.  Plus, don’t grow shrubs beneath trees where they can become ladders helping fire climb up upward.

Throughout your yard, it’s crucial to remove dry or dead vegetation, including that carpet of conifer needles underfoot. If possible, choose shrubs and perennials that don’t produce an abundance of dry, fallen leaves.

One last thought here: Strategically adding hardscaping elements — such as gravel paths, dry riverbeds, and stone retaining walls — can slow spread of fire in your landscape.

Salvias and Companion Plants for Firescaping

As already mentioned, a number of lists for fire-resistant plants suggest Salvias, in general. For example, the University of Washington Extension’s plant list identifies all Salvias as being acceptable choices within 10 feet of a house.

However, to play it even safer, we suggest a minimum distance of 30 feet, especially for types that have strongly aromatic foliage. The fragrance is from potentially flammable resins, such as the ones that make the Old-World native Kitchen Sage (Salvia officinalis) such a favorite holiday herb. A number of lists cite S. officinalis as a firescaping plant.

Most of the specific Salvias mentioned more than once in fire-resistant plant lists are California coastal natives that don’t adapt well inland or out of state. But they’re good choices in wildfire areas from the northern to southern parts of the state when planted in conditions similar to those of their semi-arid homelands. These plants include:

Yet some fire-resistant California sages are adaptable inland within the state, such as Cleveland Sage (Salvia clevelandii ‘Winnifred Gilman’ is one example). Another is Mexican Bush Sage (for example, Salvia leucantha ‘Greenwood’ ), which is the only native coastal species adaptable to the heat and humidity of the San Joaquin Valley.

Fire-resistant plant lists also mention two adaptable Mojave Desert natives — Giant Purple Desert Sage (Salvia pachyphylla ‘Blue Flame’ is one variety) and Dorr’s Sage (Salvia dorrii), both of which have lush lavender floral spikes. S. pachyphylla has easily jumped state to places like Colorado and New Mexico where its slightly fleshy leaves are evergreen even during snowy winters. Equally pretty, S. dorrii is native to mountainous areas in a number of western states from Arizona to Washington. However, it isn't always easy to grow in home gardens.

Plenty of the flowers in the fire-resistant lists below are good companion plants for Salvias, including two drought-resistant species — Beardtongues (Penstemon PIKES PEAK PURPLE® is one of our favorites) and California fuchsias (like Zauschneria californica ‘Everett’s Choice’).

Here are some lists of plants for firescaping suggested by organizations throughout the nation.

Websites to visit for more information about protecting property against wildfire include:

Do you have success stories to share about Salvias and companion plants that have survived fire? We’d love to hear from you. Please contact us by email with your information. Questions about any of our plants are also welcome.

For example, the Insurance Information Institute annually analyzes U.S. wildfire statistics from many angles. One of its standard charts compares the top ten states for “high to extreme” risk based on “estimated number of properties at risk.” In 2019, the Institute identified California as the top hot spot with Texas placing second. Arizona came in fourth following Colorado, and Oklahoma was seventh. The chart also considers percentage of properties at risk, and placed Montana first for a whopping 29 percent endangered.

Another chart displays the top ten states for annual number of wildfires. For 2019, it stated that North Carolina was third (3,872 fires) after California (8,194) and Texas (6,892). Georgia was fourth (3,158) and Florida sixth (2,121). Looking at states based on amount of land burned, the Institute placed Alaska first at nearly 2.5 million acres.

Wildfire has become more than a rural hazard as residential development has expanded next to or mixed into natural areas, such as brush lands and forests. These kinds of settings are known as wildland urban interface (WUI).

According to a study published in the March 27, 2018, journal of PNAS (Proceedings of the National Academy of Sciences of the United States of America), WUI residential development expanded greatly from 1990 to 2010. The study’s authors found that the number of new houses in the WUI grew by 41 percent from 30.8 to 43.4 million and that WUI land area increased from more than 361,000 to nearly 478,500 square miles.

As the study notes, the majority of WUI wildfires “are human caused.” Yet climate change is getting involved as well, because a cluster of unusual thunderstorms created lightning strikes igniting Northern California’s summer 2020 wildfires.

Lightning is a common element of wildfires nationwide, but human actions as simple as allowing trailer chains to drag along a dry roadway or burning trash outdoors can spark wildfires. Taking steps to protect your own property helps to limit wildfire spread.