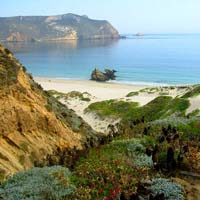 Plant nurseries and ecological restoration organizations nurture rare species of flora in much the same way that zoos keep endangered animals from going extinct. At Flowers by the Sea, we grow a number of native California sages, including threatened species such as the woody perennial shrubs Santa Rosa Island Sage (Salvia brandegeei) and its cousin Island Pitcher Sage (Lepechinia fragrans).

Coastal Sage Scrub Community
Within the Northern Channel Islands, the National Park Service divides each island’s native species into 15 “plant communities” and lists residents of each community for every island in the park. Our two “Celebrity Salvias,” as we have dubbed them, are part of the Coastal Sage Scrub community.

Due to the rarity of these sages, their differing tolerances for cold temperatures and varying needs for sun and moisture, they are unlikely to be found side-by-side or even on the same island.

Twenty-six miles off the coast of Santa Barbara, is Santa Rosa Island – the only native setting for Santa Rosa Sage aside from the Baja peninsula of Northern Mexico. On Santa Rosa Island, it lives among plants such as Coastal Sagebrush (Artemisia californica), Coastal Prickly Pear (Opuntia littoralis) and the non-native Black Sage (S. mellifera) that may have arrived on the island via domestic animals imported during the 1800s.

Endangered Species
When human inhabitants abandoned Santa Rosa Island, they also abandoned their pigs, which became feral or wild. The California Native Plant Society identifies Santa Rosa Sage, an evergreen, as being rare and endangered in California and Mexico. It notes that feral animals may have caused its decline.

Although Black Sage isn’t considered an invasive species, some plants that have accidentally found their way to the islands – such as Vinca major on Santa Cruz Island — have become aggressive intruders dominating habitat and forcing out native species.

It is unclear why Island Pitcher Sage, also called Fragrant Pitcher Sage, has become uncommon in the Northern Channel Islands. However, it also grows on Santa Catalina, which is one of the three southernmost islands in the Channel Islands, and on the mainland in Southern California’s Santa Monica and San Gabriel Mountains where it is threatened by urbanization and wildfire management.

FTBS hopes to help these lovely shrubs make a comeback. Both are hardy survivors despite their dwindling numbers. Here is some information to help you consider them for your home landscape.

Santa Rosa Island Sage is drought-tolerant, prefers full sun and can handle temperatures as low as 10 degrees Fahrenheit as long as the cold doesn’t persist for a long time. It is suitable for USDA plant hardiness zones 7-9. It can handle a bit of moisture, but likes dry, well-drained soil that isn’t heavily fertilized.

In winter and spring, Island Pitcher Sage produces lavender flowers with white-tinged lower lips. Its furry leaves are aromatic. You can expect it to reach up to 48 inches tall and 36 inches wide.

Backyard Coastal Sage Community
You may not live close to Southern California’s beaches, but you can have a bit of the Channel Islands in your backyard if growing conditions are right for either of these sages or for other coastal sage species such as Black Sage and Sacred White Sage (S. apiana).

If you would like a larger project, such as volunteering to help remove invasive species throughout the Channel Island chain, the organization to contact is Channel Islands Restoration. Either way, please contact us at FBTS for more information about sages right for your growing conditions.