True Blue Salvias You Can Rely On for Garden Serenity 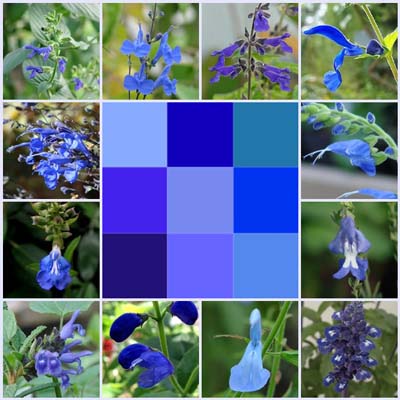 Forget all the mournful music telling you that blue is the color of sadness. In a Salvia garden filled with hot colors, true blue is a peacemaker -- a reliable harmonizer that commands peace in the garden.

As much as we love purple, it isn't the part of the blue range we're talking about here. Also, there is no single shade or tint of primary blue that can be labeled the only true blue.

So what does "true blue" mean? In general, when using the term culturally, it's interpreted as "reliable" and "loyal."

For football fans in Idaho, true blue calls to mind the Boise State University Broncos who wear royal blue, play on equally blue artificial turf and can be counted on to rank as a top-25 team. For rock music devotees, the term may recall the reliable dance pop of Madonna's 1986 album True Blue.

True Blue is also a name for goods ranging from hair care products to pet foods -- a title intended to convey confidence. But in the garden, true blue conveys serenity.

Chemistry of True Blue Flowers
True blue flowers get their pigmentation from a group of plant chemicals called anthocyanins, which can also cause blossoms to be red, pink or purple. Anthocyanins are part of the flavonoid family that also gives fruits and vegetables their colors.

Creating pigmentation is only one task of flavonoids. However, color is what this article is all about, and we only know enough chemistry to dogpaddle through the subject. So relax, because we aren't going to dive off a cliff into a complicated discussion of plant chemicals.

However, you might like to memorize this one for cocktail party conversation at your local botanic garden: Unlike the carotenoid pigments of yellow and orange flowers, true blue flowers contain metal molecules. The metals bind with anthocyanins to form metallocyanins, which interact with sunlight to reflect the color blue.

We grow a number of true blue sages at Flowers by the Sea, including species native to America, Mexico and South America. Here are some serene examples to consider.

True Blue Reliability from Dampness to Drought
In his essay A Gardener Comes to Terms with Blue at Pacific Horticulture, botanist Daniel Mount identifies true blue as encompassing many kinds of primary blue "diluted with white or fortified with black," but untouched by the red and yellow ranges.

Similar to many commentators on flower color, Mount says that true blues are rare among flowers. He points to the Salvia genus as containing several and includes Bog Sage (Salvia uliginosa) as one of his favorites. Mount says its flowers "break the spell of low-hanging gray clouds" during northwestern autumns.

Bog Sage is, perhaps one of the most reliably adaptable Salvias. It tolerates heat and is hardy to freezing winter temperatures in USDA Plant Hardiness Zone 6. Yet it has made repeat performances in colder Zone 5 settings, such as in the backyard of Denver Botanic Gardens botanist Panayoti Kelaidis who combines Bog Sage with sunflowers.

Full sun or partial shade, Bog Sage isn't picky. It's also flexible about soil types. Despite preferring good drainage similar to other sages, it thrives in damp soil as its common name implies. Also similar to most sages, this is a plant that doesn't appeal to deer.

A Gentian Giant from Mexico
When it comes to true blue, "gentian" is a word that often comes to mind. That's because some alpine flowers in the Gentiana genus (family Gentianaceae) have deep primary blue flowers.

Unlike star-shaped Gentianas, which grow wild in the Alps and the Rocky Mountains, Gentian Sage (S. patens) is native to Mexico and has double-lipped, tubular flowers that are shaped like parrot beaks. Flowers by the Sea grows several varieties from dwarf species to "giant" types that reach about 4 feet tall.

Yet hummingbirds regularly stop at many types of S. patens for their rich nectar and at many other true blue Salvias. Hummingbirds are particularly fond of Guanajuato Giant Gentian Sage (S. patens 'Guanajuato'), which is covered with 3-inch-long blossoms summer to fall.

British botanist James Compton found this variety in the Sierra de Guanajuato Mountains, which surround the colonial-era city of Guanajuato. In the wild, Compton's discovery was 6 feet tall.

Gentian Sages grow rapidly, so they are popular annuals as well as being perennial in USDA Plant Hardiness Zones 8 to 11. A number of these sages grow well in full sun, but all thrive in partial shade.

Although not as tall as some Big Leaf Sages, S. x 'Big Swing' -- a cross with Arrowleaf Sage (S. sagittata) -- wins our best-of-class designation for spectacular foliage as well as flowers. It has large, furry, arrow-shaped leaves.

Except for Big Swing, which is a Zone 8 magnet for butterflies, all our Big Leaf Sages are hardy to Zone 9 and popular with hummingbirds when blooming summer to fall.

South American Favorites
Aside from Big Leaf Sages, some of our favorite South American species range from cerulean to royal blue forms of true blue. All are water-loving and adaptable from full sun to partial shade. They include:

Blue Vine Sage is a climbing, or scandent, species rather than a true vine. It attracts a full range of pollinators whereas Corrugated Sage and Arrowleaf Sage are well loved by hummingbirds. Deer avoid all these tropical blues.

True Blue Friendly & Ready to Help
Cheerful is good in the garden --  like bright yellow flowers and blue Bog Sage. But laments in your landscape? We want to help you avoid those.

No matter what color of Salvia or companion plants you are seeking, we're glad to help you find what is best for your garden. Please email or call us at FBTS.  We're reliably friendly and helpful, which is part of the reason why we have so many true blue customers who return season after season.