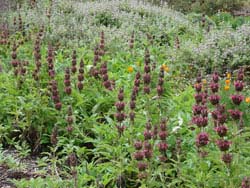 Quick Digs is a serial containing short posts focused on a central issue about Salvia gardening. The topic for the first series is Salvia groundcovers for weed control, and this is the first article.

Great groundcovers help conserve soil moisture and leave little room for weeds to grow. This is true of many colorful, fragrant sages (Salvia spp.) that spread freely and, in some cases, grow in mat-forming clumps. However, it also may be that the essential oils creating the pleasant aromas of many Salvias are helpful in suppressing weeds. Researchers refer to this apparent trait as the “Salvia phenomenon.”

Italian Study of Five Sages
A 2010 report about a study from Italy’s University of Salerno shows that the essential oils of five Salvia species are antigerminative, which means that they deter other seeds in their surrounding soil from germinating. To read the report, which appeared in the journal Molecules, click here.

The study focused on chemicals called terpines in the following species:

The researchers applied the essential oils of the plants to the seeds of two salad foods -- radish (Raphanus sativus) and garden cress (Lepidium sativum), then observed their germination and initial growth. They discovered that, except for Golden Sage, the oils of all of the Salvias deterred growth.

Salvia leucophylla Research
Salvia has long been a subject of studies on allelopathy, which is the ability of one plant to inhibit the growth of another. In the 1960s, researchers concluded that thickets of California Purple Sage (Salvia leucophylla) -- also known as California Gray Sage -- and White Sage (Salvia apiana) were surrounded by bare soil due to their terpenoids warding off other plants.

However, a 2012 report on a Japanese study about S. leucophylla, which appeared in the journal Current Bioactive Compounds, disputes the assertion that plant chemicals are solely responsible for this bare zone. For example, the Japanese report concluded that additional factors impact surrounding plant growth, including the grazing of small animals and seasonal changes. Also, the Japanese report said it's unclear exactly how other plants absorb the terpenoids of S. leucophylla.

Sages aren't a magic bullet for avoiding weeds in your landscape, but they offer an edge. FBTS is glad to provide the information and plants you need to create an attractive garden with little room for weeds. Please contact us if you have any questions.