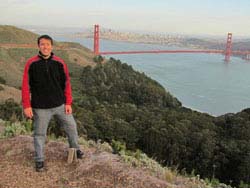 When adults work side by side with children in home gardens, they grow more than flowers and vegetables. They plant the love of gardening in young people.

Professor Rolando Uria, an agronomist who chairs garden studies at the University of Buenos Aires (UBA) School of Agriculture, was 7 years old when he first planted vegetables with his grandfather, Nicolás. It was this pleasant experience, Uria says, that first interested him in growing and understanding plants.

Uria is a champion of Argentina's native Salvias and likes to point out that many reflect the celestial color of the country's national flag. The truth of this comparison becomes apparent when viewing the educator's photos of Argentine native sages at his Salvias.com.ar website. According to Uria, lateritic soils in the tropics contain an abundance of iron and aluminum, which may create some of these shades of blue from pale dawn to purple dusk.

Spreading Botanic Friendship
Uria is well known among Salvia lovers for discovering the purple-flowered Salvia 'Amistad' -- one of the most popular sages to enter the commercial market in 2013. He found the puzzling sage at a plant show in Argentina. It appeared to be related to Anise-Leaf Sage (S. guaranitica), but Uria noticed significant differences over time, including its longer bloom season.

Dubbing the cultivar Amistad, which means friendship in Spanish, Uria shared cuttings for free among friends in the northern and southern hemispheres in order to encourage planting in test gardens and to gain scientific naming -- an expensive process. For more information about the history and traits of this impressive sage, please read New at FBTS: Salvia Amistad and Friendship from Afar.

Exploring Salvias Near and Far
Uria has taught at UBA for 15 years. His academic work includes native plant exploration, an occupation about which he is passionate. Problems that others might see as setbacks tend to become serendipitous detours for Uria. He shared two examples at Salvia Summit II, a 2013 gathering of sage experts and aficionados in Southern California .

Due to what he calls "obsession" with locating a particular drought-resistant native in the wild, Uria refused to take a break when he experienced altitude sickness in the Southern Andean desert of Argentina's northwest provinces.

Instead of giving up, Uria drove downhill, decreasing altitude until he felt better and could resume his search for S. cololophos, an intensely blue-flowered relative of Chilean Mountain Sage (S. cuspidata). Persistence paid off when he found S. cololophos in a rock cropping.

During a second plant expedition, Uria's car hit a tree. Although he was okay, his car couldn't be repaired for a week. This time, Uria was in the humid northeastern province of Corrientes where he spent much of his unexpected stay exploring the area's lagoons and discovering varieties of the water-loving Pale Sage (S. pallida), including deep blue, light blue and white.

As Uria said at Salvia Summit II, Argentina is a huge country with geographic regions ranging from deserts to sub-tropical rain forests. In different parts of the nation, rainfall varies from about 2 to 37 inches annually. The latter number is for Buenos Aires where Christmas day is hot and humid during the Southern Hemisphere summer. Uria noted that Argentina's winter temperatures range from those of USDA zones 5 to 13.

It's probable that Salvia lovers from the American Southwest to the Southeast could find much to love in Argentine Salvias beyond the popular S. guaranitica species.

Experimenting with Annuals
Buenos Aires is on Rio de la Plata not far from the Atlantic coast and about halfway down Argentina. Rain pours year round. Despite this abundance of moisture, Uria has found that S. calolophos and S. cuspidata grow well in his backyard along with the moisture-loving natives S. pallida, S. rypara and S. stachydifolia.

Although Tropical Sage (S. coccinea), Scarlet Sage (S. splendens), Giant Brazilian Sage (S. subrotunda) can survive as perennials in the Zone 9 temperatures of Buenos Aires, Uria told FBTS that he mostly grows them seasonally as annuals along with Hormium Sage (S. viridis) and a variety of plants from Australia, California, the Mediterranean and South Africa.

Uria's backyard is full of annuals due to his research for a local gardening guide on the subject. He thinks that too many Buenos Aires gardeners rely on gardening advice from Spain, which doesn't have a similar climate.

Sharing Knowledge
Gardening, of course, is a game of trial and error for all of us who want to test the limits of zones and other growing conditions whether we're adapting a local native plant to a microclimate or a non-native plant to a different country. Advice that's right for one location may be wrong for another.

Professor Uria is one of many horticulturists -- both experts and amateurs -- whose experience, knowledge and photographs we greatly appreciate at Flowers by the Sea as we test the limits of the Salvias we grow.

If you have any questions about the Argentine native sages or other plants that we cultivate, please call or email us. And don't forget to visit Salvias.com.ar to see what's growing in Argentina.