Salvia Small Talk: The Gardens and Sages of Alcatraz 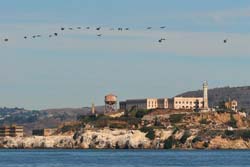 Winnifred Gilman was a volunteer who coaxed plant cuttings to root at San Francisco's Strybing Arboretum. To honor the plant propagator, the Arboretum named a newly discovered Cleveland Sage for Gilman in 1964. Her name has traveled far and wide due to the popularity of the intense violet-blue flowers, long bloom time and drought resistance of Salvia Clevelandii 'Winnifred Gilman'.

Winnifred Gilman Sage even lives on Alcatraz Island (aka "The Rock") -- once the location of a federal penetentiary but now a national park. The Garden Conservancy and the Golden Gate National Parks Conservancy share maintenance of the island's gardens. Winnifred Gilman is one of a number of sages that volunteers have used to rehab the Alcatraz gardens, which first were planted beginning in 1865.

The Garden Conservancy is a national organization that provides horticultural know-how and financial support to a wide variety of gardens nationwide that it calls "fragile treasures."

Alcatraz is fragile partly due to its thin layer of soil that the National Park Service says originally supported "sparse native grasses and shrubs." Its gardens also need support, because they were abandoned for more than 40 years following the prison's closing in 1963.

During the Civil War in 1863, the U.S. government established Alcatraz as a military post to protect San Francisco Bay and Northern California from Confederate invaders. It quickly transformed into a military prison and, in 1934, a federal penitentiary.

Military and civilian prisoners helped maintain gardens on Alcatraz with the help of topsoil taken from its neighbor Angel Island. Rehabilitation of a number of historic gardens began about 2006.

To add long-blooming color as well as drought tolerance, Gardens of Alcatraz manager Shelagh Fritz and volunteers have planted a number of Salvias. Aside from Winnifred Gilman, the plants include:

Writing at the Gardens of Alcatraz blog, Fritz says that frost is a rare occurrence on the Island, so plants seldom go dormant. However, in letter to Flowers by the Sea in March, Fritz notes that the winter of 2014 was unusually "cold and dry." Nevertheless, Fritz adds, all the Salvias did well. She selected them when seeking "tough plants that would bloom reliably all summer and into our dry fall."

Alcatraz is part of the Golden Gate National Recreation Area. It is open to tourists throughout the year except on Christmas, Thanksgiving and New Year's Day. Transportation is via ferryboat. For more information about visiting Alcatraz, click here at the National Park Service. If you are interested in volunteering as a gardener, please contact the Gardens of Alcatraz. 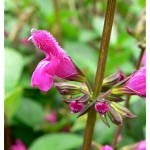