Salvias Down South: How Salvias Behave in Florida

“Oh behavvvve!” You might feel a bit like Austin Powers, international man of mystery, as you ponder intrigue in your Florida garden. Why aren’t the perennial Salvias you planted acting the way you think they should.

For example, if you're growing the culinary favorite Pineapple Sage (Salvia elegans) in Northern Florida and expect it to act like a woody perennial, you may be surprised when it dies back to the ground.

Yet if you’re a South Florida transplant who once grew Pineapple Sage in colder climes, you may be baffled now by its almost evergreen, nearly year-round appearance as a semi-woody subshrub. How did its tender stems get so tough, you may ask.

Other Puzzling Patterns
Or maybe your Autumn Sage (S. greggii) flowered bountifully in Central Florida but kicked the watering can when you planted it in subtropical South Florida.

Not all Salvias are cut out for life in the damp Southeast. The performance of those that grow well in Florida, including native species, also varies widely depending on the region of the state within which they are grown.

You can’t always count on Tropical Sage (S. coccinea) – a species that likely came from Mexico and was introduced to the South so long ago that it has earned the “native” label – to behave like a perennial. While it may seem to never go dormant in USDA Zones 9 to 11, it acts like an annual in cooler areas, such as Northern Florida where it proliferates by reseeding.

Regional & Seasonal Temperature Variations
When deciding what Salvias to plant and how to care for them in Florida, you need to consider the part of the state where you live. It’s important to take into account temperature variations in four basic areas -- North, Central, South and Tropical Florida.

North Florida (Zones 8a to 9a). If you live in the northern panhandle or north of Daytona Beach, you know that this part of Florida has distinct seasons. There are enough days of winter chill to grow apples and pears, but way too much for citrus. For Salvias adversely affected by sustained cold weather, this means it’s a good idea to winter mulch up north. Remove the mulch as soon as spring arrives. Locating your Salvias where they will receive some afternoon shade can be helpful during the fierce heat of summer wherever you live in Florida.

Central Florida (9a to 9b). Winter is milder for those who live mid-state near cities such as Tampa and Orlando. Frosts are infrequent, so you probably don’t have to mulch your Salvias. Late-blooming Salvias, such as Prairie Sage (S. azurea) and Mexican Bush Sage (S. leucantha) have a better chance of flowering here.

South Florida (Zones 9b-10b). This subtropical area is primarily Zone 10 country that includes most of the islands in the Florida Keys. Citrus loves it here, but the combination of Summer heat and humidity may be too much for Autumn Sage, which does best in Zones 7 to 9. Tropical Sage (also known as Scarlet Sage and not to be confused with S. splendens) is a good choice.

Tropical Florida (Zone 11). Key West comprises the main part of this tiny region, which is generally hot and humid. Salvias aren’t common here, but you may want to try Pineapple Sage or Tropical Sage in amended soil, because they grow well in Zone 11.

Florida Native Salvias
Native plants have developed over long periods of time to fit into their environment harmoniously. They thrive under local conditions, including soil quality and moisture. Other native plants, as well as native animals including insects, keep them in line so they don’t become invasive. These include Prairie Sage and Tropical Sage.


The cerulean blue flowers of Prairie Sage bloom late summer to fall in zones 5 to 9. It grows 24 inches tall and 18 inches wide with long, narrow, lanceleaf foliage that flutters in breezes. It's a good sage to tuck among ornamental grasses and other perennials where it can poke out and capture attention.

At Flowers By the Sea, we sell a wide variety of Tropical Sage cultivars, which grow well in zones 7 to 11 and bloom spring through fall. One of our most popular choices is the red variety Forest Fire, but we also grow cultivars with lavender, orange, pink, and white flowers. Depending on the cultivar, Tropical Sage may grow up to 48 inches tall and 24 inches wide.

Other Florida Favorites
Online gardening forums are a great place to discover information about what plants grow well in a particular area. Here is a short list of some non-native Salvias that Florida gardeners praise: Limelight Mexican Sage (S. mexicana ‘Limelight’); Mexican Bush Sage (S. leucantha); Pineapple Sage (S. elegans); and Roseleaf Sage (S. involucrata). Details about these favorites appear in our post Salvias Down South: Thirsty Salvias for Florida. It focuses on moisture-loving Salvias, because, as mentioned before, Florida can be a very wet place. And “Oh baby!” you don’t need the super-sleuthing ability of Austin Powers to see that thirsty Salvias might behave very well in Florida.

If you have more questions about what to grow in your Florida flower garden or concerning any of FBTS plants, please contact us. We're always glad to share information. 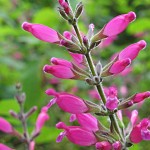