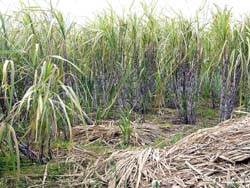 Many Salvias like their weather on the dry side, which is one reason why the genus is so prevalent in Southwestern landscapes. Yet if you select the right kind of Salvias, you can experience success in the soggy Southeast as well.

Florida is one of the wettest states in the nation. Given this characteristic, it is a challenge – but not a daunting one -- to select the appropriate Salvias for the state.

People complain a lot about constant rain in the Pacific Northwest. However, one of the best-selling souvenirs at Orlando’s Disneyworld is a plastic rain poncho sporting a picture of Mickey Mouse. Further south, Miami receives nearly 62 inches of precipitation a year and is only one inch shy of first place for the U.S. city receiving the largest amount of rain; New Orleans is the winner. In contrast, Albuquerque, New Mexico, averages less than 10 inches a year.

Southeastern Surprises for Southwesterners
Consider a group of imaginary Southwestern gardeners transplanted to Florida. Here are some conditions they might find surprising: First, Florida recurrently suffers from drought despite high average rainfall. Second, despite being called the “Sunshine State,” Florida has far more cloudy days than are average in the Southwest. Third, much of the state’s soil is so sandy, shallow and low on nutrients that it has to be amended for Salvias whereas it’s rare to fertilize them in the Southwest.

So Toto, you aren’t in Kansas and certainly not in New Mexico.

Deep Drinks and Droughts
Florida State University notes that on an “average day,” the state receives about 150 billion gallons of water and loses about 100 billion gallons to evaporation. So about 66 percent of the rainfall on any given day returns to the atmosphere. Plants need either lots of watering or drought resistance for the extended times when evaporation outpaces rainfall.

Yet, when Florida is wet, it is excessively so with an average annual rainfall about twice that of Kansas. However, even if it is a year of heavy rainfall, you need to water during Florida’s annual dry season, which is from late autumn to mid spring. So it helps to select Salvias that can soak up rainwater happily in times of plenty yet survive the dry season and periods of drought.

Intense Sun, Intense Cloudiness
Growing Salvias in Florida is also a matter of selecting plants that can tolerate varying levels of sunlight and warmth. Sometimes full sun and intense heat are at hand; other days cloud cover obscures rays and lowers temperatures.

Although once marketed as the Sunshine State due to its balmy winters, Florida only averages about 128 completely sunny days a year. In contrast, Albuquerque has 164. The Southwest’s extra days of sunshine make it a better location for producing solar energy than Florida.

Soil Improvement
Similar to the variety in an ice cream store, there are numerous types of soil in America. Florida soil is acidic, extremely sandy spodosol that forms in watery environments. It requires significant amounts of lime, fertilizer, compost and other organic matter to improve pH – chemical balance between acidity and alkalinity -- and to increase its nutritional elements.

Florida’s particular kind of spodosol, which occurs nowhere else in the nation, is called Myakka fine sand.

Organic matter improves soil texture so that it neither waterlogs plants nor drains so rapidly that it draws nutrients away from roots. It also attracts earthworms, which further fertilize, loosen and aerate soil. Florida soils are sandy and nutritionally weak largely due to excessive moisture.

Also, in most Florida gardens, you don’t have to dig far before reaching hardpan, a layer of soil so compacted that roots can’t penetrate it. When water rapidly sinks through Myakka fine sand, it travels horizontally until it can sink into a break in the hardpan and far from the roots that would like to drink it. Creating raised beds and adding plenty of organic matter can increase soil depth for root growth as well as moisture retention.

Just-Right Salvias for Florida
Two other posts in our “Salvias Down South” series talk about sages for different parts of Florida. One is How Salvias Behave in Florida, which considers planting choices in different regions of the state and touches on native species. The other, 15 Thirsty Salvias for Florida, offers nonnative plant choices that are a good fit for the state's damp soils.
These include the culinary favorite Pineapple Sage (Salvia elegans), which has bright red blossoms that cooks use in cakes and breads. Other promising choices in the Flowers by the Sea collection of moisture-loving Salvias include the dramatic Blue Vine Sage (Salvia cacaliifolia). Contact us for assistance. We’re glad to help you make sage choices about Salvias for Florida and other rainy places.

Just received my plants today from Flowers by the Sea,(my first order) and WOW, they are fantastic! I could smell them outside of the box, so when I opened it, it was awesome! The packing was great, and I am so glad I received them before it got too hot here in Texas! I cannot wait to plant...
Ruby Blanchard
Clearly I am addicted to Flowers by the Sea! I think I've just about ordered at least one of everything! The plants are all super healthy, and arrive in great shape owing to the (patented?) packing method. The hummingbirds, bees and butterflies are in 7th heaven. I HIGHLY recommend FBTS...
Laurel Burik
Thank you so very much for the wonderful service. I received my order quickly ,at the appropriate time and in pristine condition. Unfortunately I Cannot comment on the individual plants growing hardiness as they are still in hardening off process. Here in N.Y. We are still not frost free and we...
Karen Palmer
I love the salvia's that I received! They were beautiful, healthy and in-bloom. I will buy more in the future.
Daphne
Your website, plant quality, careful packing, rapid shipping (1900 miles in 2 days, thanks UPS!), & superb personal customer service will keep me coming back! My wish list is filling up already. THANKS Kermit!
John Hicks
The Salvias were very healthy and full, packed with care, and arrived undamaged all the way from California to Rhode Island. I highly recommend Flowers By The Sea. Their customer service is excellent!
Daune Peckham
Yesterday afternoon another delivery of FBTS plants arrived. They looked beautiful right out of the box. This is the fourth time I've ordered from you this year, and each and every plant was in great shape, ready to grow and bloom (except for the two that the gophers ate -- now I plant in...
Mary Jo Ballator
I recently bought 5 salvias in two varieties. I was impressed on how quickly they came and how carefully packaged they were. I cant wait to watch them mature, and will defiantly be buying more from you in the future! Thanks!
Elizabeth Thompson
I ordered an assortment of Mexican Native Salivias. I can report this: I received top quality, large plants that were very well rooted, & pinched back. The plants were well well packaged & delivered exactly as scheduled. No soil jostled, no damaged leaves/stems. I'm impressed.Worth...
markus
I recently received my first order of salvias from Flowers by the Sea. The plants were immaculately packaged. All the salvias had well developed root systems without being potbound. Despite their long journey they have a recovered quickly. I am very reliant on specialist mail order plant...
Cindy Evans
Submit a Testimonial
Read More