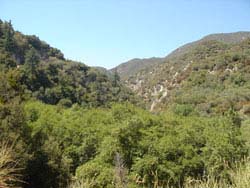 Native plants know how to get by on the local soil and moisture. That’s why xeriscape emphasizes use of drought-resistant native plants when possible. Other benefits of going native include greater freedom from pesticides, because it makes biological pest control by natural predators possible. In short, native plants and native insects strike a balance.

Planting native species also makes it possible to feed and provide habitat for local wildlife. That said, here’s an "aha" kind of thought about native plant boundaries: some seem artificial when looked at from the perspective of the natural world. For example, what grows well in Northern Mexico often does well in Southern California and other parts of the American Southwest.

California: Alta, Baja, Aha!
Once upon a time and not all that long ago, California belonged to Mexico. However, it retains claim to one of the toughest drought-resistant Salvias in the world – Cedros Island Sage (Salvia cedrosensis).

It is natural to consider Cedros Island Sage a California plant, because it is native to Baja (lower) California bordering the southern edge of Southern California. This division was once the beginning of Mexico’s Alta (upper) California.

In 1848, after two years of combat with the United States, Mexico signed the Treaty of Guadalupe Hidalgo ending the Mexican-American War and ceding 500,000 square miles of territory, including Alta California, to the U.S.

Upper; lower; does it matter here? We are including the tiny Cedros Island Sage, which maxes out at 18 inches tall, as one of our five must-have Xeric Salvias for Southern California even if it isn’t technically a native of the state. It is a small plant that can have a big, positive impact in a Southern California xeriscape garden.

Shades of Cerulean Skies
Other perennials on the list include Sacred White Sage, Black Sage, Santa Rosa Island Sage and California Purple Sage – all of which are lovely, tenacious and long blooming.

Put all these sages altogether – that is if you live in a USDA plant hardiness zone all can tolerate -- and you have a cerulean garden, ranging from the pale skies of noontime to the violets and deep lavenders of dusk.

But the most intense of these bluish blossoms are the ones from just south of the border. Perhaps this can be attributed to higher alkalinity in the soil, a trait that sometimes deepens blues.


Cedros Island Sage
Cedros Island is just north and west of the Baja peninsula’s southernmost state, Baja California Sur. Aside from its island home, S. cedrosensis is native to the severe coastal Vizcaino Desert of Baja California Sur. It exhibits the silvery, velvety foliage of Xeric Salvias accustomed to surviving in the most extreme circumstances. The hairs on the leaves help conserve moisture.

The humidity from coastal fog is crucial to keeping plants alive in the region, because some years there is as little as half an inch of rain. It’s partly the lack of precipitation that makes Cedros Island and the northern Vizcaino Desert a rich resource for salt mining.

Despite the delicate violet-blue of its flowers – a color as deep as Vivien Leigh’s eyes in Gone With the Wind – Cedros Island Sage is as tough a survivor as Scarlet O’Hara. Both these characteristics, combined with the pale silver of its leaves, make this Salvia an attractive choice as a groundcover, border plant or container choice in dry, full-sun locations in U.S.D.A. plant hardiness zones 9 to 11.

Although it grows in USDA Zone 7, Santa Rosa Island Sage doesn’t do well when temperatures are close to zero. So if you live where temperatures drop low, give it preferential planting in a warm spot such as a full-sun location near the foundation of your house.

Sacred White Sage
Stiff and fleshy, the long leaves of Sacred White Sage (Salvia apiana) are also made for retaining moisture and defying drought. Along with the foliage of their mainland coastal neighbor Black Sage, the leaves of S. apiana are the ones most often used for the spiritual ceremony of smudging.

Smudging involves bundling the sages and slowly burning them to release aromatic smoke that is said to bless individuals and places, such as homes.

Although it sometimes reaches up to 5 feet tall, Sacred White Sage tends to grow to 3 feet wide and tall. Its flowers are white to lavender and rise high above the foliage.

Black Sage
Similar to Sacred White Sage, Black Sage (Salvia mellifera) is adaptable to soils that vary from gravelly and nutrient-poor to ones that are richer and loamy. So don’t think you have to make conditions worse to make them better for these Southern California natives.

Although the foliage of Black Sage also generally gets no taller than 5 feet, its average height and width of 4 feet is a tad taller than Sacred White Sage. If you are putting them together, place S. apiana a bit in front of S. mellifera for greater harmony.

California Purple Sage
Whether you call it California Purple Sage because of its flowers or California Gray Sage due to its gray-green foliage, there’s something about Salvia leucophylla that summons the dusk. Its colors have an end-of-day intensity that adds depth to the plantings suggested here. Another characteristic to appreciate about this plant is the pleasant fragrance of its flowers. Most Salvias only have fragrant foliage.

California Purple Sage fits in well in Zones 8 to 9, flowers from spring into early summer and is on the tall side. It may grow up to 5 feet tall and wide if it is happy where you place it. As with all the sages in this post, give California Purple Sage lots of sunshine and little water once well established. Then it will give you lots of viewing pleasure.