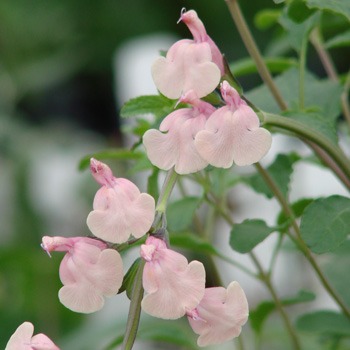 Whether planned or accidental, hybrids happen. This is especially true among the closely related Southwestern and Mexican species of Autumn Sage ( Salvia greggii) and Mountain Sage (S. microphylla). Known for bright red, orange and purple flowers, they often create mellow pastel hybrids when their genes cross -- a rare event in the wild due to being native to different areas of the Southwest and Mexico.

However, they are more than willing to cross-pollinate where the two species meet, such as in the northeastern Mexican state of Coahuila in isolated island-like spots, within narrow mountain ridges, as well as in plant nurseries and horticultural research programs.

This story is the first installment in a two-part series initiating our Cultivating Color series. It involves the late North Carolina Salvia specialist and organic chemist Dr. Richard F. Dufresne, who  helped us track the history of some of the hybrids in the Autumn and Mountain Sage group. Many are referred to scientifically as Salvia x jamensis. We like to call them Jame Sages, because plant researchers in 1991 found the first swarm of these hybrids near the village of Jame (pronounced HA MAY) in north-central Mexico. They also encountered a mystery that is yet to be solved -- the source of the yellow pigmentation that gives some of these plants a warm glow.

Exploring Many Aspects of Color
Cultivating Color focuses on color topics regarding the flowers and foliage of Salvias and their companion plants. For example, this article begins an exploration of floral pigmentation in S. x jamensis and the first warm pastel sages in the Autumn/Mountain Sage group.

The ongoing series also covers topics such as:

As Dufresne said and as far as we know, although a pure yellow species of Autumn or Mountain Sage may exist, no one has collected a specimen. This presents a puzzle concerning what parent species provided the yellows and rosy sunset glows of some Jame Sages.

The dominant reds and purples of the S. greggii and S. microphylla group are a product of anthocyanins -- phytochemicals famous for giving watermelon and blueberries their color and healthful antioxidant quality. In contrast, the red-orange coloring of many Salvia species and the yellows of types other than S. greggii and S. microphylla indicate the presence of xanthophyls, which are present in plants that have flowers in the yellow color range.

Autumn/Mountain Sage group members that have little or no anthocyanins and xanthophyls produce flowers in the cream-to-white range, such as Salvia greggii 'Texas Wedding'.

Xanthophyls need to be present for nature and botanists to create the peaches, salmon-pinks, nearly pure yellows, and sunny bicolored flowers of plants in this group. So Dufresne theorized that some sort of related yellow species may have snuck into the gene pool to create cheerful, warm-colored S. x jamensis hybrids. Another possibility he cited is the existence of a rare pure yellow S. greggii or S. microphylla species that no plant hunters have yet discovered.

Finding Peaches Among the Reds
How did the warm pastels of commercial hybrids such as Salvia x 'Elk Twilight's Rosy Glow' -- one of our Elk Rainbow Sages -- and Salvia x jamensis 'Yellow Pink' emerge? Dufresne said the current boom in hybridization of sunny Jame Sages likely began gradually with Texas nurseryman Lynn Lowrey's discovery of peach-colored Autumn Sages during plant exploration in the Mexican state of Tamaulipas.

Commercial hybridization began taking off following discovery of the Jame swarm -- something we dig deeper into in the second part of this article. However, Lowrey's peach-colored sages changed thinking about what colors to expect from S. greggii.

According to the Houston Chronicle's Chron.com website, the "soft-spoken and unassuming" Lowrey began plant collecting in Mexico in the 1970s. In Lowrey's 1997 obituary for Texas A&M University, Texas horticulturist Greg Grant said that San Antonio's Lone Star Growers was one of the nurseries for which Lowrey collected and propagated plants. Grant added that Lowrey was generous about giving away plants that he wanted to popularize.

Cox recalled that Lowrey had a passion for finding promising species growing in the wild, but never wanted recognition for his contributions to horticulture. Consequently, he would never have named a plant for himself.

Before leaving San Antonio in the late 1980s following a plant expedition to Hidalgo, Mexico, with botanist Manuel Flores, Dufresne received one of Lowrey's peach sages. Dufresne didn't remember who gave him the plant, but thought it likely came from Lone Star Growers and may have been the cultivar that was later named Lowrey's Peach Autumn Sage (Salvia greggii 'Lowrey's Peach').

As is typical in horticulture, one good share leads to another. Dufresne gave his peach Autumn Sage to friends at the influential Logee's Greenhouses in Connecticut. A few years later when Flores discovered his enchanted red-orange sages, Dufresne cultivated and spread word about the stronger of the two species, Peach la Encantada. Warm colors were finding their way into the Autumn/Mountain Sage fold.

Joining Up with Yucca Do's Plant Hunters
In 1988, which was around the same time that Flores and Dufresne were trekking through Hidalgo, Lowrey invited Texans John G. Fairey and Carl Schoenfeld to participate in their first Mexican plant expedition.

According to New York Times garden writer Anne Raver, the trip led to scores of plant expeditions by Fairey and Schoenfeld, including four with Lowrey.

Fairey, who was an art professor at Texas A&M University, had turned his artistry toward native plant gardening at his famous home whimsically called Peckerwood. Schoenfeld worked at the garden as a college student. Raver noted that they eventually opened a nursery together, Yucca Do, to sell excess rare plants from Peckerwood.

In 1990, Fairey and Schoenfeld invited Dufresne and Flores to participate in a plant expedition to Coahuila, which would eventually become famous among horticulturists and Salvia lovers as the home of a rainbow of Autumn and Mountain Sage hybrids named for the apple-growing community of Jame.

Dufresne noted that Coahuila's Jame area is tucked into a valley within a mountain range that encompasses many close ridges and which is called the "11 Sisters" by locals. The 11 Sisters Range is on the eastern border of the Central Mexican Plateau close to the Sierra Madre Oriental Mountains and roughly between Coahuila's capital of Saltillo and Monterrey, the capital of the neighboring state, Nuevo Leon.

The closely spaced ridges, Dufresne explained, offer conditions excellent for endemism -- the production of native plants that grow nowhere else in the wild.

At the time that he visited the area, Dufresne said, the 11 Sisters area was rich in horticultural diversity with plant populations varying from one valley to another and from one curve in the road to the next.

What's Around the Next Bend?
Part II of this article identifies early pastel introductions from Yucca Do and explains how the collection of these plants led to one of Dufresne's favorite Jame Sages, Salvia greggii 'Senorita Leah' (sometimes called S. x jamensis 'Señorita Leah'). Señorita Leah helps us discuss the difficulties of identifying plant parentage and how growing conditions affect color.

Meanwhile if you have questions about the Autumn/Mountain Sage group, including our Rainbow Jame Sages, or if you need advice about all kinds of warm colored Salvias, please contact us. We'll be glad to help you explore your options.