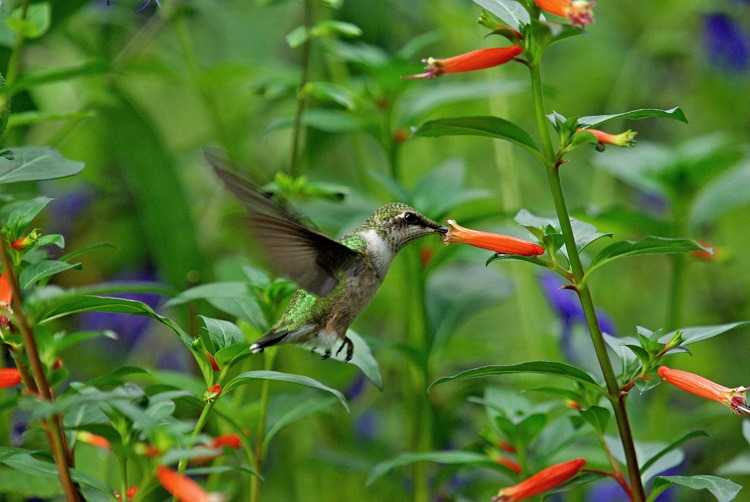 When massed in borders or standing out as a main attraction in a container planting, Cuphea x ‘David Verity’ is a visual feast for people as well as an actual feast for small wildlife. Rich in nectar, the plant’s dainty, cigar-shaped, orange-red flowers nestle amid a cloud of mid-green leaves shaped like tiny garden trowels.

If hummingbirds had the time and ability to tap into social media, they likely would praise David Verity Cigar Plant as one heckuva sweet watering hole. In fact, it may have been the voice of hummingbird gardeners chatting about the plant at online forums in the early 2000s that grew its buzz to star status as an easy-to-grow wildlife garden choice.

But in the mid-1970s, it was simply an accidental hybrid from a Los Angeles gardener who gave it to entomologist and horticulturist David Verity of UCLA’s Mildred E. Mathias Botanical Garden. Verity not only developed promising plants but also the careers of grateful horticulturists.

In 1976, the plant made its way to Steve Brigham, a botany student at the University of California, Santa Cruz. Eight years later, while employed by San Diego County’s Kartuz Greenhouses, Brigham named the plant Cuphea x ‘David Verity’ and published it in that company’s catalog.

In an autobiographical essay published in 2009, Brigham described the 1970s as a time of “horticultural revolution” when air travel became less expensive and made it possible for plant hunters to search far and wide for new species. He noted that it was a time in which “the newest garden plants...were grown, shared, and sold the old-fashioned way – by small specialist growers and botanical gardens, not giant corporations.”

So, the word-of-mouth publicity and generous sharing during this new era of discovery helped Cuphea x ‘David Verity’ become one of the most famous hummingbird plants in a matter of decades.

History of the Cuphea Genus

There are about 260 species in the Cuphea genus of which a limited number — ranging from short groundcovers to shrubs — are available commercially as ornamentals. There are also hybrids, such as David Verity Cigar Plant, which is likely a cross between C. ignea (Cigar Plant or Firecracker Plant) and C. micropetala (Candy Corn Plant). Both are natives of Mexico. Cigar plant is also native to Jamaica

Cupheas originated in the Caribbean, Mexico, Central America, and South America. They range from short groundcovers to tall shrubs. David Verity Cigar Plant rises up to six feet tall on occasion, but generally reaches four feet high and wide when planted in ground. Container planting tends to keep it smaller.

Many Cupheas have cigar-shaped flowers whereas others have bat or mouse “faces”  due to the arrangement of tiny ear-like petals as well as stamens and pistils at the opening of their blossoms. They are often called “calyx flowers,” because their tube-shaped blossoms fuse two structures that are separate in most flowers — calyx (the leaf-like sepals at the base of a flower) and corolla (the flower’s petals).

The Cuphea genus is a member of the Lythraceae or loosestrife family, which is also home to plants such as myrtles and primroses. In her 1968 paper about the history of Cuphea, Missouri Botanical Garden Curator of Lythraceae Dr. Shirley A. Graham credited Irish physician and botanist Patrick Browne (1720-1790) as publishing the genus name first. He included it in his 1756 set of books Civil and Natural History of Jamaica.

By the time Browne published Cuphea, Swedish botanist Carl Linnaeus had already invented binomial nomenclature, a plant-naming system which we use today. The Linnaean system gives each plant a unique botanical name based on two parts, a genus and a species name. Ignea, meaning “resembling fire,” is the species name in Cuphea ignea, one of David Verity Cigar Plant’s parents. But naming based on the binomial method wasn’t yet widely established in the 1750s.

Browne named the Cuphea genus based on one plant and gave it no species name. Also, no herbarium sample of Browne’s specimen exists. But Dr. Graham analyzed Browne’s botanical description of the plant closely and said it points to C. decandra. Later, in a 2001 paper, she noted there are only five “known” Cuphea species in Jamaica.

Unlike David Verity Cigar Plant or its parents, images and physical descriptions of C. decandra are elusive online despite the potential of its seed oil for health-related use. But there was a time when this patriarch of the genus was appreciated as a rare ornamental plant. We wandered long online, before falling into an 1848 rabbit hole called The Gardener’s Chronicle and Agricultural Gazette. Amid a report on hothouse life at Yorkshire’s Beningbrough Hall, the publication noted “the small, pale purple flowered Cuphea decandra, seldom seen.”

Seldom seen, indeed. But one could say that about the availability of Cupheas at garden centers, in general, before the arrival of David Verity Cigar Plant.

We grow a number of ornamental Cupheas at Flowers by the Sea and find that they are excellent companion plants for Salvias needing supplemental watering when rainfall is in short supply. David Verity is one of the favorites among the human as well as the hummingbird inhabitants of our Northern California farm. Butterflies love it as well.

Due to rapid growth and long bloom time from summer into fall, David Verity Cigar Plant is an excellent annual in gardens where average winter temperatures are lower than those of USDA Plant Hardiness Zone 8. At the warmest end of their range,  Cupheas are evergreen unless a surprise frost hits.

Give David Verity and all our Cupheas sufficient moisture, well-drained soil, and full sun or partial shade where summer temperatures are extremely hot. They’ll give you a spectacle of color and, most likely, a lot of hummingbird happiness.

Finally, give us a buzz if you have questions about any of our flowers. We’ll help you make great choices.