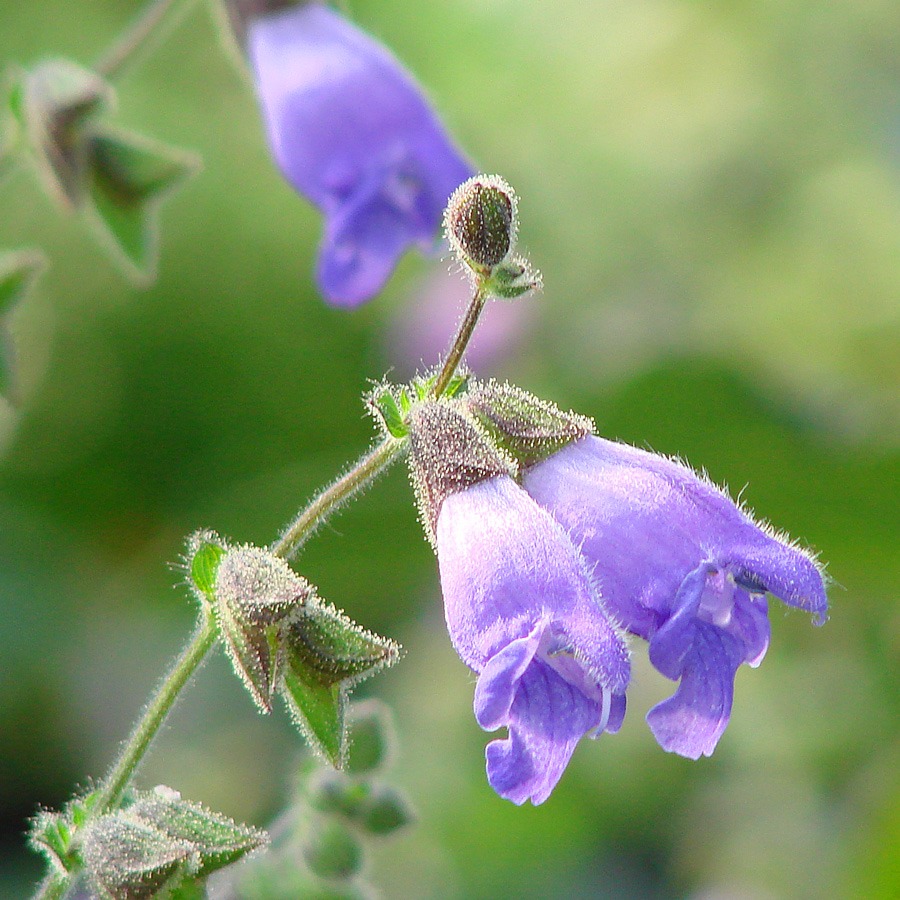 For plant collectors, a mystique surrounds rare species like Salvia hians, which is commonly known as Himalayan or Kashmir Sage. This is especially true when there is uncertainty about what the plant should look like. Perhaps the most famous image of S. hians is a 2012 photograph of UK plant collector Chris Chadwell. It shows him seated on a western Himalaya mountainside next to an abundantly blooming stand of a variety with violet-blue flowers that have white lower lips.

So why doesn’t the Flowers by the See variety of this rare species look exactly like the plant Chadwell found — a plant that seems to be the Holy Grail of Salvia collectors? We’ll do our best to explain.

It’s important to note that no flowers looking exactly like the ones in Chadwell’s photo appear to be for sale online. And we don’t know of any offline sources selling the variety. We don’t even know exactly what the original species plant looked like — a topic we’ll get into along with the species’ history and medicinal use in Part 2 of this article.

However, we have found other photographic images online for similar looking plants identified as S. hians. One image, without text except for plant name, is available in Ethnobotany of India, Volume 4: Western and Central Himalayas. There are also two photos of similar plants identified as S. hians at the efloraofindia website. One image is from the Bhadarwah Valley in the northwestern Indian state of Jammu and Kashmir (abbreviated as “J&K”), which borders Pakistan and China. Another is from Uttaranchal, another western state that also borders China. However, as various accounts report, the plant’s range extends to Bhutan on the eastern end of the Himalayas.

At his website, Chadwell notes that following publication of his photo, he received a request from a plant marketing company to use it commercially. But, as Chadwell states, he would never do that because the plant in the photo doesn’t represent all “forms” of S. hians. Species “vary in the wild,” he writes, “sometimes quite considerably so!” To produce a plant true to the one in the photo would have required illegally collecting plant cuttings, because (1) it wasn’t at the seed-setting stage and (2) if he had been lucky enough to legally gain its seed, results based on that seed likely wouldn’t have looked exactly like the parent plant.  According to Chadwell, during his Himalayan expeditions he only collected seed and always through legal means. We trust him.

Variation of any species is due partly to the varying growing conditions and locations of wild plants. In the case of S. hians, Chadwell notes, this includes different altitudes at which the species grows.

At Flowers by the Sea Farm, we grow many sages from the seed of wild species. When we luck on a seedling that shows great promise, we develop it as a parent plant from which to obtain cuttings and other plant material that we clone into flowers looking exactly like the parent. We may also cross two or more promising varieties to obtain plant traits we want, such as attractive form, bountiful flowers, long bloom time, and resistance to problems like drought, heat, and wind.

We grow a number of Asian sages including our variety of Himalayan Sage. If you follow our online catalog closely, you may have noticed that we made a subtle change in its botanical name, which we now call Salvia aff. hians ‘Super Elk Strain’. The aff. is short for affinis, which indicates that a plant is closely related to a particular species.

Genotyping of plants is still in its infancy (more to come in Part 2), so we certainly can’t afford to certify that our variety is genetically true to the original species. But we developed it from seed obtained from another trusted source in Kashmir.

Honeybees love our Super Elk Strain, which  reaches up to 60 inches tall and 48 inches wide in bloom during summer. It thrives with average watering based on local precipitation, but loves ample moisture. Consequently, it’s a good solution for damp areas as long as they provide partial shade. A location with morning sun and afternoon shade is ideal.

By the way, this is one of our most cold-tolerant sages and grows well in USDA Plant Hardiness Zone 5 where it can withstand temperatures dipping to 20 degrees below zero.

Check back in soon at The Everything Salvias Blog for Part 2 of "Himalayan Sage Is the Salvia Collector’s Holy Grail." But meanwhile, please contact us if you have any questions about this beautiful Salvia or other plants in our online catalog.