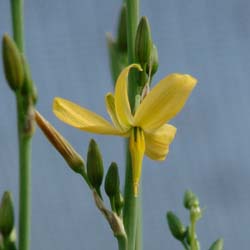 On our Northern California coastal farm, Texas Craglily (Echeandia texensis) is far from its Texas home in Laguna Madre. The "Mother Lagoon" is a long finger of water at the southernmost tip of Texas -- the Lower Rio Grande Valley -- and stretches from Brownsville north to Corpus Christi.

According to Texas Parks and Wildlife, the Lower Rio Grande is home to 300 of the state's approximately 425 species of butterflies. Texas has far more butterflies than anywhere else in the nation.So it isn't surprising that the golden flowers of Texas Craglily are among our best for attracting butterflies.

A Rare Plant Among Rare Birds
Laguna Madre is separated from the Atlantic Ocean by South Padre Island. At it's southern end, just northeast of Brownsville is Green Island, an Audubon Society bird sanctuary that is home to the world's largest colony of nesting Red Egrets (Egretta rufescens).

Texas Craglily, another rare species, is endemic to the island's sandy clay dunes. In honor of its brushy, 35-acre homeland, the perennial is also known as Green Island Echeandia. It's also native to clay arroyos in the delta region of Rio Grande Valley, according to the Lady Bird Johnson Wildflower Center.

Another common name for the plant is Mexican Hat Lily due to its flowers looking like upside down, floppy sombreros with tall crowns. Once considered part of the lily family (Lilliaceae), E. texensis has been reclassified as a member of the asparagus family (Asparagaceae) due, in part, to growing from corms instead of bulbs.

Although it isn't on the Red List, E. texensis is classified as a G-1 plant -- meaning it isclose to extinction -- based on a conservation system established by the global organization NatureServe.

Here is a detailed explanation from the U.S. Forest Service concerning factors necessary to identify a plant as being rare. Sometimes plants are threatened simply because they occupy a limited area. A 2016 report from the U.S. Geological Service titled An International Borderland of Concern: Conservation of Biodiversity in the Lower Rio Grande Valley lists E. texensis (Table 2, page 10) as being a "plant species of concern" in the Rio Grande River Delta. Species of concern aren't yet officially classified as endangered, but are considered to be rare or in decline.

Much has been written about environmental threat to wildlife and plant life in Laguna Madre and the Lower Rio Grande area if the border wall plans of the current federal administration succeed. Aside from affecting movement of animals and seeds (wind, water and animal dispersal) across the border, the wall would alter the Rio Grande's flood plain.

Collection and Cultivation
The Tropicos research site of the Missouri Botanical Garden notes that Texas botanist Robert William Cruden (1936-) scientifically named E. texensis in 1999 and that another Texas botanist, Benjamin Carroll Tharp (1885-1964), collected it on Green Island in 1922.

Echeandia is a New World genus named for Spanish botanist Pedro Gregorio Echeandía (1746-1817) and ranges from the Southwest to South America. According to The Plant List, the genus contains 80 species of craglilies.

Even though its foliage is petite -- just 18 inches tall and 24 inches wide --   grows tall flower stalks in autumn reaching up to 72 inches. It is extremely drought resistant, yet responds well to average watering when local rainfall is scarce. It's known to adapt well to moist, southeastern gardens, but be careful not to overwater because it is one of our blue tag plants that need sharp drainage to avoid root rot.

Regarding other growing conditions, bring on the heat, full sun and winter chill down to 0 degrees F for this tough, easy-to-grow perennial. Unless extreme weather or other events intervene, it puts in repeat performances in US Department of Agriculture Plant Hardiness Zones 7 to 10. Plus, it's important to note that deer don't seem to enjoy eating it.

More Information from FBTS
Please contact us if you have questions about Texas Craglily and how it might fit in your landscape. Feel free to ask us for more information about any of the plants in our online-only catalog.

We want to help your garden grow and help all our plants succeed.