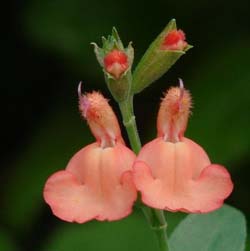 Viewing the creamy peach-pink and yellow of California Sunset Autumn Sage (Salvia x jamenis 'California Sunset') may remind you of the seemingly otherworldly pastels in a Georgia O'Keefe painting. Actually, anyone who has viewed sunset dipping into the mountains of New Mexico knows that soft pastels are common to Southwestern sunsets.

California Sunset also features a trait common to many plants in its genus -- colorful calyxes. Bright green ones with faint, rosy stripes cup its flowers, which have large, skirt-like lower lips.

A Native of the Village Jamé
The first species of S. x jamensis were discovered in Central Mexico near the village of Jamé, which is how the species got its name. The village is close to where the western and eastern Sierra Madre mountains meet and where the two parent species of Salvia converge.

In the United States, Mountain Sage is primarily native to Arizona. It is also found throughout much of Mexico. In contrast, Autumn Sage is native to Texas, New Mexico and parts of Northern Mexico south to the state of San Luis Potosi.

Drought-Resistant Gems
In nature, all three species grow at high elevations and in warm, dry, rocky lands. Due to their genetic heritage, they are fine plants for dry gardening. However they adapt readily to lower, moister conditions, such as in coastal gardens.

Comparing Family Traits
As with Autumn Sage, California Sunset is shorter and has smaller, smoother foliage than Mountain Sage. However, like Mountain Sage, it tolerates more moisture and shade than its other parent. Also, similar to Mountain Sage, it blooms in spring and fall and generally takes summer off.

But when it comes to flower color, S. x jamensis has a mind and a beauty of its own that often veers far from the bright colors of its parents. If you visit the Autumn Sage and Mountain Sage collections in our online catalog, you can quickly compare and contrast their resemblance to various Jame Sage offspring. It's like sneaking into a family get-together. If you have questions about these closely related Salvias or any other plants in the FBTS catalog, please contact us.