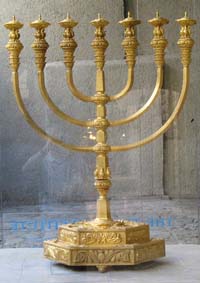 Heading into the season of long, dark nights and candlelit holiday dinners, it is pleasant to think of the candelabra-shaped Jerusalem Sage (Salvia hierosolymitana) lit up with raspberry and pale pink flowers in spring.

As the headline of a Newsday article once noted, Jerusalem Sage is one of the Israel's "menorahs, growing wild." In the article, garden writer Irene Virag reported that real menorahs, lit by Jews during Chanukah, may have been modeled on the shape of Jerusalem Sage as well as Pungent or Dominican Sage (Salvia dominica) and Land of Israel Sage (Salvia palaestina).

Salvia hierosolymitana is based on the Latin name for Jerusalem -- Hierosolyma -- and is related to the Greek word hieros, which means holy. This short sage, which reaches up to 24 inches tall when in bloom, is heat and drought resistant. It needs full sun, well-drained soil and winter temperatures no colder than those in USDA Zone 8.

When you plant Jerusalem Sage, you plant a connection to ancient Judaic and Biblical history.

Sages of the Temple Mount
All three candelabra sages grow at Israel's Noet Kedumim Biblical Landscape Reserve, which has suggested the Biblical name Moriah -- or Moria -- for each species. In Israel, Mount Moriah is the site where King Solomon built the first Jewish temple, so it is known as Temple Mount. The Hebrew word for Salvia is Marva, which is derived from Moriah.

If you look at the image of a menorah on a 1,400-year-old medallion recently excavated at the foot of the Temple Mount and compare it to photos of Jerusalem Sage in Noet Kedumim's gardens, you can't miss the structural similarities.

Jerusalem Sage was, most likely, among the plants burnt as incense during religious ceremonies at the first temple (roughly 970 to 586 BCE) and second temple --about 536 BCE to 70 CE (aka AD) -- on Mount Moriah. Many sages are aromatic due to plant chemicals called terpenes. Some, such as White Sage (Salvia apiana), are prominent holy plants in Native American culture.

The website Wild Flowers of Israel says that Israeli botanists Dr. Ephraim Hareuveni and Hanah Hareuveni -- a husband and wife team of plant explorers whose work led to the Noet Kedumim gardens -- are credited with identifying the candelabra sages as plants from ancient times that likely inspired the menorah's shape. According to Virag's Newsday account, the Hareuvenis found candelabra sage growing wild on Mount Moriah.

Temple Mount Turmoil
After the Romans destroyed the second temple, the Jews weren't allowed to rebuild it. Arabs conquered Jerusalem in 638 AD and built two mosques on the Temple Mount, which remains under Muslim control today.

Israelis and Arabs share the city, but contentiously. It is, for example, a legal offense for Jews to pray on the mountain. Also, Israeli archaeologists do not have access to the historical temple sites.

However, according to Smithsonian magazine, the archaeologists gained access to tons of soil excavated by construction workers when Muslim leaders built a new mosque entrance in 1999.

Despite the roughness of the excavation and the long-held belief that Christians used the ruins as a garbage dump, the archaeologists discovered artifacts -- such as coins and ornamental crucifixes -- indicating that the Temple Mount may have continued to be used for religious purposes before the Islamic shrines were built.

The Swiss Connection
Sometime during an 1846 trip to the Middle East, Swiss botanist and plant explorer Pierre Edmond Boissier (1810 -1885) visited Palestine and what would one day become Israel. During that time, Boissier collected Jerusalem Sage.

The scientific titles of all plants named by a collector are tagged at the end with a portion of the collector's name. That is why the full, formal name of Jerusalem Sage is Salvia hierosolymitana Boiss.

Jerusalem Sage is only one of the nearly 12,000 species Boissier described in his explorations of Europe, the Middle East and North Africa.

Culinary Ambassador
As with so many foods, Jerusalem Sage might be viewed as an ambassador from one culture to another.

Arab and Israeli cooks use the large, tongue-shaped, basal leaves in a manner similar to the stuffed grape leaves of Greek and Middle Eastern countries, such as Iraq. The leaves are soaked in olive oil and wrapped around combinations of rice, vegetables and meat.

Jerusalem Sage leaves and other unique greens are sold at street markets called shuks that look much the same as ones at an American farmers' market. The leaves are also added to soups and stews.

Curiosity and Conversation
Farmers don't get to travel a lot, but our curiosity about other places and their botany is boundless. At Flowers by the Sea, we are especially interested in drought-resistant sages found in many different parts of the world.

If you are curious about any of the hundreds of species we grow or have information to share, please contact us. We'd love to hear from you. Meanwhile, we wish you a happy holiday season.

Updated 12-03-2015: We thank Bette Elsden, director of graduate student life, University of Massachusetts, Amherst, for her helpful comment about how the Jews were not allowed to rebuild Temple Mount. We've corrected our article to reflect this fact.