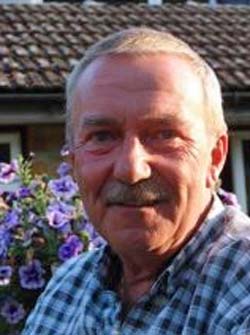 Robin Middleton passed away on January 2, 2020.  A great loss to his family, friends and the international Salvia community.

England is a garden-loving country. Famous public and private gardens abound in the county of Surrey, immediately southwest of London.

One large, public preserve is the Royal Horticultural Society Garden at Wisley, which at 240 acres is roughly three times the size of the Missouri Botanical Garden. RHS Wisley features lavish rose gardens and is famous for its trial fields of ornamentals and vegetables.

At the other end of the size spectrum, you find dramatic private home gardens in Surrey, such as the one where Robin Middleton grows more than 100 species and cultivars of Salvias. But there is more to this longtime gardener's passion than you can see in his yard and greenhouses.

An Online Preserve of Salvias
The Surrey garden that Salvia lovers worldwide may know best is virtual and public to anyone with access to the Internet. It is Robin's Salvias, Middleton's website displaying detailed color photographs and descriptions of hundreds of sages.

Some of the photos are from Middleton's home garden, while others are from his large international network of friends who are equally passionate about the genus. All are organized alphabetically by scientific name; the "A" page alone contains more than 50 types.

Although Middleton sometimes develops hybrids in his real gardens and helps friends with plant introductions, his website isn't commercial. It sells nothing but his love of sages. Middleton stresses that he is a home gardener and not a botanist.

Due to its wide range of species and large, clear images, researchers use Middleton's website to understand the foliage and flowers of sages they have never seen in real life. Gardeners access it to make decisions about designing flowerbeds before making purchases elsewhere.

Growth of a Gardening Passion
Middleton was born in Twickenham, a town on the Thames River just north of central Surrey and near Wimbledon. He describes his mother as being "a very keen gardener" who had the best selection of standard roses in town and a major influence on his avocation.

The retiree recalls his mother teaching him how to grow "easy plants, such as radishes and marigolds." By the time he was on his own at 19, he had his own garden, including petunias. He continued to fill his flowerbeds with bright annuals for many years until the day he visited a friend who had won a gardening award.

Asking her about a particularly lovely plant, Middleton says he replied "Rubbish!" when she said it was Salvia. He told her "Salvias are horrid, little, bright red bedding plants."

"I loved this plant so much that I needed to investigate," he says. His search for information led him to Christine Yeo, a Devon nurserywoman who specialized in sages and whose collection reshaped his thinking about ornamental gardening.

Major U.K. Salvia Collection
"I soon became hooked and started collecting Salvias from all over the world," Middleton says. He developed his collection by contacting other Salvia fans, including his friend, Professor Rolando Uria of the University of Buenos Aires. He notes that collectors have given him seeds, cuttings and plants.

Regularly visiting Robin's Salvias can be a transformative experience. The website took root in our lives at Flowers by the Sea a number of years ago when deep recession caused us to redefine our purpose and our way of earning a living by becoming a specialty nursery.

With a healthy dose of encouragement from the beautiful pictures and helpful information that the website provided, we fell in love with the Salvia genus. It is estimated to contain about 1,000 colorful, mostly easy-to-grow species, many of which tolerate drought and historically dry climates. So we confess that this article pays homage to the beneficial influence of Robin Middleton.

Although Middleton has one of the largest collections of sages in the UK, he says he doesn't want to apply for registered national collection status. It is a role that would require a much larger collection of the genus and would force him to grow sages he either dislikes or considers poor choices for the British climate. 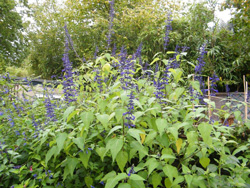 In addition to his extensive website, Middleton considers sharing plant materials and information to be one of his important contributions to the Salvia community. To encourage development and popularity of new introductions and lesser-known sages, he shares with other Salvia experts.

One example is the mysterious Peruvian Salvia sp. SL411, the seed of which he sowed worldwide by passing it on to growers such as North Carolina's Richard Dufresne around 2007. Researchers at the UK's University of Reading are trying to determine the parentage of this large-leafed, crimson-flowered species.

Home Garden Favorites
If you ask Middleton which sages are his favorites, he likely will tell you it is a "crazy question." He says that his preferences shift day by day although he is consistently fond of Friendship Sage (S. 'Amistad').

As to favorites that he has developed, Middleton says that he doesn't know enough about hybridization to attempt it in a methodical, scientific way, "but I play around (collecting) seeds every year" and finds that about 5 percent of the plantings produce promising results.

"Now and then something great occurs," he says, such as the lilac-pink Peter Vidgeon Jame Sage ( S. x jamensis 'Peter Vidgeon'), which he named for a close friend, and the hot pink Penny's Smile Hybrid Sage (S. x 'Penny's Smile').

Away From the Garden
When Middleton isn't working in the garden or his two 8-by-12 greenhouses, he likes to relax with opera. It shouldn't be surprising that one of his favorite arias is Légende de la Sauge (Legend of the Sage) from 19th century composer Jules Massenet's opera Le Jongleur de Notre-Dame (The Juggler of Notre Dame). And it shouldn't be surprising that the aria concerns, in a magical, camouflage-type way, the ability of sage to protect people. Many types are well-known historically as folk remedies.

But it is more the beauty of the genus on which Middleton focuses in page after page of his colorful website.

Building a Collection
If you have questions for Robin Middleton about his experience with specific sages or concerning how he built his collection, please email him via his website. He is gracious and prompt about responding to inquiries.

Flowers by the Sea also knows plenty about collecting a wide range of sages and companion plants. So please feel free to contact us as well. We'd be glad to help you add to the garden-loving atmosphere of your community. 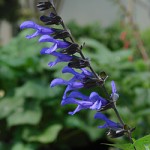