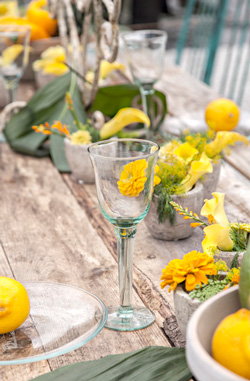 Then imagine Kathy Musial, curator of live collections at Southern California's Huntington Gardens, as one of the guests sharing her experiences plant trekking in Australia and Chile or co-managing some 14,000 varieties of plants at Huntington in Pasadena.

Musial helped coordinate the Salvia Summit II plant conference at Huntington, which is home to more than 50 species of true sages, including its own introductions, such as:

Topics on the Dinner Menu

During the imaginary dinner, Musial might talk with you about how Huntington plant explorers found the parent species of the two S. gesneriifloras on a volcano in Mexico.

As the dinner progresses, Musial might explain the intricate pollination process she devised for reanimating an equally tropical Corpse Flower (Amorphophallus titanum) into bloom every four to five years. 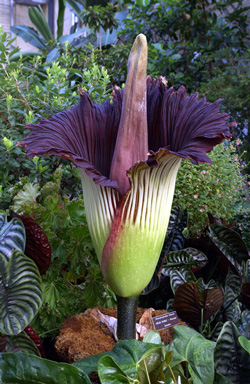 Corpse Flower is mighty large, and at up to 12 feet tall this Arum sometimes is called 'Titan'. It's also mighty stinky -- some say it smells like rotting flesh -- so you might have to forgive Musial if she mentions it during dessert in this daydream.

Now imagine an endlessly curious child focused on birds, reptiles, rocks, minerals, cactus and the garden at Musial's elementary school. It was her first grade gardening experience that caused Musial to try gardening at home even though no other family members were gardeners.

These early experiences likely led to her lifelong love of radishes, Musial says, because they were the only vegetable to succeed in her garden.

However, by high school, Musial mostly looked skyward instead of down at the soil. A gift of a telescope made her decide to become an astronomer. Yet the skies in the San Fernando Valley where she grew up were "light polluted," Musial says, so the self-described "book geek" did most of her stargazing by reading everything she could find about astronomy at the public library.

Musial notes that she was "hardcore math and science all the way." Calculus, chemistry and physics left her without time for a biology class. Yet just before college began, she shifted focus to biology when she became an equally hardcore bird watcher and realized she couldn't stop reading back issues of Natural History at the library. She switched her college major to biology.

"I didn't have a clue what I would do for a career," Musial recalls. "Maybe wildlife biology? Park ranger…. I had never even heard of horticulture."

But that was the direction in which her career veered when she took a class in plant taxonomy at the University of California, Los Angeles. It fit her analytical mind.

The class included several field trips to botanic gardens and was taught by Frank Almeda -- now her peer and friend -- who moved to San Francisco the following year as senior curator and chair of botany at the Institute for biodiversity Science and Sustainability, which is part of San Francisco's California Academy of Sciences.

During college, Musial was "desperate " to find meaningful work that would buy food and pay bills. She wanted to work for the university's botanic garden, but was told she didn't have the necessary experience.

So Musial found a job with an interior plantscaping company ("Something else I'd never heard of.") and entered a two-year extension program in horticulture after graduating from UCLA in 1980.

This led to a grant-funded position in 1982 at the Huntington as an assistant botanist inventorying the plant collections. Finally, avocation became vocation and Musial found her home.

A Day in the Life of a Plant Curator

If you have ever been curious about what it is like to administer a botanic garden, Musial offers a glimpse into her daily responsibilities. However, she notes, there is no such thing as a typical day.

"Every single day is different and tasks change according to the season, and of course everything is always weather depending," she says. For example, heat waves or cold snaps can halt planting and change plans.

Musial works with other staff to oversee the Huntington's plants. Except for the cactus and rose/camellia collections, she acquires and manages most of the other plants in the gardens. Here are some of her responsibilities:

There are lots of extracurricular duties that Musial doesn't mention, such as co-authoring the 2012 two-volume book set Conifers Around the World and writing articles for Pacific Horticulture, a publication of the Pacific Horticultural Society for which she formerly served on the board of directors and led travel tours. 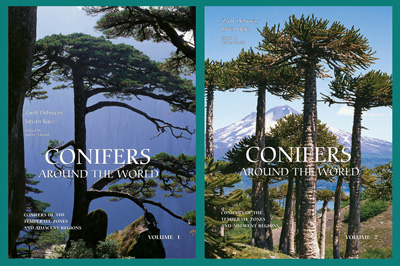 Public gardens face many of the challenges that bedevil home gardens, but on a larger scale. In both cases, severe weather can change landscape dramatically.

However, some problems loom on a grand scale in botanic gardens. These include legally mandated quarantining of plants in order to protect against unexpected pests and diseases.

Home gardeners who love houseplants regularly quarantine a new addition to indoor greenery while waiting to see if any problems develop.

In contrast, Musial notes, botanic gardens face such a large regulatory burden concerning domestic and international movement of plants that multiple quarantines are underway every day.

Quarantines protect collections from devastation. For example, Musial says, Huntington and the Los Angeles Arboretum have many species that are vulnerable to the new "double whammy" of the Polyphagous Shot Hole Borer beetle, which drills into trees and leaves Fusarium fungus behind.

The beetle is a big problem for Huntington, Musial says, because the gardens contain 200-plus tree species that are potential hosts. According to Musial, this kind of vulnerability is making it increasingly difficult for botanic gardens to import plants.

However, the lure of non-native plants is particularly difficult to resist when traveling abroad. So Musial says she tries to import seed instead of live plants when possible to minimize invasions.

Although a lifelong resident of the Los Angeles area, Musial is an expert on Australian plants and has made many trips to that continent. Her travels also have included two trips to the dry, high Andes of Chile.

Late this summer, Musial will visit Australia's Red Centre, which is home to the Australian National Botanic Gardens and the monolith Uluru -- also known as Ayers Rock. As the area's name indicates, it's dry, sandy soil is bright red. Plants are sparse and drought resistant. Uluru is famous as a spiritual center of the outback. If a plant thrives in droughty conditions in Australia or Chile, Musial says, it won't necessarily thrive at Huntington. When selecting plants to introduce at home, she considers factors such as differences in soil pH and fertility as well as heat and humidity. She stresses that seeing plants in their native environment aids her decisions.

Nevertheless, Musial says, conditions that seem contrary to a plant's home environment may still work; opposites can attract. She notes that some of Southern California's toughest landscape plants come from far different climates. For example, the Australian Silky Oak ( Grevillea robusta) does well along dry freeways although it is a rainforest tree.

Southern California is "blessed… with a climate that allows the cultivation of a wide range of plants," Musial says. She adds that she is happy to continue railroad magnate Henry Huntington's vision of cultivating "a wide variety of plants."

"At one point," Musial concludes, "a mission statement for the gardens was that we celebrate the diversity of the plant kingdom."

Back to the Dinner Party

Sometimes a real dinner party is tastier if it celebrates diversity. Who says you can't serve eggrolls with Thanksgiving turkey or Middle Eastern hummus with Danish whole-grain bread?

And maybe you should add a side of radishes to honor childhood curiosity that blossoms into a beautiful career in the garden. Flowers by the Sea thanks Kathy Musial for participating in our Sage Experts series, which focuses on Salvia specialists — both amateurs and professionals -- in settings ranging from botanic gardens to universities.

Please feel free to write or call us at FBTS if you have any questions about Salvias -- including introductions from Huntington Gardens -- and companion plants to add to the visual feast in your garden.

An error appeared in the original publication of this story in which we referred to Kathy Musial as a member of the Pacific Horticultural Society board. Musial retired from the board two years ago and no longer leads tours for PHS.