It was an accident of sorts. In an interview with Flowers by the Sea, Jesús Guadalupe González-Gallegos -- better known as Jesus González by sage aficionados -- says he became a Salvia expert by chance.

Uncertain about which direction to take with his botanical studies, González found his path one day when he chanced on a plant with "bright red corollas" while doing fieldwork with the University of Guadalajara. 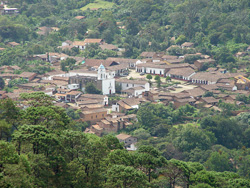 The curious student was part of a team of plant explorers. They were studying wild flora in the tropical village of San Sebastian del Oeste outside of Puerto Vallarta, which is on the Pacific coast in the Mexican state of Jalisco.

González asked his professor for the plant's scientific name, but the teacher could only say "It is a Salvia."

"This happened again and again in a trail of about 4 kilometers," Jesús recalls. Perplexed by the number of attractive plants that were either unknown or had never been scientifically named, he began to envision an academic course of action.

González says that the lack of names for so many species from the same genus "captured my interest and soon I started my taxonomic studies on Salvia."

From Hide-and-Seek to Plant Seeking
González says that although he was "always in touch with plants since I was a child," he would have never imagined that one day he would be working to uncover their mysteries.

Instead, González recalls playing with cousins and friends in cornfields and along creeks. They ran through grasses and daisies and played hiding games while "experiencing the wide array of smells and bright colors."

Vegetation is "megadiverse" in Mexico, González says. When he first decided to specialize in Salvias, González notes, he was attracted to "the overwhelming diversity of the genus and the potential contribution that its study could represent."

Salvias are the source of research worldwide due to the potential medical and agricultural properties of their powerful and often aromatic chemicals called terpenes.

González says the anatomical and chemical information about the vast array of Mexican Salvias is "scarce."

If you search the terms "Salvia" and "Mexico" online, the great likelihood is you will receive a page of links primarily concerning Diviner's Sage ( Salvia divinorum), the only species in the genus with psychotropic characteristics. Research continues about the medical benefits and drawbacks of that species. 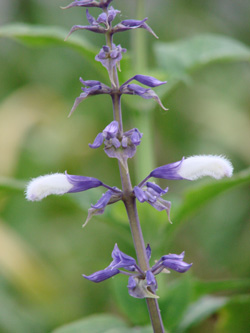 However, as González reports, there are more than 300 species of Salvias in Mexico and "each of them is like a small factory producing several chemicals" containing "unlimited" possibilities for beneficial uses.

Publishing and Presenting
Since his epiphany in the fields of San Sebastian del Oeste, González has published several new Salvias in various scientific publications. Publishing a plant is the laborious, expensive and time-consuming process of establishing the plant's scientific name and description. 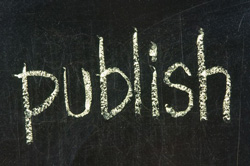 The report contains detailed observations and illustrations of each plant's form and distinguishes each from similar species. It also explains how the plants were named and where they were found. While S. ibugana and S. ramirezii both have sky blue flowers, S. carreyesii is violet colored.

Supporting Salvia Research
How can American gardeners support research about the Salvia genus in Mexico? That is one of the questions that Flowers by the Sea asked Mexican Salvia expert Jesús González, who is a graduate student in botanical studies at the University of Guadalajara.

González says there is no organization in his country devoted exclusively to research about sages. However, he notes two herbariums with which he is affiliated that would appreciate donations toward the study of the genus. They are the University of Guadalajara's IBUG (Herbario del Instituto de Botánica de la Universidad de Guadalajara) and CIIDIR Durango (Centro Interdisciplinario de Investigación para el Desarrollo Integral Regional).

Furthermore, González says that although there are no formal cooperative research projects about sage between U.S. and Mexican organizations, he is currently involved in an informal support network. He is collaborating on Salvia studies with Dr. Kenneth Sytsma (University of Wisconsin, Madison) and Dr. Bryan Drew, a post-doctoral researcher at the University of Florida.

Sytsma, Drew and González are sharing research about the phylogeny (a family tree of physical characteristics) of Calosphace, a Salvia subgenus containing about 500 species -- many native to Mexico. González says that Systma and Drew have provided guidance as well as lab work and analyses concerning DNA sequences of Calosphace Salvias. It's unknown as yet what medical or commercial possibilities these plants present.

Although not yet done with his graduate studies, González has become a top taxonomist regarding sages of Western Mexico. He spoke on the topic in 2013 at Salvia Summit II, a gathering of international sage enthusiasts and experts that was held at Southern California's Huntington Gardens.

Correcting Confusion about Plant Names
Plants sometimes have more than one scientific name. The official scientific name of any plant is the first one it was given, according to the International Code of Nomenclature for algae, fungi and plants. Later species names accidentally applied to the plant are considered "synonyms" and fall into disuse when the mistake is discovered.

González points out that gardeners and researchers become confused when multiple scientific names exist for a single plant.

"The multiplication of species names was more common in past centuries when the flow of information was slower, and the results of research could pass unnoticed for decades," González says.

But he says a larger headache occurs when scientists mistakenly say that two distinct plants are one in the same. Then scientists erroneously identify the name of a species as being a synonym for another, different plant. This is particularly problematic in a large genus, such as Salvia, which contains about 1,000 species and in a country, such as Mexico, where much plant life is yet to be scientifically described.

So aside from publishing about new species, González and various colleagues have produced reports setting the record straight about synonym errors regarding Mexican Salvias. In particular, they discovered that the authors of the 2012 book Flora Mesoamericana had labeled certain Salvias as not being distinct species and had listed these plants' names as synonyms for other species.

González and co-author Olga Jazmín Gama-Villanueva in 2013 published a response in the journal Phytotaxa titled Resurrection of Salvia species (Lamiaceae) recently synonymized in Flora Mesoamericana. In it, they explained the uniqueness of the eight species and restored their names as ones that are scientifically accepted. The plants are:

For example, González says, the authors of the book claimed that S. nepetoides and S. dichlamys were synonyms for S. amarissima. Yet there were obvious differences between the foliage and flowers of the three plants.

Putting on a Taxonomist's Boxing Gloves
What is a taxonomist to do about maintaining an accurate record of his native plants but to put on his academic boxing gloves? So González is working on an elaborate record of West Mexico Lamiaceae that is called a taxonomic treatment.

González says the treatment will include "an identification key, updated descriptions of about 100 Salvia species, photographs of most of them and distribution maps." He estimates publication will occur in 2015 and says it will be in Spanish.

Putting on a Gardener's Gloves
We thank Jesus González for taking time to share his life and work with us. He deserves appreciation, as well, for his daily efforts to straighten out the classification of so many Salvias. We like having correct information about the genus and the sages we grow. 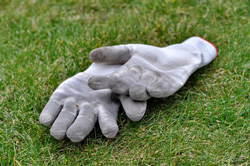 González tells FBTS that he thinks most Mexican Salvias can be cultivated in the U.S. with "proper handling." As with so many Salvia experts, he says it helps to understand a plant's native environment -- the soil, temperature range, sun exposure and moisture level it prefers.

González points out that American gardeners have grown some species for decades and that these include plants now labeled as being among "the easiest plants to be grown."

This is true. Many Mexican species now proliferate nationwide; at FBTS, we cultivate many. We're glad to talk with you about which ones may be adaptable to your growing conditions. Just give us a call or send us an email.