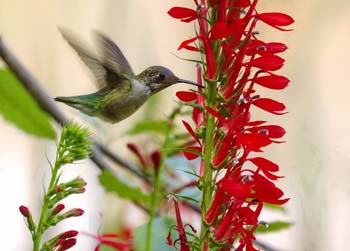 If hummingbirds could speak, they would buzz gardeners' ears demanding, "Plant Lobelia. Plant Salvia. Do… it… now! Becauzzze they're tazzzty. "

Top-10 lists of hummingbird favorites almost always contain Salvia and Lobelia, because each genus is nectar rich and offers many species in bright reds, oranges and pinks. 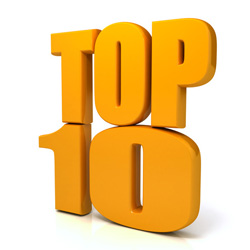 Hummingbirds have a weak sense of smell, but bright colors lure them to flowerbeds. Australian scientists provide a clue to understanding this behavior. They theorize that unlike bees, their nation's honeyeater birds -- which have long beaks similar to those of hummers -- are drawn to the red spectrum because the birds' vision is better adapted to the long wavelengths of the red spectrum.

Lobelias are great Salvia garden companion plants as long as you match them with sages that share their cultural needs. For example, many Lobelias -- particularly Cardinal Flower (L. cardinalis) and its hybrids -- love moist soil. In the wild, they favor life in meadows, along the shores of waterways and in bogs and other wetlands. Two water-loving matches are Big Swing Sage (Salvia x 'Big Swing') and Bog Sage (S. uliginosa).

Ninety percent of a hummingbird's diet is nectar. The remaining 10 percent comes from pollen and insects. Hummingbirds gather all these foods from plants with tubular flowers that have co-evolved to be just the right fit for long narrow beaks.

For example, it appears that the Ruby-throated hummingbird ( Archilochus colubris) and Cardinal Flower co-evolved to meet each other's needs. The bird, which predominately migrates up the Atlantic coast, dines on Cardinal Flower along its entire travel route.

According to a study of Cardinal Flower pollination in the March 2012 issue of the journal New Phytologist, the plant is only pollinated by Ruby-throats within its Canadian range.

Despite proliferating on the East Coast, Cardinal Flower is native to most of the U.S., including states known for dry climates.

Dining isn't peaceful for hummingbirds. First, they have to work hard for each sip as they beat their wings rapidly in a figure-eight pattern while hovering. Second, they zip from blossom to blossom seemingly nonstop to fill up.

Third, hummingbirds aren't keen on sharing. They have to consume lots of nectar and eat plenty of insects to fuel daily life, which may include long migratory stretches. So they expend energy keeping other hummingbirds away from their favorite plants.

One of our favorites at Flowers by the Sea is Giant Red Cardinal Flower (Lobelia x speciosa 'Compliment Deep Red'). Hummingbirds commonly pester us whenever we work near it.

One follower of our Facebook page recalls watching hummingbirds chase a child in his backyard after the child clipped some Lobelia stems and tried to walk away with them. "He dropped the flower heads right there and ran off."

Lobelias contain both male and female flowers on the same plants. This characteristic is called protandry.

Another distinctive -- and perhaps confusing -- characteristic of Lobelias is that they aren't truly perennial. Herbaceous growth and roots die after Lobelias set seeds. However, they seem perennial, because new roots develop from lateral shoots set by the lowest leaves on the plant. These become basal rosettes that overwinter to bloom the following growing season.

Also, if they are growing in persistently moist soil, Cardinal Flowers sometimes reseed. Unlike Salvias, which can suffer crown and root rot from mulching during the growing season, Cardinal Flowers benefit from it. You should surround, but not cover, the basal leaves with a layer of organic matter, such as grass clippings, wood chips or leaves. During winter in areas with moderate temperatures, mulch shouldn't cover the basal rosettes.

There are more than 400 species of Lobelia worldwide. Forty-three are native to America. These include L. cardinalis, L. laxiflora and L. x speciosa (a cross of L. cardinalis and L. siphilitica). Lobelia siphilitica once was thought to cure syphilis.

Based on our observations, including persistent head and shoulder bombing, hummingbirds are devoted to all our Lobelias, a number of which also attract butterflies. One species, Lobelia x speciosa 'Compliment Deep Red', is a magnet for honeybees as well. All our Lobelias prefer rich soil and grow well with average watering, but love ample moisture. Their USDA Plant Hardiness Zones start as low as Zone 4. These classifications concern the most extreme winter temperatures plants reliably tolerate.

Whatever it is that hummingbirds see when they look at all the flowers they covet, we are thankful for their vision and taste for nectar. Their pollination makes our world so colorful. Consequently, we'd like to encourage you to feed them what they enjoy and need -- Lobelias and Salvias.

If you have more questions about FBTS hummingbird plants, please feel free to email us or call. Also, please check our Everything Salvias Blog for additional hummingbird articles at Sage Words About Wildlife and Hummingbirds in the Garden.