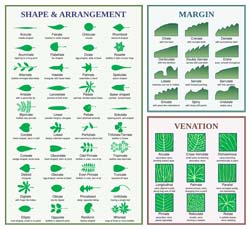 Salvias are appealing for their foliage as well as their flowers. Helpful though botanical terminology can be, for those who are unfamiliar with it, scientific classification may result in confusion.

Not everyone has time to learn how to talk the language of leaves. Researching definitions of terms such as a 'lanceolate' versus an 'oblanceolate' leaf shape or foliage arrangement that is 'simple' versus 'bipinnately compound' can be frustrating to many gardeners.

So we try to keep our plant descriptions as accessible as possible by saying, for example, that the 'hastate' leaves of many Asian Salvias are 'arrow shaped.' Nevertheless, scientific terminology often is simpler to use in cases where it is difficult to find one or two words to describe a term. For example, it is much quicker to say 'bipinnate' than to say 'pairs of leaves lined up directly opposite each other on a branch.'

So to make life easier for those who aren't well versed in the language of plant classification, we suggest a visit to resources provided by Name That Plant or, perhaps, a university horticulture department.

However, for those who love Latin and pop tests, we offer the interactive Leaf Matching Quiz from the University of Florida, which tests your knowledge of leaf shapes from tip to base as well as foliage margins, ribs and texture.