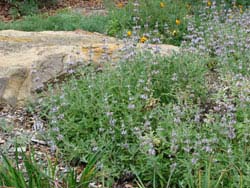 Sage is the signature fragrance of the American West, according to Los Angeles Times reporter Emily Green, who writes regularly about dry gardening. Green says it is as essential to a Western garden as lavender is to a French landscape.

Green adds that sages (Salvia spp.) aren't just a symbol of the West's pioneer past, but a 'powerhouse plant of our future' due to the drought tolerance of so many species.

In addition to California native sages, Green enjoys Canary Island Sage (Salvia canariensis), which she describes as the 'star of spring gardens.' She notes that if you are willing to spare some of the plant's buds as habitat for caterpillars, Canary Island Sage still blooms bountifully while acting as a 'butterfly nursery.'

Cj Brander
It's too soon to evaluate my new agastache plants as mature plants. What I can say is that they arrived promptly and in great condition, are all planted and blooming, even as young as they are. I love your website, and your detailed information on so many varieties of sages and Agastache....
Shari
I ordered 25 plants in two separate orders. They arrived quickly and in great condition. Don't be put off by the small size of the pots (3.5\"), as the plants are large and healthy, more like 1 gallon size plants you'd get from your local nursery. In only a couple of weeks, several of the salvias...
Mike Belcher
I ordered two Salvia Amistad from FBTS. The plants arrived in great condition and the soil in the pots was still moist. I set them outside in partial sun to let them \"harden\" and in a couple of days replanted them in larger containers. They are flourishing and have more than tripled in size...
Glenda Hawthorne
Thank you so very much for the wonderful service. I received my order quickly ,at the appropriate time and in pristine condition. Unfortunately I Cannot comment on the individual plants growing hardiness as they are still in hardening off process. Here in N.Y. We are still not frost free and we...
Karen Palmer
This afternoon was much better than Christmas morning. My latest shipment of FBTS plants arrived, and all are in great condition. Please thank all who helped with the excellent packing job. The plants were moist and well protected from breakage. The Agastache â€˜Blue Boaâ€™ (one in full bloom!)...
Alicia Rudnicki
I am a Salvia fanatic and have fell in love with this company and their amazing selection of unusual salvia. Keep them coming!!!!Colleen
colleen james
Although the plants from FBTS are smaller than you would get if you bought them in gallons, they go into the ground really well! I recently redid an area of the front yard with a combination of gallon plants from the local nursery and smaller plants from FBTS, and while almost all the plants from...
Brooke M
This is my second year ordering from this fine nursery. The plants are large and healthy, and the choices are spectacular! They were very well packed and shipping was very quick.
PS
Ordered a dozen assorted salvia, all arrived in great shape, plus the website has plenty if guidNce for where to site the plants and how to care for. Great company's, gorgeous plants, great packing job. So excited for these new additions to my garden.
Judy Potwora
Submit a Testimonial
Read More