Your cart is empty.
You are here    Flowers by the Sea / / Salvia Soothes Eye, Heart and Honeybees in Remembrance Gardens... 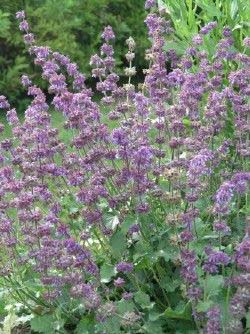 Planting and nurturing gardens are acts of hope, faith, perseverance, and remembrance and, in some cases, of healing.In the days following the terrorist destruction of New York's World Trade Center on September 11, 2001, one article in The New York Times focused on the recovery of 30 acres of gardens of the Battery Park City Parks Conservancy a few blocks south of where the Twin Towers once stood.

Miracle Salvia in the Gardens

Wearing heavy rubber gloves and respirators, park workers rescued the gardens along the Hudson River from ashy debris that was 12 inches deep in some locations. As reporter Ann Raver noted, "[I]t seemed like a bit of a miracle to see the blue Salvia blooming."

"For me, working with the soil is a way of working through this," Eric T. Fleisher, the Conservancy's director of horticulture, told Raver.

Two years later, renovation of Battery Park's landscape included creation of the 10,000-square-foot Gardens of Remembrance, which was designed by Piet Oudolf, the internationally famous Dutch garden designer, an icon of the "new perennials" landscape movement that reveres natural-looking landscapes.

Oudolf included a blue sage - Salvia verticillata 'Purple Rain' - in one of the 18 gardens comprising the Gardens of Remembrance.

Columbine in Colorado. In the weeks following the Columbine High School Massacre of April 20, 1999, Coloradans began planting perennial columbine (Acquilegia) flowers to remember the 12 students and one teacher killed by two teenage gunmen who also took their own lives.

The Denver Post reported that within 10 days following the tragedy, one local garden center had sold 2,000 packets of columbine seeds whereas it normally would sell only 300 packets a year.

WWI and Flanders Field. The National World War I Museum, which is in Kansas City, Missouri, includes a poppy garden beneath a glass walkway as one of its displays. Each of the 9,000 red corn poppies (Papaver rhoeas) represents 1,000 combat deaths during the war.

Red corn poppies became a symbol of endurance during WWI due to the repeated shelling of Belgium's Flanders Field. Disturbance of the soil plus limestone from destroyed buildings caused poppy seed long dormant in the soil to blossom.

Today, boutonnieres of red poppy blossoms are worn November 11 on Veteran's Day (Remembrance Day in Australia, Britain and Canada) to commemorate all who died or served in combat from WWI to present.

Marigolds and El Día de los Muertos. In Mexico, Central America and many parts of the United States, families often remember their dead by planting marigolds (Tagetes spp.) so they can sprinkle the petals on graves during Day-of-the-Dead ceremonies on November 2.

Marigolds were sacred to the ancient Aztecs, who used the flowers in drinks, medicines, and dyes and in flavoring in foods as well as to honor the departed. Today, as with so many memorial ceremonies, the Day of the Dead affirms the pleasure of living and promotes emotional healing.

Home gardens are ideal places to plant perennials reminding us of important events as well as people and pets we have loved. These memorials may simply be personal —quiet reminders of connections and contexts significant within our own lives.

It is significant that the gardeners of Battery Park were encouraged by the flowering spike of a blue Salvia, because the name Salvia derives from the Latin verb salvere meaning "to heal." Both the ancient Greeks and Romans used Salvias medicinally. In the context of the Twin Towers disaster, Salvias and other plants that survived the explosions offered a different kind of healing — a reminder that life goes on.

Varieties of S. verticallata, such as Purple Rain, are also called Lilac Sage. It is one of the loveliest, hardiest and most floriferous of Salvias, with long-blooming, 36-inch-tall spikes of lavender flowers arising out of basal whorls of mint green foliage that grow to 42 inches wide.

Lilac Sage thrives in U.S. Department of Agriculture cold hardiness zones 5 to 9 and prefers loamy, well-drained soil. It does well in either full sun or partial shade.

Honeybees love Lilac Sage, which means that the plant can help heal landscapes with pollination problems. At Flowers by the Sea, we like to say "Help us help the honeybees" by planting a Lilac Sage. It is a good thing to remember that even the smallest of creatures, with the briefest of lives, help to make the world beautiful. Contact us at FBTS for more information about our plants for pollinators.

The Salvia reglas and S. scordifolias that you sent are wonderful! They're in the ground and looking happy. You guys are a bit pricey (shipping?), but the plants are robust, and their rarity in the trade makes it worth it, as does your sage advice on planting in my particular climate. Too many...
dave sherron
I have made and received 2 orders from FBTS and have been very pleased. They have been nice, big plants and have adapted to the Oklahoma weather nicely. The last shipment was made when the weather was hot and the salvia plants looked liked they would rather have stayed in California but I...
Carol Wycoff
I received my order at the time I was told I would get them. They were good after 7 days in shipping, a little dry but they have be growing just fine. I can't wait to see them bloom.
Carol
Very nice healthy plants arrived at my door. Great packaging to keep them safe. I received emails for taking care of my plants, when they would be shipped and when to expect them. I have beautiful growing salvia that are blooming black and blue already. Extremely happy with this company....
Cathy Stoops
JUST LETTING YOU KNOW THAT I RECEIVED THE SALVIAS I ORDER THE NEXT DAY AFTER YOU SHIPPED THEM. THE NINE PLANTS THAT I ORDER WERE IN GOOD SHAPE PLUS THE FREE ONE THAT YOU GAVE ME.SINCE THEY WERE MOIST I LET THEM REST OVER NIGHT AND PLANTED THEM IN GALLON CANS.THE NEXT DAY AND THEY LOOK GOOD.I...
virginia furtado
Three out of the four salvia plants I ordered were outstanding. The fourth was one I would have never selected at a nursery as it was very mediocre in shape as the top had been lopped off and it wasn't full. I hope it will grow out of it's current sad condition and become a nice plant. Hated to...
Carolyn Rice
Purchased plants as part of \"grew too much\" sale; plants arrived in good condition, and are adjusting well to the new home.
Linus
Having a blast learning about salvias, reviewing, ordering and planting. Being recently retired, Flowers by The Sea has been a great source for the plants and keeps me out of the house... Thank you FBTS... Richard
Richard
Just one day's shipping and my plants were delivered, packed so nicely with loving care. They are just lovely, already with tiny buds just ready to bloom and I am ready to add them to my salvia garden for everyone to see and we all can talk about salvias and our love for them and all other...
Bette Marie Vogan