Salvias Down South: 8 Must-Have Salvias for the Southwest 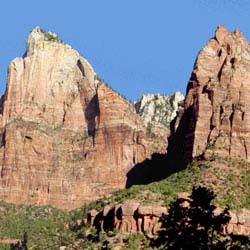 A plant’s toughness in the American Southwest is measured not only by its drought tolerance but also by its ability to withstand the sudden, heavy downpours that arrive during the summer monsoon season.

Fortunately, much of the Southwest’s soil drains well due to its high content of rock and sand. Well-drained soil is one of the few conditions demanded by Salvias that thrive in the Southwest. Defining the Southwest’s boundaries helps in selecting must-have Salvias for the region.

Boundaries, a Broken Dam and Breaking Bad
The boundaries of the American Southwest aren’t precise. Even people who live in the Southwest can get a bit confused about what fits in a map of the Southwest, because its boundaries vary depending on what person or organization is describing the region. Some place its eastern edge at the 98th meridian in South Central Texas, through which the Guadalupe River flows.

The 2002 Canyon Lake flood of the Guadalupe River Valley is an extreme example of wild Texas weather, which historically has swung from flood to drought. A week of torrential rains broke through the Canyon Lake Dam and scoured the land, creating a gorge 23 feet deep and 1.5 miles long. Scientists now study it to gain clues to how ancient megafloods created massive environmental change.

Salvias are tough, but even they have difficulty surviving rampaging rivers that pluck trees out of the ground. But even without flooding, heavy rains can be hard on the landscape. In Texas and the rest of the Southwest, the annual summer monsoon brings erosion as well as much needed moisture.

To get back to the question of the Southwest’s boundaries, most people don’t think of Southern Kansas as the Southwest, yet it appears on some maps as part of the northern boundary along with the Four Corners area where Arizona, Colorado, New Mexico and Utah meet.

For those of you who haven’t lived or traveled in the Southwest, you might remember the Four Corners monument if you watched the fourth season of Breaking Bad on TV. In the episode titled “Cornered,” Skyler tosses a coin on the flat Four Corners monument to see what state it will land in and where she should flee.

Much of the Southwest -- which is typically identified as stretching to the western border of Arizona and south to the U.S./Mexico border – is a similarly dry, wide-open landscape. Long-blooming perennials, such as Autumn Sage and Blue Sage, are welcome splashes of color.

Eight Great Salvias for a Tumultuous Climate
The Southwestern climate is dry and generally hot, but can get cold in mountain areas, such as Flagstaff, Arizona. Despite weather that is often harsh, the Southwest bursts with color -- especially when gardeners orchestrate landscapes of native Salvias.

Here are eight ornamental favorites that Flowers by the Sea recommends for the Southwestern extremes of drought, heat, unexpectedly powerful downpours and occasional chilly weather. All these perennial Salvias are Southwest natives.

For gardening success, give all these must-have plants well-drained soil. Add lots of sunshine, except for Arizona Blue Sage and Cedar Sage, which love partial shade.

Autumn Sage. Although the red-flowered types of Autumn Sage (S. greggii) are most familiar in the Southwest, this species is also available in lively pinks, corals, apricots, oranges, lavenders and purples. Autumn Sage does well in Zones 5 to 10, but needs winter mulching in cold areas. Average growth is 36 inches tall and wide.

Cedar Sage. Scarlet flowers make this short groundcover a standout. It grows about 12 inches tall and wide. Cedar Sage (S. roemeriana) prefers acidic soil, because it is native to the Cedar, Juniper and Oak forests of Arizona, Texas and Northern Mexico. It thrives in Zones 7 to 9.

Lemmon’s Sage. Another native of Southwestern canyon lands is Lemmon’s Sage (S. lemmonii), which has varieties flowering from pink to red. Sometimes it is referred to as a variant of Mountain Sage (S.microphylla). Lemmon's Sage grows well in a wide range of temperatures from Zone 6 to 10 and averages 36 inches tall and wide. For a lovely combination, front a row of Lemmon’s Sage with a border of two unusually short types of Mountain Sage -- Glimmering White and Scorching Pink.

Prairie Sage. Here’s another deep sky blue choice, although a bit duskier than Arizona Blue Sage. Prairie Sage (S. azurea) is an abundant bloomer in Zones 7 to 9. It averages 24 inches tall, but sometimes reaches up to 36 inches. Expect it to spread only about 18 inches, so you may want to mass a number of these plants. Pair it with Scorching Pink Mountain Sage to light up your garden.

Painting in Southwestern Colors
You don’t have to be a fine artist to create a work of beauty in the garden. By selecting hardy, vibrantly colored Salvias that are native to the Southwest and can withstand its weather ranging from sullen heat and drought to raging rainstorms, you become a landscape painter. Need to ask some questions? Please contact us, and we'll help you pick plants for a tough yet colorul garden.