The Not-So-Secret Lives of Honeybees 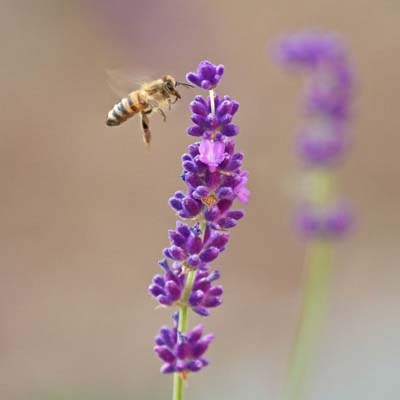 It's no secret that the Western Honeybee ( Apis mellifera) -- the main honeybee species in America -- is crucial to human survival. In collecting pollen and nectar for its own purposes, it helps to pollinate plants that grow many of the foods we love.

Another not-so-secret aspect of understanding these creatures is the dizzying buzz of information about them online due to concerns about honeybee deaths and a mysterious ailment called colony collapse disorder (CCD).

But something that isn't so well known is that many of the threats to A. mellifera are also problems for America's native bee species, which number approximately 4,000, according to the Xerxes Society for Invertebrate Conservation.

That's right. Honeybees aren't native to America or any part of the Western Hemisphere. They originated in Africa, Europe and western Asia. We'll explain how they got here in a bit. But we won't dig into native species until the second article in this Bees in the Garden series about bee basics.

A Bit of Buzz about the Series

Flowers by the Sea believes in sharing information. This series is intended to help gardeners learn more about bees and how to protect them. If we err in some way or leave out a detail that you think should be mentioned, please feel free to post a comment.

This article particularly focuses on why wasps aren't bees and about honeybee characteristics and history. Unlike many wild bees that specialize in pollinating a limited number of plant species, honeybees are generalists that visit many kinds of plants -- a trait that has aided their survival and popularity in agriculture.

Whether you maintain backyard beehives or simply want to attract bees, growing a broad range of flowering plants that bloom in many seasons provides good nutritional support for bees. Salvias and their companion plants, such as Agastache species, tend to be long blooming. Often, they attract honeybees and wild bees. Click here to view a long list of bee plants grown by FBTS.

Subsequent articles in this series talk about:

A Swarm of Confusion
When we hear the word "bee," most of us think of honeybees, which live in social colonies called hives. Or, if we are at a picnic and being pestered by predatory yellow jackets that want our food, we might shout "Bees!" in a panic.

But the world of bees is much bigger than that of honeybees. Also, yellow jackets aren't bees; they are members of the meat-eating wasp family ( Vespidae), which is part of the "super family" Apoidea that encompasses both wasps and bees. Although wasps aren't great pollinators, they are helpful in gardens due to devouring aphids and other insect pests when hamburgers and hot dogs aren't available.

Scientists theorize that, at some point, certain wasps switched to an herbivore diet of nectar and pollen. In the Bee Basics e-booklet published jointly by the Pollinator Partnership and the U.S. Department of Agriculture, biologist Beatriz Moisset and entomologist Stephen Buchmann write, "Pollen is rich in proteins and doesn't fight back, so it is easy to imagine why the bees became vegetarians."

Although wasps, such as yellow jackets, may have banding similar to honeybees, they usually have longer, much less hairy bodies. Some also have tiny "waists" where their thorax and abdomen meet; this is the source of the term "wasp waisted" for people with tiny waists. Although not all wasps are social animals, yellow jackets (various Vespula and Dolichovespula species) are among the kinds that live in colonies.

In contrast to the complex social structure of honeybees and bumblebees, which also live in colonies, many native bee species are referred to as being "solitary." This is because they live in small family groups in the ground or nooks such as hollow plant stems, rock crevices, trees, decaying masonry and wooden structures.

Sweetness and Hard Work of Motherhood
Most wild bee nests are organized by mother bees, but they aren't queen bees, as in honeybee and bumblebee hives, which specialize in laying eggs with the support of thousands of worker bees in colonies.

Lest you think that queen bees are sluggish layabouts compared to the moms of solitary bee nests, consider the queen of an Arctic Bumblebee ( Bombus polaris) colony. As Anne Sutton of the Alaska Department of Fish and Game writes, a B. polaris colony only survives for two months at most. If the colony is lucky, one of its mated females wakes up the following summer as its sole survivor. Before laying eggs, she must buzz around madly gathering food to feed herself and her babies.

The USDA Bee Basics e-booklet says that when an Arctic Bumblebee queen's babies arrive, she warms them by spending hours "vibrating her flight muscles while pressed against her brood cells."

A. mellifera queen bees are prodigious baby makers with colonies of up to 50,000 bees. Managed honeybee hives produce large volumes of honey. They are boxes containing standing frames in which the bees build waxy grids of hexagonal cells into honeycombs. The cells form a nursery for larvae and storage for honey.

Pollen contains protein and fat. Nurse bees -- the only honeybees that can digest pollen -- create jelly-like foods rich in protein and fat for the queen, the brood and forager bees. The process is analogous to the milk production of mammals.

When forage isn't available during cold winter months, adult honeybees eat honey not only to survive but also to produce heat and keep the hive warm. So beekeepers should never remove all of the hive's honey.

Huge populations of managed honeybees are road warriors, because commercial beekeepers rent out truckloads of hives, which travel on flatbed trucks from farm to farm during the growing season.

Not all honeybees come from managed hives. Many feral colonies throughout the U.S. are only distantly related to domesticated bees, because they escaped life in managed hives long ago. However, when honeybees abandon managed hives and turn feral, they colonize hollow tree trunks and unexpected structures.

A Taste of Honeybee Types
According to the Xerxes Society, there are about 20,000 species of bees worldwide. They are divided into four families, all of which aid pollination. The largest family is Apidae, which includes honeybees (Apis and Trigona spp.) and bumblebees (Bombus spp.).

The Apis genus is best known for the Western Honeybee -- the main, managed species used in agriculture. Despite being called "Western," various types of A. mellifera are native to Africa, Europe and western Asia. The appellation differentiates A. mellifera from various species of Asian honeybees, such as the Eastern Honeybee (A. cerana), which is a hive species often raised commercially in China.

Other honey producers include two species from southeast Asia that can't be confined to hives -- the Little Honeybee ( A. florea) and the Giant Honeybee (A. dorsata) -- and, consequently, aren't commercial. Finally, Trigona species are native to parts of Mexico, Central America and South America.

A Dollop of Honeybee History
America is a nation of immigrants, including honeybees. According to retired USDA apiculturalist Everett Oertel's 1980 handbook Beekeeping in the United States, hives of A. mellifera arrived in Virginia in 1622.

By the end of the 18th century, honeybees either swarmed or were carried by human colonists to Alabama, Connecticut, Georgia, Kentucky, Mississippi, New York, North Carolina, Ohio and Pennsylvania. By the early 19th century, Oertel says, Russians brought the first honeybees to Alaska and California.

A few determined pioneers traveled overland with honeybee colonies, but Oertel notes that in the 1850s when honeybees were shipped to California, most traveled by ship via the Panama Canal.

Then, it wasn't long before A. mellifera reached Oregon and Washington either by swarming or traveling in hives that settlers brought with them from California to sweeten their new lives.

A Tad of Advice about Bee Appetites
At FBTS, we're serious about wildlife gardening; we love our pollinators. If you have questions about bee plants in our catalog and how to plan a wildlife garden, we're always glad to share information. So please call or send us an email. The bees will thank you by adding buzz and fertility to your gardens.