Your cart is empty.
You are here    Flowers by the Sea / New at FBTS / Bat-Faced Beauty: Gardeners & Hummingbirds Love Cuphea schumannii... 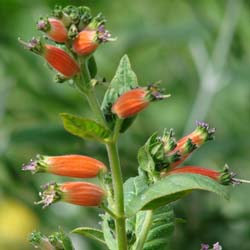 Kermit and crew have always been good about suggesting plants for a particular habitat I've got in mind, and the plants have been well-grown and well-shipped. They've even gone a bit off-list to make a personal grouping selection for me. Their newsletter is very informative and interesting. I'll...
Tony Borowiecki
Plants were large and healthy! I'll be ordering from them again.
Barbara Williams
I have ordered plants from six different nurseries online over the last year (because I am so particular and no one carries everything) but FBTS was by far my favorite. I've received plants from other stores where they cut the plant down to the root ball, but FBTS sent me two healthy plants that...
Billie Jaso
My June order of Bodacious \"Rhythm and Blues' and Salvia microphylla 'Red Velvet' arrived looking great. I potted them up and have them in a shady spot. They are doing very well one of the Red Velvet has buds. I will have to start exposing them to more sun. We live is eastern San Diego and the...
Bruce Cobbledick
This is the third year I have ordered plants from FBTS. All plants have arrived healthy with most blooming plants in bud or bloom. Plants are packed with great care and after a couple days to recover from shipment are ready to be planted. I've gardened for over 50 years and FBTS is without any...
Jan Stedke
I can't say yet how the plants will fare as I just received them, most are in the ground with three having been re-potted to keep thru the winter in the garden shed for planting next spring - but I can say these are by far the BEST quality plants I have ever received via mail order, and in fact...
Sarah Reagan
Very pleased with all the salvias that I have purchased. They are planted in a garden setting and are thriving. The salvias are hardy and are thriving. The service and the quality of plants was exceptional. Will keep returning
Anton T Harris

I ordered black and blue back in April and was exceptionally pleased with the plants and the care taken in the packaging. The plants are thriving here in eastern NC and the hummingbirds love them. Thanks and I will keep you in mind next spring or maybe sooner.

Judy
I ordered an assortment of Mexican Native Salivias. I can report this: I received top quality, large plants that were very well rooted, & pinched back. The plants were well well packaged & delivered exactly as scheduled. No soil jostled, no damaged leaves/stems. I'm impressed.Worth...
markus
The plants we received are excellent in every way. With just a couple of weeks in the ground, there is already a bloom stalk on Mango Popsicle. We couldn't be more pleased. We will definitely recommend you, and have done so on one of the ATP Forums.
Janice Krause
Submit a Testimonial
Read More