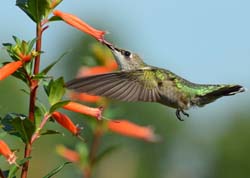 Bright orange, tube-shaped blossoms cover the bush, standing out like tiny windsocks blowing in a breeze and beckoning the Ruby-Throated Hummingbird (Archilochus colubris) in the video. The bird whizzes from one flower to the next, in a dizzying frenzy of gathering nectar from a shrub called Cuphea x 'David Verity'.

Similar to Salvias, Cupheas are rich sources of nectar that fuel hummingbird migration. At Flowers by the Sea, we are always interested in expanding choices for creating wildlife habitat, especially hummingbird gardens. That is why we are growing a wide variety of Cupheas, including David Verity.

Although the tubular calyx is characteristic of all Cupheas, many have noticeable petals. As if tiny firecrackers weren't enough of a gimmick, nature has given many Cupheas improbably cute "faces" at the end of these tubes. Some look like bats or tiny mice when you view the open end of the calyxes.

Cupheas with faces have either two or six rumply petals. Each blossom of Cuphea llavea (Bat-Faced Cuphea) has two crimson petal ears framing the purple opening or snout of its calyx. It's a perfect Halloween flower and, depending on your local climate and other conditions, may bloom in October.

Cultivation and History
Most Cupheas are native to Mexico, Central America, South America and the Caribbean. In the U.S. they grow in USDA Cold Hardiness Zones 8 to 11, with most species agreeable to Zones 9 to 10. Horticultural Cupheas range from sprawling, low-growing groundcovers to bushes up to 6 feet tall. However, most are petite to mid-height species.

Flowers by the Sea grows many kinds of Cupheas that are heat and drought tolerant. However, Cupheas have short tap roots and flourish with regular moisture, so it's a good idea to provide average watering if little rainfall is available. Although known as sun-loving plants, many appreciate a bit of shade where summers are hot and dry.

Botanists estimate there are about 260 species in the Cuphea genus. Here are favorites featured in our catalog.

Trying to Be Hummingbirds and Do Our Part
At Flowers by the Sea, we do our best to create small wildlife habitat and also make resources available to customers who want to do the same. We want to encourage hard-working pollinators, such as honeybees and hummingbirds, because we are committed to growing a better world and know that pollinators are endangered.

A little story about a determined hummingbird goes a long way toward explaining our perspective. In a video you can view here, the late Kenyan environmentalist Wangari Maathai tells a folktale about how a hummingbird doesn't give up when a forest fire begins. It does its best to help put out the fire.

Maathai, started a reforestation movement in her homeland simply by planting a backyard garden with native species and interesting local women to do the same. She concludes her story by saying, "I will be a hummingbird."

Please contact us by email or phone if you have any questions you want to ask about creating a garden for beneficial insects and hummingbirds to enjoy.