Types of Bees Working in Your Garden 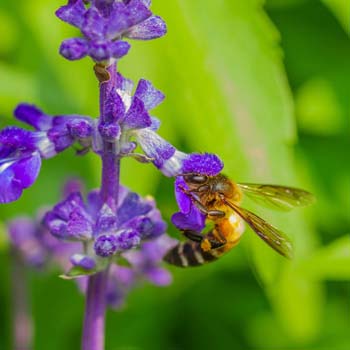 America buzzes with bee diversity. Out of approximately 20,000 species worldwide, we have 4,000 species of native bees as well as many varieties of the nonnative Western Honeybee ( Apis mellifera), which comes from Europe.

As the U.S. Geological Service (USGS) reports in an article celebrating pollinators, bees exist "[w]herever there are insect-pollinated flowering plants." Antarctica is the only continent where there are no bees. This article, which concerns types of honeybees and wild bees, is the second in a Bees in the Garden series about the lives and problems of bees as well as actions gardeners can take to support them.

Value and Variety of Bees
According to the USDA, bee pollination is responsible for about 75 percent of food crops grown in America, including fruits, nuts and vegetables.

A November 2014 report from the Congressional Research Service estimates the value of insect pollination in American agriculture at $16 billion, three-fourths of which it attributes to honeybees. The report calculates the worldwide gain from pollination by all insect pollinators at $190 billion.

The USGS article notes that native bees are particularly important pollinators of native plants, such as blueberries and pumpkins. It adds that wild bees pollinate about 80 percent of flowering plants worldwide.

Yet habitat loss due to development as well as some of our agricultural practices -- including overuse of pesticides and monocropping that limits the variety of pollen and nectar in bee diets -- appear to be key threats to honeybee and wild bee populations. Consequently, these practices threaten agricultural production and home gardens.

Bees are either social -- the kinds that live in colonies (primarily honeybees and bumblebees) -- or solitary types, such as wild bees that form small, family units but sometimes live in large aggregations that don't work cooperatively. Wild bees nest in many surprising places, including the ground, holes in trees, hollow stems, exterior woodwork and cracks in walls.

Observing Bees at Work
During warm, sunny weather when lots of plants are in bloom, it's fascinating to take brief breaks from weeding and planting to watch insect activity in your garden. You may see a greater variety of shapes and colors than expected.

If you observe throughout the day, you're likely to notice bees visiting different flowers at different times of day. Sometimes this is because varying plant species produce nectar at varying times of day.

Also, some bees forage earlier in the day than others. For example, bumblebees and squash bees get to work earlier in the day than honeybees. Pumpkins, which have male and female flowers, are one kind of plant that benefits from this early riser behavior. The female flowers bloom at dawn, close by noon and, overall, don't live long. This limits their access to pollinators and ability to fruit. So the early bee gets the pollen.

For a list of plants grown at Flowers by the Sea that are friendly to many kinds of bees, please click here.

Some Very Busy Bees in Your Garden
Bees are part of the Hymenoptera order of insects and are in super family Apoidea, which also contains wasps. (For more information about wasps, please see the first article in this series, The Not-So-Secret Lives of Honeybees.)

The following list briefly describes four of these families that contribute to agriculture and horticulture in North America. It includes some specific species you may encounter while gardening. A comprehensive worldwide checklist of bee species is available through ITIS.

Detailed illustrations of bees from each family appear in the Bee Basics e-booklet published by the Pollinator Partnership and the U.S. Department of Agriculture.

Family Andrenidae (native)
These are solitary bees that dig tunnels in the ground for nests and are sometimes called digger bees. This activity also explains their other common name of miner bees. You might see miner bees in your Azaleas, apple trees or among blueberry bushes, because they are among the earliest pollinators to emerge in spring.

Family Apidae (native and nonnative)
This is the largest family of bees -- both social and solitary -- and includes many native species as well as nonnatives, such as the Western Honeybee ( A. mellifera).

Bumblebee ( Bombus spp.), social, native. Unlike honeybee colonies, which can survive for multiple years, bumblebee colonies only last one season. However, according to a Penn State Cooperative Extension article about pumpkin pollination, bumblebees are more efficient pollinators than honeybees. One reason why is because bumblebees have big, fuzzy bodies that can carry greater quantities of pollen from one flower to another. In the 1980s, scientists finally succeeded in raising bumblebees for commercial pollination. Similar to honeybees, Bombus species are generalists that pollinate many kinds of plants.

Carpenter Bee ( Xylocopa spp.), solitary, native. Large like bumblebees, carpenter bees are much less fuzzy, mostly black and have shiny lower abdomens. Their common name comes from the female's ability to dig tunnels in wood. Carpenter bees also use their sharp mouth parts to cut, from the outside, into the base of flowers for nectar when the blossoms are too deep for their tongues. When this happens, they don't gather pollen, and the nectar robbing diminishes their value as pollinators. But hey, they're fun to watch in the garden.

Squash Bees ( Peponapis and Xenoglossa spp.), solitary, native. Although small and brownish like honeybees, Squash bees aren't social and are such early risers that they are working by dawn. Similar to the Sunflower Bee, members of these genera are specialists. They depend on the blossoms of plants in the Cucurbitaceae family, such as cucumbers, melons and squash.

Western Honeybees ( A. mellifera spp.), social, nonnative. Among the six main types of honeybees in America, North Carolina State University identifies the European Carnolian bee (A.m. carnica) as one of the most popular kinds in America. This is partly due to what NCSU calls its "explosive spring buildup" that allows Carniolan colonies to begin pollinating earlier than other kinds of honeybee stock. However, mites have become a major killer of American and European honeybee colonies, so many breeders are introducing queen bees from a Russian form of A. mellifera to their hives, because it resists the pests. The Russian stock has no scientific name as yet, but originated from wild honeybees in the Primorsky region of eastern Russia.

Family Halictidae (native)
If a shiny, little green, blue, copper or gold bee lands on you when you are hot and sweaty, don't panic. It's just gathering salt from your perspiration. Bees in this family are known commonly as sweat bees. Mostly solitary, they occasionally form cooperative social units. One species of this family of wild, solitary bees is particularly helpful to farmers in areas with alkaline soil. It's the alkali bee ( Nomia melanderi) and often nests in large groups.

Family Megachilidae (native)
Included among the gentle Megachilidae are Mason bees (Osmia spp.), leaf-cutter bees (Megachile spp.) and orchard bees (Osmia lignaria), all of which are solitary wild species. They are about the same size as honeybees, but their color sometimes is strikingly different as in the shiny blue orchard bee, which farmers foster as a honeybee replacement. Females use mud and leaves to line their nests in wood, hollow twigs or holes in the ground. Megachilidae carry pollen on their stomachs instead of their legs, so that is a significant way to identify them.

Flowers by the Sea -- Also a Busy Family
At Flowers by the Sea, we are usually busy as bees because farming and running a nursery involves a wide range of activities, such as nurturing plants, filling orders, improving facilities, maintaining our catalog and blog, tending our own honeybee hives and stopping to pet numerous farm dogs and cats.

But we're never too busy to consider what we can do to improve the lives of small wildlife, such as providing gardeners with information about pollinators. All bees face tremendous challenges to survival. We'll look at a variety of these problems, including the mysterious colony collapse disorder (CCD), in the third article in this series.

We're also never too busy to answer your questions, so please contact us and keep our email and phone buzzing. We want to hear from you.

Bee-havior for Avoiding Stings
To be afraid or not to be afraid of bee stings? That's the question for many new gardeners as well as experienced ones who want to encourage pollination but react badly to stings.

However, by following some commonsense tips and respecting the workspace, homes and schedules of bees, you can share your garden safely with these usually gentle creatures. Bees sting only in self-defense when they feel threatened.

By workspace, we mean plants and parts of your yard that attract bees. For example, clover in lawns is a major attraction. So watch your step if walking barefoot. Even better, wear shoes! As to identifying bee homes, pay attention if you hear steady buzzing in an unexpected location. Also watch flight paths to see if lots of bees are entering holes in trees, cracks between rocks or other backyard real estate.

By schedule, we refer to the fact that not all bees work at the same times of day. Early in the day is a good time to avoid honeybees when weeding flowerbeds. But watch out for early risers, including bumblebees. Later in the day, when temperatures drop, is also a good choice for limited bee activity.

If you do get stung, immediately scrape the stinger out gently with a fingernail. The longer the stinger remains in your skin, the more your uptake of venom increases. Some additional ideas for avoiding bee stings include:

Bees, in general, are gentle creatures. Solitary wild bees aren't at all aggressive; neither are honeybees if you encounter them away from their hives. Finally, it has to be said that male bees can't sting. Not their fault! They don't have stingers, which are modified egg-laying organs. 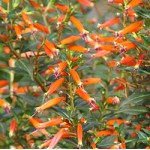