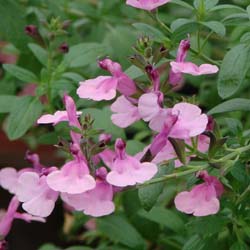 Luminous Salvia x jamensis pastel flowers began warming up nursery catalogs in the late 1990s. Their journey from steep Mexican mountains to American and European gardens began in the mid-19th century with the discovery of Autumn Sage (Salvia greggii).

As the second article in a two-part series about Jame Sages (S. x jamensis), this post helps introduce Cultivating Color, our new, ongoing blog feature about different aspects of color in the Salvia garden. This article is partly based on the observations of the late  Dr. Richard F. Dufresne, an organic chemist and nurseryman who began growing sages in the 1970s.

We lead you up cloudy peaks (please see the sidebar Discovering Pastel Hybrid Sages on Sky Islands) before concluding with a journey through warm pastel Jame Sages in the Flowers by the Sea catalog. This article also takes a brief detour into the valley of maddening confusion (see the section "Will the Real Señorita Leah Please Stand Up") as we consider the question of plant identification when local growing conditions or photographic lighting cause variations in floral color.

Finding Beauty Amid War
Plant collecting presents difficulties. Some are perilous; others are simply frustrating and exhausting.

It was a risky job that led 19th century Santa Fe trader and amateur botanist Josiah Gregg -- a former Tennessean -- to collect native plants in the wilds of Mexico.

Gregg was working for the U.S. Army as a guide and Spanish translator during the Mexican-American War. Aside from observations about combat (Gregg is well known for his description of the Battle of Buena Vista), Gregg's diary contained notes about flora and fauna he encountered in northern Mexico. He collected plant specimens and shipped them to scientist friends back East. That's how Gregg introduced Autumn Sage to commercial cultivation.

Although beautiful and long blooming, Gregg's cheerful sages didn't begin gaining popularity until well over a century later and at least a decade after Dufresne also found himself scribbling furiously about plants in the Mexican state of Coahuila.

Rushing Toward the Swarm
It was 1990, and Dufresne was on an expedition with a plant collection team assembled by Yucca Do Nursery of Texas. This gave him a front row perspective on understanding Autumn Sage, its close relative Mountain Sage ( S. microphylla) and their interaction in creating Jame Sage (Salvia x jamensis).

At the time, John G. Fairey and Carl Schoenfeld shared ownership of Yucca Do and its horticultural introductions, which included some intriguing Autumn/Mountain Sage pastels developed from sages found in Coahuila before the 1990 trip. They were:

The expedition team -- Fairey, Schoenfeld, Dufresne and San Antonio botanist Manuel Flores -- visited so many sites, the chemist recalls, that they had no more than "15 to 30 minutes" to take photographs, write notes and collect plants at each one.

They all drove together from one site to the next. At each stop, Dufresne says, they would rush out of the car to survey the site quickly and collect plants and seed. It was necessary to move fast, he says, because it wasn't wise to be driving the winding, mountain roads after dark.

Sometimes plant exploration is confined to a single biome (an ecologically distinct area), he notes, but often it is more of a start-and-stop touring process traveling through varying terrain.

Compton's team found a swarm, or large group, of S. x jamensis pastel hybrids (see the sidebar Discovering Pastel Hybrid Sages on Sky Islands) in a location where both Autumn and Mountain Sage grew. They eventually introduced a number of cultivars grown from the seed they collected. These included:

Autumn Sage is well known for flowers in the red to blue range whereas Mountain Sage mostly blooms in the red range. As noted in Part I of this series, it's a mystery as to what species contributed yellow to these early warm pastels in the Autumn/Mountain group.

However, Dufresne says, when he and Compton later compared notes about their Coahuila journeys they realized that each had seen a pure yellow-flowered sage -- at a distance and in an inaccessible location -- bearing resemblance to the Autumn/Mountain sages. Yet they didn't have the time, equipment or mountaineering staff to reach the plants.

Identification can even be frustrating when a plant is in your garden.

Will the Real Señorita Leah Please Stand Up
It's confounding that you can't always identify a sage by the color of its flowers. One example is Señorita Leah Autumn Sage, the first American cultivar developed from the warm pastel hybrids that Yucca Do collected.

Due to uncertainty about the exact parentage of all three plants, some nurseries refer to them as S. greggii species and others call them S. x jamensis cultivars.

According to their 2012 book Bulbs in the Basement, Geraniums on the Windowsill, the McGowans named the plant for their daughter, Leah, who was studying Spanish at the time. They describe it as having "large, clear pink flowers that shade to softer peach tones."

Dufresne gained his Señorita Leah from the McGowans and we gained ours from Dufresne. Yet if you compare our photos of the flower with one from his garden, they look different. Dufresne's cultivar is pink to rosy peach. Our plant doesn't fit the peachy tones evident in his photo or in the McGowans' description.

We've noticed that, aside from images being affected by changes in lighting, this particular sage is one in which flower color varies significantly based on growing conditions and time of year. In one of our photos Leah appears hot pink with a reddish throat; in another, it's pale pink with a hot pink throat. Then there is also the confusing photo from Dyson's Nursery in England, which shows a pink and yellow translation of Señorita Leah. However, many sages have changeable colors under varying conditions of soil chemistry, sunlight, moisture and season.

Not to get too scientific, but neither pigment analysis nor molecular analysis -- which includes DNA testing -- are entirely reliable for identifying a sage's family history. With apologies to Jane Austen, it is a truth, not always universally acknowledged, that a single plant in possession of great beauty must be in want of good provenance. So make sure you maintain records and trust the source of your plant (we do).

It's also important to note that plants in the Autumn/Mountain Sage group cross readily. It's a good idea to maintain a garden map showing where you planted original stock in case surprises germinate.

Sunny Jame Sages from Our Catalog
Although originally from high altitudes, Jame Sages are adaptable to lower elevations similar to their parent plants Autumn and Mountain Sage.

Overall, plants in the Autumn and Mountain Sage group are pleasantly fragrant when you pass your hand over foliage or crush a few leaves. Speaking of foliage, some have tiny, smooth, elliptical leaves like those of Autumn Sage. Others look a bit more like Mountain Sage with larger, veined leaves that are glossy and have serrated edges.

The species in this group are known for their heat tolerance and long off-and-on bloom from spring to fall. They like average watering based on local conditions yet tolerate drought. Pollinators are drawn to their nectar and pollen, so they are good choices for wildlife gardens as well as dry gardens that receive little supplemental watering once established. Too much watering can decrease bloom.

Not all S. x jamensis are pastels or warm colors as evidenced by the hot tomato red and soft blue-range choices among the hybrids created at Flowers by the Sea (FBTS), which are called Elk Rainbow Sages. However, in line with this article, here are some of the warm pastels grown at Flowers by the Sea on Northern California's Mendocino coast.

Questions about Planning for Color in Your Garden
Flowers by the Sea grows a broad range of Salvias and companion plants ranging from hot reds and oranges to chilly blues and purples. Whether you want brights or pastels for your garden, we have them, including many sunny choices. We also have plenty of friendly advice to share about garden planning, so please feel free to contact us.

When varieties of the two species meet, wonderful, colorful surprises occur. These include pastel Jame Sage hybrids ( S. x jamensis spp.), which were first discovered on the ridges of closely spaced mountains in the 11 Sisters area of the northeastern Mexican state of Coahuila.

Dr. Richard F. Dufresne in 1990 visited the area when invited to participate in a Coahuila plant expedition with Texans John G. Fairey and Carl Schoenfeld of the famous Yucca Do Nursery. Fairey and Schoenfeld had already introduced three pastel Autumn/Mountain Sage hybrids found in Coahuila, including the famous Sierra San Antonio Sage that would eventually be referred to as an S. x jamensis.

In 1991, Fairey and Schoenfeld explored the 11 Sisters area with botanist Dr. James Compton who headed a British team of plant collectors. Compton is credited with discovering a large group, or swarm, of Autumn/Mountain Sage hybrids, which he named S. x jamensis for the nearby Jame agricultural valley.

Dufresne noted that Compton found the swarm along or near a roadside on a "sky island," a steep mountain with plant life isolated from surrounding mountains and valleys.

Here is how Dufresne described the native area of S. x jamensis and the occurrence of these hybrids.

The pastel sages are in the sky islands of the ridges. This is like an archipelago, where the upper elevations are their own biosphere or mini biome, so to speak. The lower valleys in the ridges keep the mini biomes separated most of the time, with occasional crossing of [plant] species promoted by storms and other weather and climatic events. They reunite with their long-lost cousins occasionally over a long time scale, adding to the biodiversity.

Nothing much happens in the big, wide central plateau except for desert species. The valleys in the 11 Sisters area act like the channels in the archipelago.

The sky island effect also takes place in the Sierra Madre Occidental and other Mexican mountain ranges, but not quite so dramatically. This contributes a lot to the rich personalities of these mountains.

It is often said that around every turn on a Mexican mountain road, you will find different plants. The archipelago of sky islands is the primary reason, but changes in rain patterns, rising and falling elevations, changes in soil type, and the direction of exposure to the sun all add to the changing variety.

Wind and animals are well known for causing plant seeds and pollen to spread . Dufresne says that native inhabitants of the Southwest and Mexico also likely contributed to the distribution of a wide variety of Salvias for centuries, especially the Autumn/Mountain Sage group. Perhaps ancient cultures also appreciated the beauty of these plants and were willing to carry them from one homesite to another.

Nowadays, commercial popularity of these species and their hybrids are spreading the roots of this plant group worldwide.

While you study the Jame Sages that have taken root in the online catalog at FBTS, here's a spicy Latin-fusion composition titled Sky Islands to enjoy. It includes vocals by award-winning jazz artist Dianne Reeves.