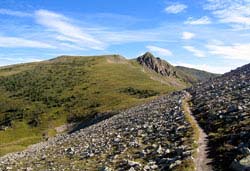 Winter temperatures can drop to -20 F in USDA plant hardiness Zone 5, which is death to most Salvias. However, Salvia greggii 'Cold Hardy Pink' is an Autumn Sage that knows how to button up and make it through chilly winters, such as those of Rocky Mountain cities including Santa Fe and Denver.

Few varieties of Autumn Sage can take temperatures colder than those of Zone 6 even when blanketed with winter mulch. However, instead of dropping dead during deep frost, Cold Hardy Pink survives season after season to show off its drop-dead good looks. These include deep red bracts cupping hot pink flowers with a touch of creamy pink at the throat.

Autumn Sage blooms from late spring through fall. To decrease woody, lanky growth and to encourage repeated flowering, it's a good idea to trim about a third of the plant's height at the end of winter, spring and summer.

North Texas Beauty
All Autumn Sages thrive in semi-arid mountainous settings -- they are native to Northern Mexico and Texas -- as well as more humid coastal areas. Cold Hardy Pink hails from Northern Texas. Similar to other varieties of the species, it loves full sun, stands up to heat and can tolerate drought. All prefer regular watering and a bit of shade during extreme hot spells.

At only 24 inches tall and wide, this variety is an excellent choice as a fragrant, perennial groundcover. For a striking perennial border, mix it with the similarly cold hardy Ultra Violet Hybrid Sage (S. lycioides x greggii 'Ultra Violet').

Plant any Autumn Sage, and you help create habitat for small wildlife. The bright colors of the species' flowers and its nectar attract butterflies and hummingbirds. It appears to be the powerfully fragrant chemicals in the foliage that keep deer away.

Although S. greggii entered cultivation in 1885, it took 100 years to become a garden staple and to develop its current rainbow of colors. Now the species is one of the most popular and varied landscaping sages in the world. For more information about Cold Hardy Pink and other varieties of Autumn Sage, please contact us today.