Your cart is empty.
You are here    Flowers by the Sea / / Plant Safari Salvia in the South African Fynbos -- Part 1... 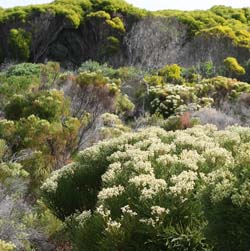 Twenty-six species of Salvia are native to South Africa and of these, 10 grow nowhere else in the world, according to the South African National Biodiversity Institute. SANBI keeps track of the nation's Red List of endangered species, which shows that, so far, the environmental threat to these hardy plants is present but low.

Salvias play an important role in providing wildlife habitat and food as well as brightening the semi-arid landscape of the Western Cape province of South Africa. Some are used in cooking or provide material for herbal remedies used in the alternative medicines taken by many South Africans. Scientific research is beginning to validate the medical qualities and possibilities of a number of these sages, which include:

All are familiar species in South Africa's scrubby Fynbos (pronounced 'fin boze' and meaning 'fine bush') Biome, which dominates the Western Cape Province surrounding the coastal city of Cape Town. It is a large portion of one of the most botanically rich places in the world called the Cape Floristic Region (CFR). The CFR is mostly found in the Western Cape Province, but includes a bit of the adjoining province called the Eastern Cape.

Estimates vary, but about 1,500 to 2,200 of the CFR native species are endemic to Cape Town's iconic backdrop, Table Mountain, which gains its name from a 2-mile-long plateau over which clouds drop like a tablecloth.

To put the mountain's number of native plants in perspective, consider that California -- roughly one-third the size of South Africa -- has about 4,200 native species. How many of the California species are endemic is uncertain -- at least within our research. However, the Cape's voluminous number of endemic species, especially ones showing medical promise, is what gained it a World Heritage Site classification in 2004.

A Medicine Cabinet of Possibilities
The South African plant biodiversity figures are a statistical stunner. They can leave you feeling dazed, especially when you consider the health-giving possibilities of many of these plants. A 2012 study, published in the journal BMC Complementary and Alternative Medicine, reports that 3,000 of South Africa's native plant species are used as medicines in that country. The study focuses on the uses of various fynbos plants, including S. africana lutea, for treating microbial infections, including MRSA and tuberculosis.

The Zandvlei Trust, which manages one of the Western Cape's many nature preserves, notes that up to 80 percent of the nation's population "rely on herbal medicines for healthcare." Consequently, Western medical research is scurrying to explore the possibilities of these plants, especially for treating chronic illnesses.

Floristic Regions and Mediterranean Climates
Some refer to the CFR as a botanical 'kingdom.' Scientists divide the world into six floristic regions or kingdoms based on similarities within those areas concerning the types of plants they contain.

The largest of these kingdoms is the Boreal Floristic Region (BFR) encompassing North America, Europe, northern and central Asia, and North Africa. The smallest is South Africa's CFR, which has growing conditions remarkably similar to those in our tiny community of Elk on Northern California's Mendocino coast, even though we are part of the huge BFR. So parts of one floristic region may actually have growing conditions comparable to those in parts of another.

For example, there are five temperate areas of the world referred to as having a Mediterranean climate. These include Australia, Chile, the Mediterranean Basin, the Western Cape Province of South Africa and a stretch of North America from the top of Mexico's Baja Peninsula up along the California coast into parts of British Columbia.

Aside from many countries bordering the Mediterranean Sea, this mild climate is found on the coastal, western edges of continents. Although these areas generally occur at latitudes from 30 degrees to 40 degrees north or south of the equator, Vancouver, British Columbia, is sometimes referred to as having Mediterranean conditions despite being 49 degrees north.

Two major characteristics of Mediterranean climates are wet winters and dry summers, which describes the conditions at Flowers by the Sea with a latitude about 39 degrees north.

However, according to the Pacific Bulb Society, we receive just a little less moisture during our Northern Hemisphere summer than the Western Cape does during its Southern Hemisphere Summer. Plus, we share winter temperatures generally no lower than 40 degrees F. That is one reason why South African Salvias grow so well for us.

We talk more about fynbos Salvias in Part 2 of this post and touch on problems facing South African plants and wildlife. Meanwhile, click here for more information about African Salvias or contact us. We're glad to answer any questions you may have.

Can't say enough about FBTS. What a great resource. I have a salvia/cuphea garden for birds and bees in my front yard and have landscaped the back yard with many companion plants all from FBTS. All plants arrived healthy and have thrived with planting. You just can't get this variety anywhere...
Shotsy Faust

Gary Harkness
I ordered 25 plants in two separate orders. They arrived quickly and in great condition. Don't be put off by the small size of the pots (3.5\"), as the plants are large and healthy, more like 1 gallon size plants you'd get from your local nursery. In only a couple of weeks, several of the salvias...
Mike Belcher
Excellent all the way around, from the variety of plants to the service to the size of the plants that arrive.
Dean Sliger
I love the salvia's that I received! They were beautiful, healthy and in-bloom. I will buy more in the future.
Daphne
This is my second year ordering from this fine nursery. The plants are large and healthy, and the choices are spectacular! They were very well packed and shipping was very quick.
PS

Cj Brander
Yesterday my order of 6 salvias arrived. Up until then I had considered the plants I got from Annie's Annuals and Perennials this year to have been the best of many mail orders. Now, I must revise my opinion and give the first ;prize to Flowers by the Sea!. All the plants were meticulously...
Robert Beissel
This is my third year I have ordered from Flowers by the Sea. I have received nice sized plants in very good condition. Every single one of the plants have flourished. Nice selection too.
Linda
Kermit and crew have always been good about suggesting plants for a particular habitat I've got in mind, and the plants have been well-grown and well-shipped. They've even gone a bit off-list to make a personal grouping selection for me. Their newsletter is very informative and interesting. I'll...
Tony Borowiecki
Submit a Testimonial
Read More