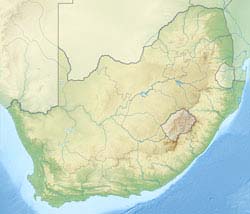 Flowers by the Sea is a home away from home for a number of South African Salvias that enjoy our moderate, Mediterranean climate. None are endangered species, but all face the threat of land development in the Western Cape’s Fynbos Biome -- unparalleled for its variety of native plants found nowhere else -- which surrounds and encompasses the nation's largest city, Cape Town.

The world's lands are divided into six distinct floristic regions based on the kinds of plants they support. The Fynbos Biome, which we talk about in-depth in Part I of this series, is one of a number of biomes in the Cape Floristic Region (CFR) -- the world's smallest yet most botanically rich floristic region.

Balancing Biodiversity and Development
Preservationists in South African government, the science community, local citizenry and throughout the world are working together to balance changes in land use and to maintain biodiversity in the Fynbos Biome and the greater CFR.

The Fynbos Biome primarily encompasses two kinds of land -- sandy scrublands and shrubby grasslands with richer soils that were developed for agricultural use over the past 200 years.

The scrub area, which is similar to the semi-arid chaparral of Southern California, is called fynbos -- Afrikaans for 'fine bush.' The farmlands are renosterveld, which means 'rhinoceros grassland.' Both were once home to rhinoceroses and other large game mammals native to Africa. Now the only rhinos to be found in the Fynbos Biome live on private game reserves, some of which offer eco-safaris instead of big game hunting.

We like to imagine that Salvias are among the delectable scrub plants favored by rhinos. Salvias certainly would be more tender fare than the dominant, tough-leafed Renosterbos (Elyotropappus rhinocerotis) -- also called Rhinoceros Bush -- eaten only by the giant vegetarians after which it is named. Not to malign such a hardy survivor, but it's the Salvias that we grow in our gardens.

Scrubby, Scrappy, Useful, Lovely Salvias
Okay, please excuse the over-the-top subhead, but we adore the Salvia genus and particularly admire the hardihood, usefulness and adaptability of our South African species. Although native to the hot, dry fynbos and renosterveld of the Western Cape, they grow well on our cooler, moister, coastal farm in Northern California.

All five plants have a long history in folk medicine practiced by South Africa's alternative healers. They are the subject of ongoing medical research concerning their potential for treatment of serious diseases and chronic conditions. Here are just a few examples of their potential:

However, these Salvias aren't just powerful; they're pretty and tasty as well. All are used as culinary herbs in their home country and are attractive additions to a kitchen garden.

Cultivating South African Beauty
South Africa is a small country, but a land of many climates and microclimates. Consequently, cold hardiness varies for the Salvias detailed here despite the fact that all are drought resistant, love full sun and live in the Western Cape. So please note their USDA cold hardiness zones.

If you want to try growing any Salvia in an area that is one zone colder than its reported range -- such as planting Blousalie in Zone 7 -- remember to winter mulch it. Conversely, if you live in Zone 10 and want to grow White Stem Sage, locate it where a bit of partial shade will cool it during hot summer afternoons. Then, please share the results with us.

Blue African Sage or Blousalie (Salvia africana-caerulea) Zones 8 to 11.
Green and red leaf-like bracts form a trumpet-shaped base holding each large, pale blue flower of this sage, which blooms from spring through summer. A plant of the Cape Flats fynbos surrounding Cape Town and of the areas hill country, it grows well in sandy and rocky soils, reaching up to 48 inches tall. It's just right for a shrubby border.

Kirstenbosch Golden Sage (Salvia africana-lutea 'Kirstenbosch') Zones 9 to 11.
S. africana-lutea is yellow flowered, but its blossoms eventually transform to a rusty brown, which is why so many South Africans call it Brown Sage. The foliage is wooly gray-green. Kirstenbosch Golden Sage is almost identical to its parent species, but grows bigger and is more vigorous. It was developed by the staff at the Western Cape's famed Kirstenbosch National Botanical Garden, which is in Table Mountain National Park.

White Stem Sage (Salvia albicaulis) Zones 8 to 9.
Felted white stems, leathery green foliage and flower spikes blooming with clusters of violet blossoms from summer into fall make this an eye-catching garden plant. Fragrant and only about 18 inches tall, it forms an appealing groundcover.

Preserving Plants and Wildlife
The Cape Town government encourages its citizens to plant native shrubs, such as S. africana lutea, in their home gardens to maintain native flora and provide food and cover for small wildlife, including Cape Sugarbirds (Promerops cafer) with hummingbird-like beaks.

Preserving the nation and the world's dangerously small herds of rhinos is far more daunting. Similar to large wildlife in other parts of the world, rhinos have lost ground throughout Africa and Asia to increasing urban and farm development.

Even more deadly, poaching of rhinos has risen sharply in recent years due to demand for their horns. Far too many people, especially in Asia, mistakenly believe that ground-up keratin protein from the horns can ward off cancer and other health problems. The mutilated rhinos usually die or can no longer care for their young. One recent preservation effort has involved building an orphanage for baby rhinos that have lost their mothers.

Call or email us if you would like more information about South African Salvias. Plant one and you help friends and family become more aware of the amazing biodiversity of a tiny, yet hugely important floral kingdom.