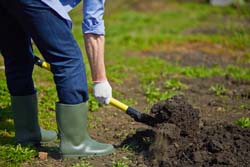 This is the fifth article in our Quick Digs series about getting ready for spring in Salvia gardens. The previous post talked about spring weeding and planting Salvias for weed control. Now we dig into soil.

Amendments aren't just additions to legal documents. The word also refers to materials added to soil to break it up and improve its chemistry.

Soil amendments include organic matter, such as compost, as well as chemical fertilizers and minerals (lime and crushed rock are examples). The supplements you choose will depend on the plants you want to grow and the current make-up of your garden soil.

Getting Gritty in the Salvia Garden

If you plant a Southwestern garden of cacti, sages and succulents in an area with rich, loamy soil, you need to amend the ground to mimic dry, alkaline, desert conditions. This requires adding rocky grit and forgoing fertilizer except for organic matter, which breaks up soil for better aeration and drainage as well as enriching it. The reverse process is true if you live in a semi-arid climate and want to grow loam-loving plants.

Plants of the Southwest and hot, dry parts of the South, bloom better in soils with limited amounts of nitrogen, potassium and phosphorus -- the big three of bagged fertilizers. These are called low-fertility soils and are also the kind usually needed by wildflowers in meadows. So low fertility doesn't necessarily equal low floral growth.

Many sages, including Salvia fruticosa, are adaptable to a broader range of conditions than those of their native lands. Although rich soil may not improve their flowering, it usually doesn't harm them.

However, be aware that if you give too much nitrogen and water to a sage from a harsh environment -- such as Cedros Island Sage (S. cedrosensis) -- the result usually is rampant foliage and reduced blossoming.

One thing that most sages require is excellent drainage so roots don't drown or rot in persistently damp soil. Although gritty amendments help drainage and may be sufficient for desert-type plants, organic matter is a supplement that is beneficial to nearly all sages.

Bark mulch, used coffee grounds and compost are examples of organic matter. Compost is a well-rotted combination of nitrogenous materials -- including vegetable scraps and grass cuttings -- and carbon-rich debris, such as autumn leaf mold. These amendments break up soil so roots can breathe easily, stretch out and absorb moisture but not be bathed in it.

Not all types of organic matter should be added directly to soil for all types of sages. A plant that needs rich soil may not get enough nitrogen if you dig used coffee grounds or bark mulch directly into the soil. These are materials that use lots of nitrogen during their decomposition. So it's best to let them break down in compost before applying them to a flowerbed containing sages needing rich soil.

In contrast, adding intact bark mulch or coffee grounds to soil where you intend to grow plants from the Autumn Sage (S. greggii) and Mountain Sage (S. microphylla) group, is unlikely to harm their nutritional needs, because they require less nitrogen than plants such as Tropical Sage (S. coccinea).

By the way, although coffee is acidic, used coffee grounds aren't. The brewing process leaches out all the acid, which means that you don't have to worry about used grounds adversely affecting sages that prefer alkaline soil.

Some soils, such as heavy clays, can be particularly difficult for drainage. Building raised garden beds atop amended soil may be the solution. The frames can be made of a variety of materials, including wood, bricks, stone or hay bales. Or they can be mounds without frames.

One key to success is to fill the frames or mounds with a loamy soil or a loose, gritty soil, depending on the needs of the plants that will occupy the bed. This way you can give your Salvias a head start of 18 to 24 inches of excellent drainage before their roots reach the more difficult soil.

Whatever kinds of Salvias you would like to grow, we can answer any questions you may have about the conditions they need for success, including soil composition. Please call or write to us at Flowers by the Sea, our family farm on the Northern California coast where we raise all the beautiful sages listed in our online catalog. We'll be glad to dig into any Salvia subject with you.