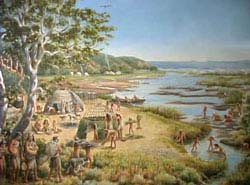 Similar to White Sage (S. apiana), Black Sage is an important source of food and habitat for wildlife. Birds and small mammals enjoy its seeds. Butterflies and hummingbirds are drawn to its nectar. Furthermore, scientists turn to Black Sage as a monitor of air pollution, because it suffers when ozone and sulfur dioxide levels increase.

Less than 250 years ago, Black Sage and White Sage also helped feed and heal the Tongvas and other Southern California native peoples.

Decline of the Tongvas
When Spanish missionaries began establishing settlements in Southern California in the 1770s, one of the largest and most powerful tribes they encountered was the Tongva, a peaceful group of Indian hunter-gatherers who lived in thatched huts and fished in the ocean.

It is estimated that, at the time, 5,000 Tongva lived in what is now Los Angeles as well as parts of Orange County, San Bernardino County and the Southern Channel Islands, including Catalina. The Public Broadcasting System notes that altogether, there were 300,000 native peoples living in what would become California. By 1900, PBS says, only 16,000 California Indians were left due to genocide and disease.

By the time the Spanish missionaries arrived in 1771, the Tongvas already had developed a monotheistic religion. This likely made it easier for the Spaniards to convert many to Christianity, after which the Spaniards forced the converts to leave their villages and live at Mission San Gabriel. The mission is just east of L.A. and west of the San Gabriel Mountains. Over time, the Tongvas and parts of other local tribes, including the Chumash, became known as the Gabrielenos. Both names are still used today.

Some historians say that the Tongva and other Southern California tribes didn’t plant crops until they learned about farming during their enforced labor at Spanish missions, such as Mission San Gabriel. It's true that as a hunting and gathering culture, they had cultivated and weeded existing plants for millennia. However, in her academic paper Through a Glass Darkly, Dr. Deborah W. Dozier of San Diego's Palomar College Department of American Indian Studies and American Studies reports that Spanish conquerors benefited from tribal knowledge about "intensive gardening and harvesting" of natural foods.

PBS notes that due to a state policy opposed to establishing reservations for tribes, many speakers of native languages lost contact with other tribal members and had no one with whom to speak their language. In 1970, the last native speaker of the Tongva language died.

Sage and Cultural Reclamation
In its series “Revitalizing Native Cultures,” PBS recounts the story of Mark Acuña, an ethnobotanist and educator who had assumed that the Tongva tribe from which his family descended was extinct and its cultural practices dead.

Acuña was 50 years old when he heard a Tongva woman speak about the tribe’s medicinal plants. He was ready to argue with her about the validity of the information until he realized that all the plants she mentioned were ones his grandfather had raised in his garden. When the professor discussed this with his father, the elder Acuña pulled out an abalone shell, filled it with sage, then lit it and blessed his son.

“I just fell apart,” PBS reported Acuña as saying. His dad explained that the family had gone underground culturally and didn’t share their ancestry with him in hopes that he would succeed in white culture.

The younger Acuña began seeking sources of information not only concerning his tribe’s plant lore but about its language, which he thought had disappeared. Based on archived documents, he began reconstructing the language, spreading word about the culture and shifting his ethnobotany focus to traditional Tongva plants, including Black Sage and White Sage (Salvia apiana).

Tongva Native Plant Garden
Tiny Pitzer College, which focuses on environmental education and is one of the private Claremont Colleges in Southern California, is home to the Tongva Native Garden. Acuña helped Pitzer’s staff and students identify the garden’s 23 species – the ones most important to the Tongva tribe’s life in the coastal sage scrub and foothills chaparral ecosystems. The plants include Black Sage and White Sage.

The garden’s species are important for their links to Tongva culinary, medical, and practical arts – such as basketweaving – as well as spiritual beliefs. The Tongvas ate the leaves and seeds of Black Sage and White Sage. They used Black Sage seeds to flavor fish, meat and poultry. The seeds of both plants were ground into meal.

The Tongvas called both Black Sage and White Sage “Kasili” and relied on them to soothe a number of health problems. They heated Black Sage leaves to apply topically to earaches and sore throats. Medical uses of White Sage included teas for treating common cold symptoms, stomach problems and canker sores.

For spiritual purification, the Tongva included Black Sage leaves with those of White Sage when making smudge sticks. Smudging is a process of anointing people and places with the aromatic smoke of sages to cleanse them of bad associations, worry and stress.

Black and White Sage in the Home Garden
Like salt and pepper, White Sage and Black Sage are partners. Although their homelands are Southern California’s coastal sage and chaparral, they can be grown elsewhere in U.S.D.A. plant hardiness zones 8 to 11. Both need full sun and well-drained soil.

If planting the two species together, remember that Black Sage usually is the taller plant and grows more quickly. It generally rises up to 48 inches versus an average of 36 inches for White Sage. However, both can reach heights of 60 inches.

Together, they share a great backstory. By planting them, you help wildlife as well as the peaceable Tongva culture to endure.


If you have any questions about California native sages or wildlife gardening, please call or email us at Flowers by the Sea. We're glad to share what we know.