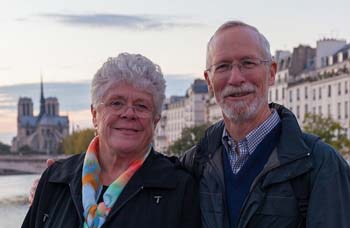 Love of gardening is partly about love of nurturance. Some gardeners nurture far more than their home landscapes; that's the case with Richard and Bracey Tiede.

Update 2018: The Salvia community continues to grieve the loss of Bracey Tiede to a painful battle with cancer on February 15, 2018. Bracey was a major advocate for sustainable, drought resistant landscaping through her work with organizations such as the Master Gardeners of Santa Clara, the Mediterranean Garden Society, and San Jose's Guadalupe River Park Conservancy.

The Tiedes have nurtured gardeners, the Salvia community, and knowledge about drought-resistant planting in and beyond their home county of Santa Clara, California. They do this through volunteerism as avid as their love of gardening.

The Tiedes both are retired from high tech positions in Silicon Valley companies. Richard worked in electrical, hardware and mechanical design whereas Bracey was in software. Long before retirement, they began gardening, an activity that Megatrends author John Naisbitt in the 1980s identified as being among the "high touch" humanizing pastimes that would counterbalance life in what was then becoming known as the digital "information age."

So the Tiedes are high-tech, high-touch folks whose volunteerism merges the two worlds. They've adapted their knowledge of digital technology, business management and xeric gardening to the needs of many garden organizations while also developing their own gardens as examples of sustainable landscaping.

Growing Up Rooted in Agriculture
To paraphrase the opening of Maine songwriter David Mallett's famous Garden Song, "inch by inch, row by row," organization by organization and public garden by public garden, the Tiedes are making better gardening grow.

Richard Tiede's own gardening roots come from his parents, who grew up on working farms in Iowa. Perhaps his inclination toward sharing information came from his father who became a teacher for Detroit Public Schools. As a child in Michigan, his gardening education began with weeding the family's vegetable garden.

It was his mother who encouraged Tiede's interest in ornamental plants. He recalls that it was her native plant garden near the house that made him "appreciate" flowers as well as edible plants.

When he met his wife many years later and they purchased their first home, Richard Tiede recalls, "We killed the lawn, removed the juniper shrubbery, started a veggie garden and started looking for interesting plants."

Discovering Salvias in Garlic Country
To understand the Tiedes' impact on horticulture, it helps to consider their journey as volunteers. It began with a search for information about what kinds of plants would grow well at their home on the often hot and dry slopes of Santa Clara County's foothills east of San Jose.

In the early 1990s, the Tiedes began volunteering with the Saratoga Horticultural Research Foundation (SHRF), which is located in the southern Santa Clara County agricultural community of San Martin -- garlic and wine country.

Water-conserving sages that the Tiedes discovered through SHRF and which still thrive in their home gardens include Graham's Sage ( Salvia grahamii) and Mexican Bush Sage (S. leucantha).

Over time, they became "hooked on Salvias," Richard Tiede says, and experimented with 140 varieties to find plants such as Cleveland Sage (S. clevelandii spp.) and Hummingbird Sage (S. spathacea spp.) that could deal with their shortage of water and shade.

He adds that aside from new plants, they became acquainted with many "plants people" including members of California's Western Horticultural Society (WHS). This is how they met Betsy Clebsch, author of The New Book of Salvias and one of the most important influences on their home landscape.

The plants people also included many graduates of master gardening, a nationwide program that had a major impact on the Tiedes' retirement.

Becoming Master Gardeners
The nationwide master gardening movement focuses on botanical education and volunteerism. It's programs are administered through the agricultural extension offices of public higher education institutions, such as the University of California.

In 1999, Bracey Tiede completed training through the University of California Master Gardener Program . Her volunteer jobs involved managing a hotline for home gardeners and leading a web team that created the Master Gardeners of Santa Clara website. She currently supports the program by chairing its nonprofit Friends organization that raises funds for the program.

Twelve years after completing her training, she succeeded in recruiting her husband to take master gardener training. As a master gardener, Richard Tiede currently helps with the local master gardener hotline for calls about problems or informational needs related to gardening. He also volunteers time in an historical garden maintained by the local nonprofit History San Jose.

Yet like a flowerbud unfurling, the Tiede's involvement in master gardening is just a glimpse of their volunteerism in full bloom. Similar to many a vigorous Salvia shrub, they have spread the roots of their avocation mightily.

Volunteering on a Grand Scale
These days, Richard Tiede is a former president of WHS, which was founded in 1963 and provides educational opportunities for a membership including avid home gardeners, botanists, horticulturists, landscape designers, nursery owners and students.

Dig into the WHS website or view pictures of the Tiedes' world travels and you'll discover that Richard Tiede is an avid horticultural photographer. He's also enthusiastic about participating in organizations and projects to which his wife lends her managerial abilities.

For example, Bracey Tiede was volunteer director of San Jose's Guadalupe River Park Conservancy for seven years. Now, they both volunteer at this 3-mile-long urban park running through the heart of San Jose, a city of nearly 1 million residents south of San Francisco Bay. They work in its Heritage Rose Garden, which features thousands of heirloom species, as well as its Historic Orchard and other gardens.

Together, the Tiedes also helped the California Native Plant Society and a master gardener team to create the free Going Native Garden Tour in Santa Clara and San Mateo counties. The tour has become a two-day event involving dozens of gardens.

But we're nowhere near done here with the Tiede's volunteer commitments in the world of gardening.

Garden groups from British Columbia to San Diego eventually joined PHS to make it one of the West Coast's most powerful voices in gardening through its events, tours, website, electronic newsletter and social media accounts. It has what digital folks call "reach."

In addition, Bracey Tiede heads the Northern California Chapter of the Mediterranean Garden Society . It is an organization that helps educate gardeners about attractive plants for drought-resistant landscaping.

MGS was founded in Greece in 1994. It offers branch activities, including garden tours, as well as a seed exchange, journal, online member forum and book reviews.

Where the Tiedes live, summers are dry and winters are supposed to be wet, because coastal California has a Mediterranean-type climate. However, due to a number of years with little winter rain or mountain snows, California has become a testing ground for xeriscape -- the art of low-water gardening.

Nevertheless, the Tiede's home landscape is abundant with food and flowers, including 80 varieties of Salvias providing bursts of red, blue, purple and yellow -- the colors that best tolerate their sunny yard. In recent years, they have narrowed their choices to California native sages as well ones from around the Mediterranean Sea and Turkey.

Raising an Orchard, Traveling and Experimenting
When not volunteering, the Tiedes are often working in their own gardens or traveling abroad and viewing gardens in other countries. They describe their foothills home as having a "banana belt" climate. With its southern exposure and 300-foot altitude, it is warmer than the flat lands nearby.

Although some plants that prefer moderate winter temperatures may need protection from rare cold snaps, their gardens are hospitable to plants adapted to USDA Cold Hardiness Zones 9B to 10, including a number of orchard trees. Edible plantings include Asian pear, blood orange, fig, kumquat, lemon, lime, and Mandarin orange.

Traveling with a variety of groups, including friends from the Mediterranean Garden Society, the Tiedes have visited gardens in Australia, Borneo, Canada, England, France, Greece, Hawaii, Italy, Mexico, Monaco, Morocco, New Zealand, Singapore, and throughout the U.S.

At home, Richard Tiede likes to experiment with hand pollinating and hybridizing plants. "I got tired of waiting for bees to [pollinate], so I just started hand pollinating whatever was in bloom," he says.

However, Tiede explains, he became more strategic about his attempts after talking with sage enthusiasts at Salvia Summit gatherings and corresponding with Australian hybridizer John Fisher, who developed the recently introduced Love and Wishes Sage (Salvia x 'Love and Wishes') that is a hybrid of  Wendy's Wish Sage (S. x 'Wendy's Wish').

With a touch of self-deprecation, Tiede notes that hand-pollinating 200 plants in 2013 yielded 25 seedlings of which one was a "not very impressive" hybrid. Nevertheless, he was proud that his efforts gave birth to this cross of the Mexican native Orange Mountain Sage ( S. regla) and the Southwestern native Purple Sage ( S. dorrii). So try, try again he will. And volunteer, volunteer again they will as Richard Tiede says, because he and Bracey "enjoy interacting with the public to teach better gardening practices."

Need Some Interaction?
Thanks to Richard and Bracey Tiede for their generous volunteerism and for participating in our Sage Experts series. We know that you may want more information about some of the organizations through which they have learned and volunteered, so following are some helpful contact links:

Also, please remember to call or email us at Flowers by the Sea. We're always glad to answer questions about Salvias and companion plants as well as drought-resistant gardening.